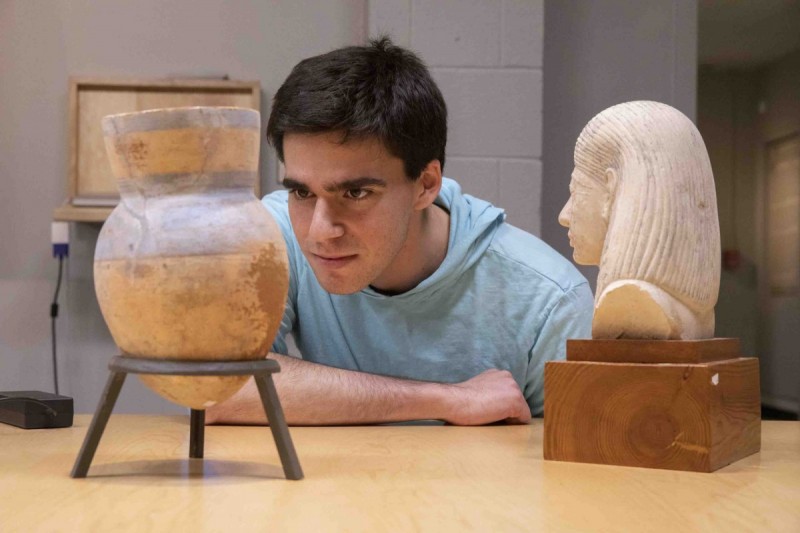 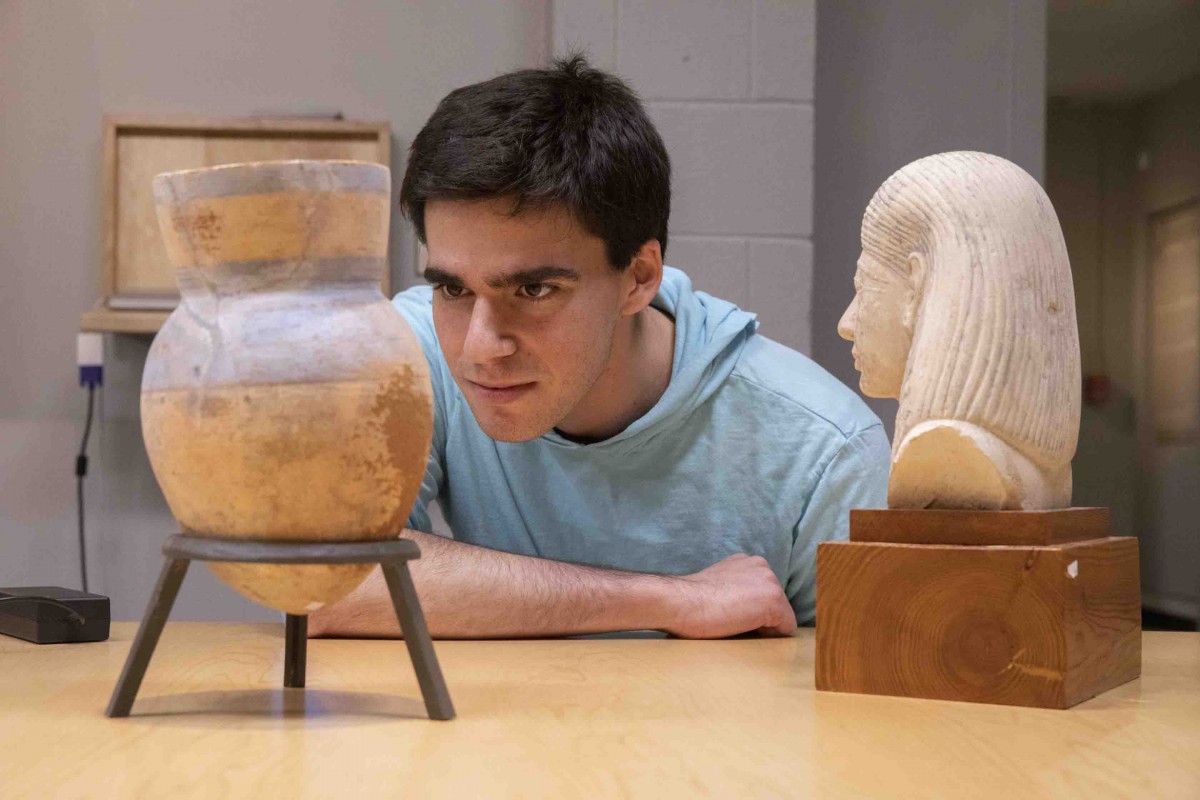 Binghamton University senior Doug Braun studies a vase and a bust from ancient Egypt for his curation project, "The Marvels of Materials." Image Credit: Jonathan Cohen.
By Jennifer Micale

Doug Braun’s future lies deep in the past — as a museum curator. Ancient cultures have always sparked his interest, making his triple major in history, anthropology and classical civilization an adventure.

“This is just what I want to do with my life, studying ancient civilizations,” said the Binghamton University senior.

He’s currently completing his coursework at home on Long Island, after the coronavirus pandemic prompted the University to move all its classes online. The pandemic also presented a significant obstacle: It forced the Binghamton University Art Museum to close its doors, making his second curated exhibition — “Marvels of Materials: Trade and Materiality in Ancient Egypt” — physically inaccessible to the public.

“All museums are rolling with what happened. Having it online is the next best thing,” Braun said.

As the name implies, the exhibition focuses on the exchange and use of materials in ancient Egyptian art, from ivory and wood to pigments and stone. Items encompass a range of sizes, from amulets to the bust of a Ptolemaic ruler. Geological Sciences Associate Professor Jeffrey Pietras scanned one item in the collection — a rather unassuming vase with traces of blue paint; the scan determined the blue pigment was cobalt, which gave clues about the object’s origin.

“Civilizations and cultures across the ancient world were always in contact with each other. Even everyday objects have a story behind them,” Braun said.

Assistant Professor of Classical Studies Hilary Becker advised the project last fall. When she first met him, Braun carried several tomes on Egyptian archaeology in his backpack, evidence of his dedication to the task.

“He carefully chased footnotes as he figured out what stories he wanted to tell about these objects and how far the materials that they were made from might have traveled,” she said.

It’s the second exhibition Braun had the opportunity to curate at the University. In spring 2019, “Reinventing the Past: Neoclassicism in Western Art” compared and contrasted the Classical and Neoclassical pieces in the museum’s collection. During the summer of 2019, he also interned in the Boston Museum of Fine Arts’ Art of the Ancient World department.

From the curation experience, Braun learned firsthand the importance of even the smallest details, from graphic design to the best case for display and the best placement of an object.

In Braun’s view, experiencing objects in person brings you closer to the culture that created them. It’s no longer a concept, but a physical link with the minds and hands of another era. But the current pandemic is forcing many institutions — museums among them — to get creative with their delivery system.

Overall, his research interests are broad, but include the meaning of animals in Greek and Roman art, and government-sponsored artwork in large city-states. Massive works of public art tend to symbolize state power, much as they do today.

“In studying ancient civilizations, you understand the modern world more and what humans have always been doing,” Braun explained.

The study of ancient art, in particular, lends itself to topics highly relevant to today’s world: conceptions of gender, for example, and the impact of cross-cultural contact. In effect, the foundations of today’s civilizations and the ideas that underlie them were laid in the distant past, at least in part.

In the pursuit of his dream career, he had guides and mentors along the way. Associate professors Tina Chronopoulos, Andrew Scholtz and instructor Valerie Spiller taught him Latin and ancient Greek, while assistant professors Hilary Becker and Jeffrey Becker instructed him in material culture and helped him focus his research interests.

He’s already been accepted into two master’s programs: New York University for art history and Cornell University for archaeology. He’s currently leaning toward Cornell, and ultimately plans to complete a PhD as well.

“It has been a privilege to work with Doug as a student over the past several years. I applaud his curiosity and his seeking out of academic rigor,” said Jeffrey Becker. “I am very glad to see students thinking seriously about material culture in a nuanced way.”