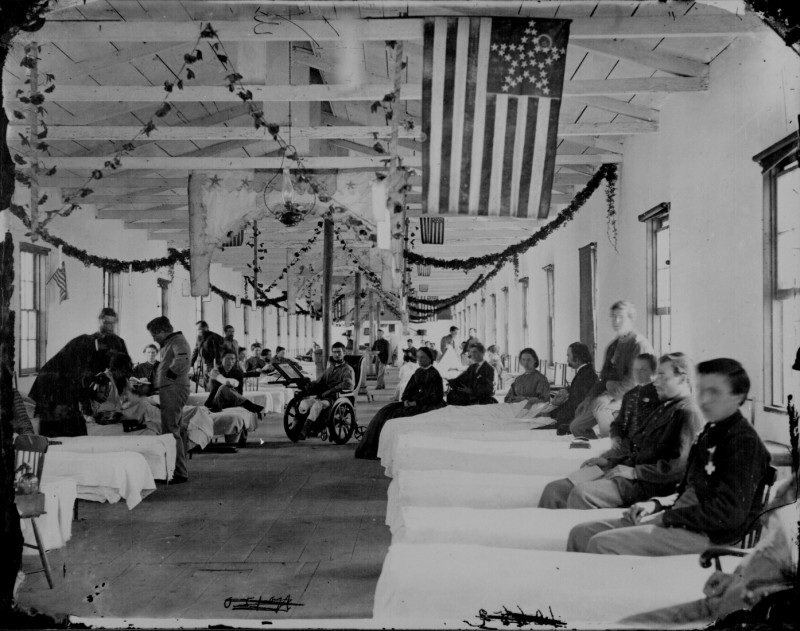 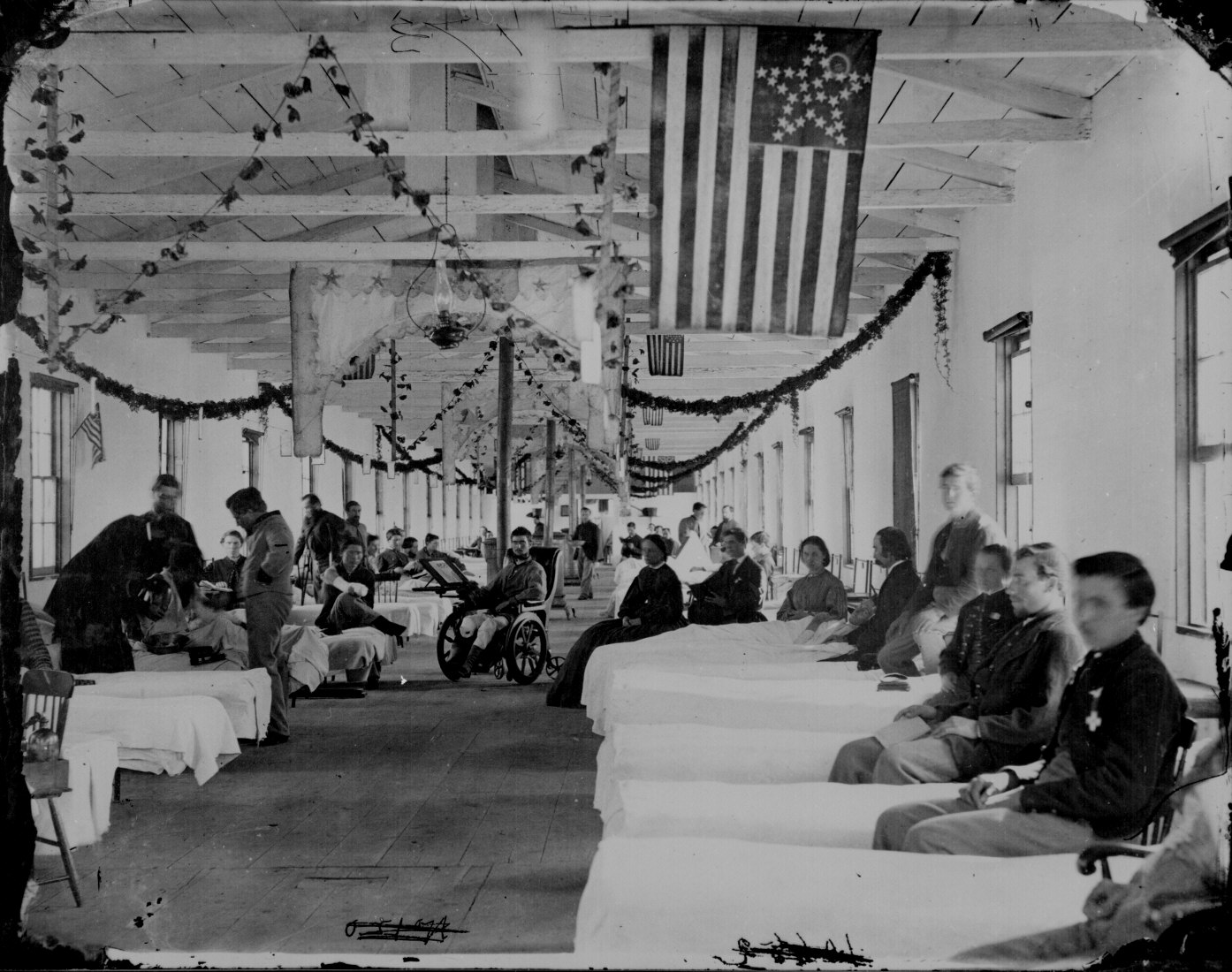 A ward in the Carver General Hospital, Washington, D.C., during the Civil War. Image Credit: National Archives.
By Jennifer Micale

America’s first opioid epidemic took shape on the battlefields of the Civil War, where physicians prescribed opium gum, laudanum or morphine to treat the pain of gunshot wounds and other injuries, as well as diarrhea and cough.

An update to this story about Jonathan Jones, who earned his PhD from Binghamton in 2020: In November 2021, he was awarded the top prize in the inaugural Chancellor Distinguished PhD Graduate Dissertation Awards competition.

The awards were created to recognize the highest and very best of PhD candidates in the SUNY system.

“The winners of the Chancellor PhD Graduate Dissertation Awards represent the best of SUNY and demonstrate that SUNY graduate students are pushing innovations, discoveries, and new insights in their fields,” said Chancellor Malatras.

Jones received $5,000 to be used for professional development. He is now an assistant professor of history at Virginia Military Institute.

Then as now, the opium poppy wrecked lives as much as it eased suffering. In the days before addiction became a household word, addicts were known as “opium slaves” — too unmanly to bear pain, or to kick the habit by force of will. Some lost their military pensions or spent decades languishing in mental institutions, largely forgotten by a history too ashamed to mention their plight.

Jonathan S. Jones, a doctoral student in Binghamton University’s history program, brought that hidden history to light with his dissertation, “‘A Mind Prostrate’: Opiate Addiction in the Civil War’s Aftermath.” The Texas native will head to Penn State this fall as a postdoctoral scholar in Civil War history through the George and Ann Richards Civil War Era Center.

The award is designed to give early career scholars the opportunity to turn their dissertation manuscript into a published book, a process that typically takes several years for historians. The Richards Center enables scholars to dedicate a year or more exclusively to their projects, ultimately allowing them to complete their books more quickly.

The center will also provide the opportunity for conversation with other scholars of the Civil War era, allowing Jones to see his manuscript through fresh eyes. He will also have the opportunity to gather feedback through workshops and talks in his research.

“This is an invaluable opportunity that will help me publish a better book, sooner,” Jones said.

As the first book-length study of opiate addiction among Civil War veterans, Jones’ project is particularly timely, considering the nation’s ongoing opioid crisis. In the 19th century, opium and its derivative drugs played an important role not only as painkillers, but as treatments for diarrhea and cough. Then as now, this treatment could lead to addiction, which affected large numbers of veterans both during and after the war.

These were the days before oxycodone. While some smoked opium, most patients took the drug orally by swallowing the “gum,” a dried, minimally processed version of the opium poppy’s “milk.” Laudanum, a combination of opium and alcohol, was also common; both were prescribed as both antidiarrheal drugs and painkillers.

During the Civil War, American doctors began prescribing hypodermic morphine widely for the first time, which is still used widely today in hospitals. In the postwar decades, morphine became a common way to take opiates.

“American doctors had long known that opiates were addictive, but there had never been such a huge number of people who became addicted all at once, as happened during the Civil War era,” Jones said. “So, in a lot of ways, the Civil War-era opiate addiction epidemic really was America’s original opioid crisis.”

Record-keeping was spotty in 19th-century America, so it’s difficult to pinpoint the precise number of veterans who became addicted to opiates. But the problem was pervasive, and alarmed public officials and the federal government.

People of the era lacked the modern understanding of addiction. Doctors, observers and addicts themselves referred to addiction as “opium slavery,” a loaded term considering the premise for the Civil War itself. In the view of the period, “opium slaves” who were unable to kick the habit simply lacked willpower and therefore manliness, which relied on strength and stoicism in the face of suffering.

Drugs and drug addiction weren’t against the law until around 1914 — but that doesn’t mean that addiction went unpunished. The stigma had serious repercussions for veterans, who risked losing their military pensions, which required them to meet certain behavioral expectations. Nineteenth-century doctors also believed that addiction could cause insanity, so addicted veterans risked incarceration in mental asylums, where they languished for decades, as the laws of the day made it extremely difficult to leave.

“And the conditions in these asylums — which were largely abandoned the mid-1900s — were horrific. They were unsanitary, violent places, and patients often met with untimely deaths,” he said.

Jones first stumbled on the topic while working on his master’s thesis in 2013 at Texas Christian University, where he researched post-traumatic stress among Civil War veterans. For his doctoral research, he relied on 19th-century medical journals and mental asylum records — the former recently digitized by Google — university libraries and archives preserving out-of-copyright library content. He also visited archives across the country to track down mental asylum records, including those of the Utica and Willard asylums in New York state.

His advisor at Binghamton University, History Professor Diane Miller Sommerville, notes that very little work has been done to date on opiate use in 19th-century America. Jones’ work is poised to make an extremely important contribution to both Civil War history and the history of medicine

His research also shows that effects of the Civil War lasted well into the 20th century, and is extremely relevant to contemporary national public health issues.

“If it is true, as I believe it is, that history provides us with a usable past, then Jonathan’s work on the ‘first’ opioid addiction public health crisis demands to be understood in its own right so we can better fathom the current crisis that has gripped our nation with devastating effect,” she said.

From Texas to Binghamton

A proud native Texan, Jones is a first-generation college student. Although his parents didn’t have the opportunity to attend college themselves, they strongly valued education, encouraging his interest in the Civil War by taking him to museums and reenactments and buying him books, he said.

He earned his bachelor’s in history from Dallas Baptist University before pursuing his master’s at Texas Christian. Before coming to Binghamton, he taught history at a Dallas-area high school, inspiring a new generation with his love for the past.

“I loved working with my high school students, whose curiosity about the world was totally infectious! In a lot of ways, my students, especially at McKinney Boyd High School in McKinney, Texas, inspired me to keep learning and to stay curious about history,” he said.

He feels similarly inspired by the college students he teaches, especially in Foundations of America, an introductory course in American history from pre-contact to Reconstruction, he said.

He came to Binghamton University specifically to work with Sommerville, one of the nation’s leading historians on war trauma. He counts Sommerville as one of his greatest mentors and encouragers, and she has made a lasting impact on his academic career.

For her part, Sommerville described Jones as “the most robust and exuberant archival researcher” she’s ever had as a graduate student.

“He has much more of a command of many of these sources than I do. In fact, I regularly turn to him with research and primary source questions,” she said.

She also cited his dogged work ethic and willingness to network, give panel proposals and craft journal articles. He has amassed a dozen grants and fellowships from external institutions that have funded research at archival sites, and also has an article coming out in The Journal of the Civil War Era, the flagship journal of Civil War historians — a major accomplishment for a graduate student.

He appreciates the history program’s strengths in women’s and gender history, as well as the Department of History’s reputation for producing innovative scholarship — and in helping future scholars find their place in an exciting field.

“The department has a rigorous curriculum of coursework and research, but also excels in mentoring PhD students as they look for employment in higher ed,” he said. “It takes a village to complete a PhD and secure a job as a historian!”