Biomedical engineering grad Shuofei Sun '20 learned how to apply for higher education on his own as a first-generation college student. 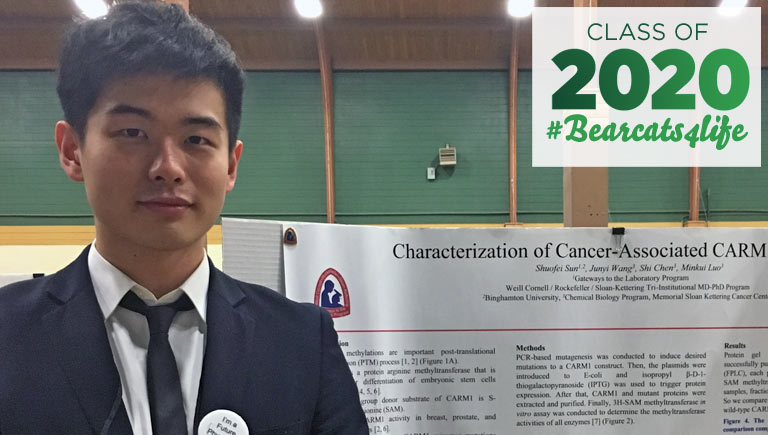 Biomedical engineering grad Shuofei Sun '20 learned how to apply for higher education on his own as a first-generation college student.
By Chris Kocher

Until he was 17, he and his family lived in Fujian, a province on the southeastern China coast. Moving to Brooklyn was a major cultural shift — but it also was where he discovered his love for biology and engineering.

A teacher encouraged Sun and helped him to get into a specialized program for high school students at New York City’s Rockefeller University, which focuses on biological and medical sciences, and it sparked a passion that led him to Binghamton University.

“I like to do research where I take cells, grow them in the lab and try to cure human diseases,” he said. “That process is very fascinating to me.”

In May, Sun earned his bachelor of science degree in biomedical engineering from the Thomas J. Watson School of Engineering and Applied Science. In his time at Binghamton, he earned an impressive list of honors, including the Provost’s Award for Excellence in Undergraduate Research (one of only two awarded on campus), the Undergraduate Research Award and the New York State Academic Excellence Scholarship. He also was a McNair Scholar and a College Science and Technology Entry Program (CSTEP) Scholar, and he appeared on the Dean’s List for his high grade-point average.

Binghamton initially appealed to Sun not just for its academic reputation but also because of its setting.

“I didn’t feel like I fit into the really urban environment, because I spent 17 years in a place in China that was more calm,” he said. “I like the more suburban feel on the Binghamton campus.”

At first, though, he focused solely on his studies, to the exclusion of everything else: “My freshman year was going to class, going to the library and going to sleep. I didn’t realize I could do so much more.”

As a sophomore, he worked up the courage to reach out to Associate Professor Sha Jin, who is the Department of Biomedical Engineering’s undergraduate director. He wanted to do research in her Tissue and Biomolecular Engineering Lab, and she saw his potential.

“Shuofei has always been passionate about biomedical research,” said Jin, whose own research on pancreatic cells seeks to cure diabetes. “He showed me his curiosity in finding solutions to tackle a challenging biomedical problem. He often enthusiastically discussed with me about his research plans. His oral presentations at the weekly lab meeting — including the slides he prepared — were outstanding, demonstrating a young scientist’s potential.”

In addition to his research and classes, Sun began to put down deeper roots in the University community. He joined the Tau Beta Pi Engineering Honor Society (rising to the rank of vice president) and became a member of the BME Department’s student advisory board, offering feedback on undergraduate curriculum and helping to recruit first-year students into the program.

Since fall 2017, he’s tutored fellow students in chemistry, mathematics and physics through Student Support Services and the Educational Opportunity Program. Not only can he help underrepresented students through their coursework, but he also can share his experiences overcoming similar obstacles to success.

“The thing we have in common is that we know social mobility is possible through rigorous education,” Sun said. “We want to change our lives — we don’t want to live the same life our parents did, not only to support ourselves but also our extended family. That mindset might not exist in people from a more advantaged background. We have more drive to succeed, and with a little bit of help, people like us can thrive.”

His undergraduate research reached its pinnacle with “Angiogenic factors promote human pancreatic islet cell development from stem cells,” a study where he is the second author. It is currently under review by a professional journal.

Sun’s next stop is just up the road: He will pursue a PhD at Cornell University in Ithaca starting in the fall. He’s already signed up for lab rotations there, pending reopening after the COVID-19 pandemic. After that, he would love to have an idea good enough to strike out on his own as an entrepreneur; his fallback plans are joining academia or working in the biotech industry.

No matter where his path takes him, his mentor is sure that he will do well.

“Shuofei is truly an outstanding student,” Jin said. “He is humble and always keen to learn more. He works diligently. I believe he will be very successful in his career development.”

Looking back on his undergraduate years, Sun is thankful that he learned self-confidence, biomedical knowledge and research skills during his time at the Watson School.

“Although my time at Binghamton is coming to an end, I will never forget the sense of belonging and home,” he said. “I made friends in the department with fellow students and professors, and with people at Binghamton in general. I don’t think this feeling will ever end.

“Maybe it’s a good thing that we didn’t have a graduation ceremony, so that whenever I come back for a visit, I might still feel like a student here.”