Orphans and exiles: Research shows the impact of family separation 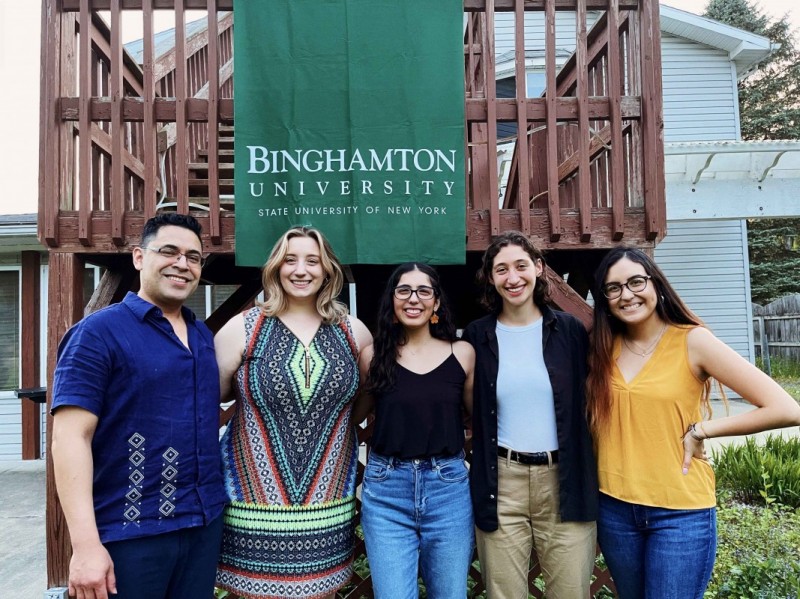 The news reports surrounding the Trump Administration’s “zero tolerance” policy on undocumented immigration were stark: children separated from their parents, uncertain whether they would ever see them again.

All told, the official zero tolerance policy lasted only a few months, from April to June 2018. But family separations occurred before and after those dates: at least 5,512 children were separated from their families since July 2017, and 1,142 families were separated even after the policy formally ended.

Along with four Binghamton students, Assistant Professor of Human Development Óscar F. Gil-García put a human face on these tragic statistics in “’It felt like my son had died’: Zero tolerance and the trauma of family separation.” Recently published in the journal Latino Studies, the article documents the impact of immigration policy on a Central American family that became separated in 2017 from their son David, a minor and a United States citizen.

As the Biden administration begins to reunify families, the case of David and his family provides an opportunity to comprehend the long-term harm inflicted by family separations, said Gil-García, who is also affiliated with Latin and Caribbean Area Studies (LACAS).

“Immigration policies in the U.S. and Mexico are really damaging to migrant populations; they paint migrant populations as not human, but as criminals and as undeserving,” said co-author Sarah Vener ’22, an English and political science dual major. “We see that this creates human rights abuses that have real impacts on people throughout their lives — and those impacts last.”

The interview with David came out of a larger project that Gil-García has been working on since around 2012, concerning members of a Maya community living in the Mexican state of Chiapas. Gil-García worked with these stateless individuals on obtaining legal status in Mexico; David’s parents, Evelyn and Carlos, were among them.

The two had fled Guatemala in 1985 to escape that nation’s civil war. Lacking legal status and job opportunities in Mexico, they crossed the border to work at an Alabama sweatshop. David was born in the United States in 2003, making him a U.S. citizen.

He first became separated from his father at only 4 years old, when he and his mother returned to Mexico, concerned about rising deportations; Carlos joined them two years later. At the age of 14, David expressed interest in returning to the United States for his education. His father joined him, believing that his son’s U.S. citizenship meant that he could accompany him. That proved not to be the case.

The two were immediately separated by immigration officials. After two months’ detention, Carlos was deported to Mexico in February 2018. David ended up in the Arizona foster care system, and neither knew the whereabouts of the other for months.

Frantic, Carlos and Evelyn enlisted Gil-García’s help in tracking down their son, who ended up in three different foster-care facilities. Unable to speak English, he was at times unable to communicate in his group home, and struggled with eating and sleeping. Gil-García worked with David’s family to expedite his release. Just as the coronavirus began to spread, David was finally able to leave the foster care system and live with a family member in California.

While David’s story may seem uniquely tragic, he’s not alone, the researchers stress; more than 5.9 million children who are citizens of the United States have at least one undocumented parent and live with the constant fear of family separation.

Such separations have long-lasting health consequences for both the children and their families, including forms of post-traumatic stress disorder (PTSD), anxiety, depression and other conditions that can shorten life expectancy. Family separations also meet the definition of an enforced disappearance, which is considered a crime in international law — and even the United Nations’ definition of torture, the researchers note.

For all the pain they inflict, zero tolerance policies are largely ineffective in deterring migration; in fact, they have the opposite effect, Gil-García noted.

“These kinds of separations are actually creating new forms of migration and compelling these individuals to re-migrate,” he said.

This paper wasn’t the first that Gil-García has published with his students as co-authors; he also wrote a paper with another mentee focused on the potential impact of expanding healthcare coverage for undocumented migrants.

“I felt that this would be a learning experience for my students and also for me,” he said.

Vener did have prior grounding in issues surrounding migration, having worked on a photo exhibit connected with the original 2012 project concerning the Maya community in Mexico.

“I worked on the photo documentary exhibit, so I had learned a lot about how to combine art with social science in order to tell a narrative that also advances social justice and educates,” said Vener, who used her prior knowledge of the individuals’ stories to help inform the article.

The students devised questions for the interviews with David’s family, which were conducted by Gil-García. They also helped analyze the data, and write and edit the paper. All told, the paper took around two years from the initial idea to publication.

Gil-García and his research team have other projects in the works concerning experiences like that of David and his family. One will conceptualize a heuristic model for practitioners who want to help unaccompanied minors cope with the trauma of family separation.

“He really let us take the lead on the paper and make it our own, which was just an incredible experience,” Vener reflected. “It taught me so much about how to research, how to write and just how to take initiative.”