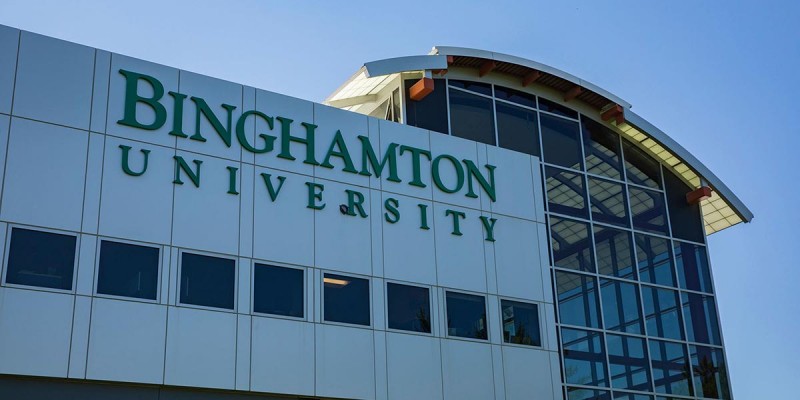 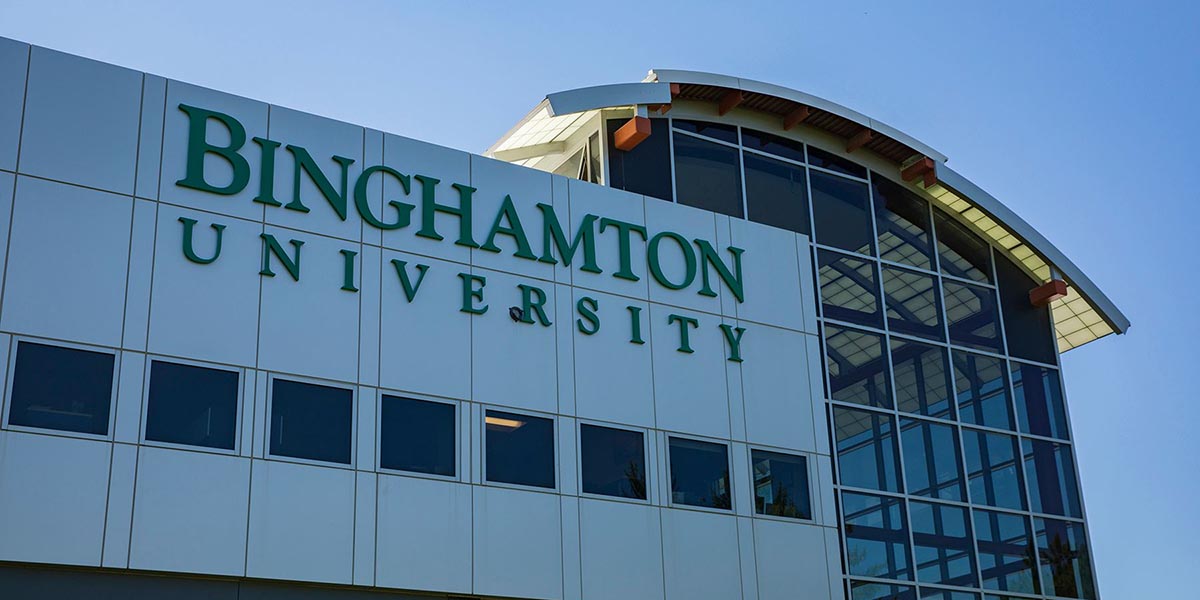 Seven Binghamton researchers received word during the past few months that they are recipients of CAREER awards from the National Science Foundation. The grants are the agency’s most prestigious awards for early-career faculty members, supporting five years of work and encouraging the integration of education and research.

It’s the campus’ most successful year ever with the NSF program, says Bahgat Sammakia, vice president for research. “We’re excited about these CAREER winners,” he says. “They’re all outstanding scholars and educators, and they’re poised to do work that will make a significant impact on our campus and beyond. It’s especially impressive that three of the winners come from a single department, and I look forward to seeing how we can learn from the model established by our colleagues in computer science.”

Some of the projects have begun already; others will start within the next year:

According to classic theories of communication, the sender and receiver have the same goals. Both want to share whatever the message is, as free of errors and interference as possible.

But what if they have different goals? With our 21st-century technology increasingly stitched together using Wi-Fi or 5G networking, competing companies could try to prioritize their messages or otherwise seek an advantage.

Akyol has ideas about how to solve those concerns, and they involve using game theory to level the playing field again. He has three key goals:

Akyol expects increasingly “misaligned” intentions as smart homes connect with appliances or smart vehicles interact on busy interstates. How will, say, Ford and Tesla cars talk to each other with a certain level of trust?

Because the combination of game theory and machine interaction is mostly uncharted territory, Akyol is looking forward to the discoveries ahead in his research. “It’s exciting because we are studying from scratch,” he says.

Discussions happening on social media drive a lot of public discourse and news coverage. Some people use platforms such as Facebook, Twitter and Reddit to make positive connections, but others prefer to sow misinformation and hate.

Given the popularity of such platforms, it can be difficult for researchers to wrap their heads around what is being shared and how it affects our opinions. Blackburn devises ways to make online content easier to gather and sort.

Although this technology to monitor online sentiment could have many uses, Blackburn has a specific goal.

“We could better understand violent content or hate speech online that is very coded, or we could identify misinformation so that people can’t hide this type of behavior by using just images,” he says. “That’s my personal passion and the reason why I’m developing it.”

As we go about our day, our eyes collect visual data that our brain sifts through. How does your brain know which visual stimuli require immediate attention, and how does attention really work? That’s what Gaspelin hopes to find out.

His research concerns whether certain kinds of visual stimuli can automatically distract us. There are times when we need to notice sudden stimuli to avoid danger, he notes.

Gaspelin would like to know whether the brain processes behind attention are initiated even before eye movements are physically generated. We move our eyes all the time during visual search, whether glancing about for road hazards or looking for a can of soup in the store.

“Understanding the basic mechanisms of visual attention really is crucial to making society function efficiently,” he says. “If we could understand how to develop better visual warning signals — for example, if we could understand how to better control motor vehicle operators’ attention or better control children’s attention in a classroom — we could end up having a much better society as a whole.”

Hua’s project seeks to answer a broad question: Why are some communities more susceptible to disease than others? Generally, communities with higher levels of biodiversity are expected to be less vulnerable to disease. But that’s not always the case.

Her new project asks: Do differences in pesticide tolerance strategies influence why biodiversity does not always protect communities from disease?

This work provides a different perspective on the relationship between biodiversity and disease. Typically, biodiversity brings to mind the range of species that make up a healthy ecosystem. But diversity also exists within species. This variation may play a role in community disease outcomes, but our understanding of it is limited.

“Because this grant focuses on how environmental change can have cascading consequences on disease, we get the chance to show people how interconnected the world is,” she says. “…I hope that this education component will provide such an opportunity to show how protecting the environment and biodiversity could directly affect things like disease transmission and our health.”

Imagine someone handing you a fancy cake and asking you to figure out the recipe as well as the ingredients’ origins. That process is similar to the research Prakash does with computer software. And yes, it can be as challenging as it sounds.

Prakash uses binary analysis techniques to understand the inner workings of a piece of software and to identify potential holes that could let hackers in.

“One problem with software today is having bugs in the programs that can lead to vulnerabilities,” he says. “There is a pressing need for accountability of software that we use. Although we use software by a particular vendor, the actual coding may have been outsourced to a third party. … When we factor in countries or other actors with a vested interest in intentionally introducing vulnerabilities into software, it becomes extremely important to establish provenance.”

Because defenders often don’t have access to the original source code for proprietary reasons, analysis of the industry-mandated application binary interface (ABI) can provide better information for consumers to decide the security of the software.

Prakash became interested in binary analysis as a graduate student.

“It is one of the harder topics in computer science,” he said. “You have very little information to go by. In principle, the binary contains all the information a processor needs, but what the processor consumes is very different than what humans can make sense out of.”

Read more about his project in BingUNews.

Manufacturing and processing plants increasingly rely on automation to reduce costs and keep things running smoothly. A sensor takes a reading, a controller decides the right course and an actuator carries out the task.

However, the two main industrial wireless standards that specify how to connect those sensors, controllers and actuators — WirelessHART and ISA100 — were developed nearly 15 years ago. Technological advancements have been rapid since then, and much of the day-to-day network management has been guesswork by human operators.

“Traditionally, 40 or 50 years ago, a manufacturer would use cables to connect everything, but cables are too expensive to deploy and maintain, and they are very inconvenient when you want to add a new process requirement,” he says. “So now companies are trying to use wireless technology to replace all those cables.

Sha plans to use machine learning to provide new methods to optimize network performance. By cutting down on human error, Sha sees networks that are more efficient, more secure and better at responding to problems.

“I’m hoping that the outcome of my research can contribute to the post-pandemic recovery for the manufacturing and processing industries,” he says. “It’s been so hard for them because of social distancing, and some plants may be shut down due to high infection rates. This new tactic will decrease human involvement in the network management process.”

Set into motion by light, photoredox reactions forge new chemical bonds that are difficult to create with traditional laboratory techniques. Used in the synthesis of pharmaceuticals, this process can lead to the creation of new drugs.

There’s only one problem: No one knows exactly how photoredox reactions work.

Enter Swierk, whose lab focuses on the intersection of light and chemistry, and particularly how light can drive chemical reactions.

“There has been very little work on actually understanding what happens on an atomic or molecular level when the reaction absorbs light — what are the steps that you go through to form the bond,” he says. “On the one hand, this chemistry works and it’s being used in industry. On the other hand, we don’t understand how it’s working.”

The pharmaceutical industry is particularly interested in photoredox reactions, which have grown in importance during the past decade or so. There are other potential applications, too; this type of catalysis can, in principle, be used for any kind of small molecule synthesis, such as in the energy sector.

Learning more about how the process works may lead to faster reaction rates, the development of new products and increased product yields.

Swierk’s project also has an educational focus: aiding in the transition of community college students to the academic rigor of a four-year school. “We’re trying to do a better job of creating a more equitable, inclusive environment that can support student success,” he says.