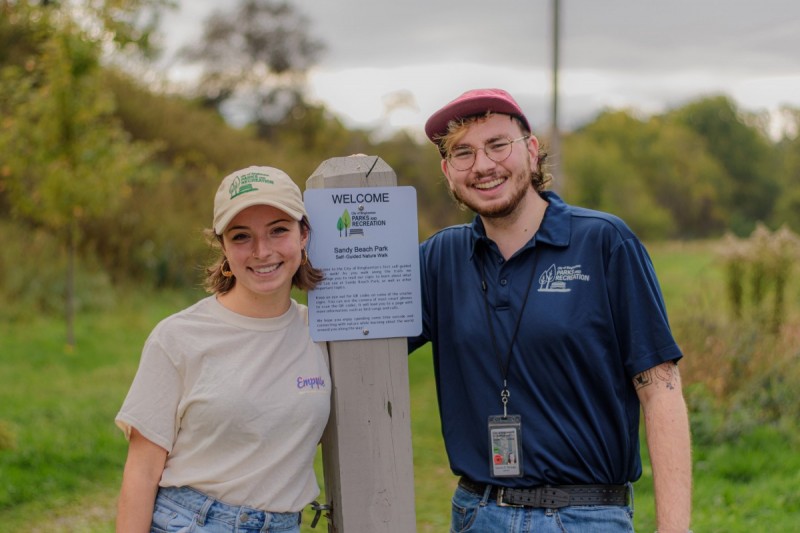 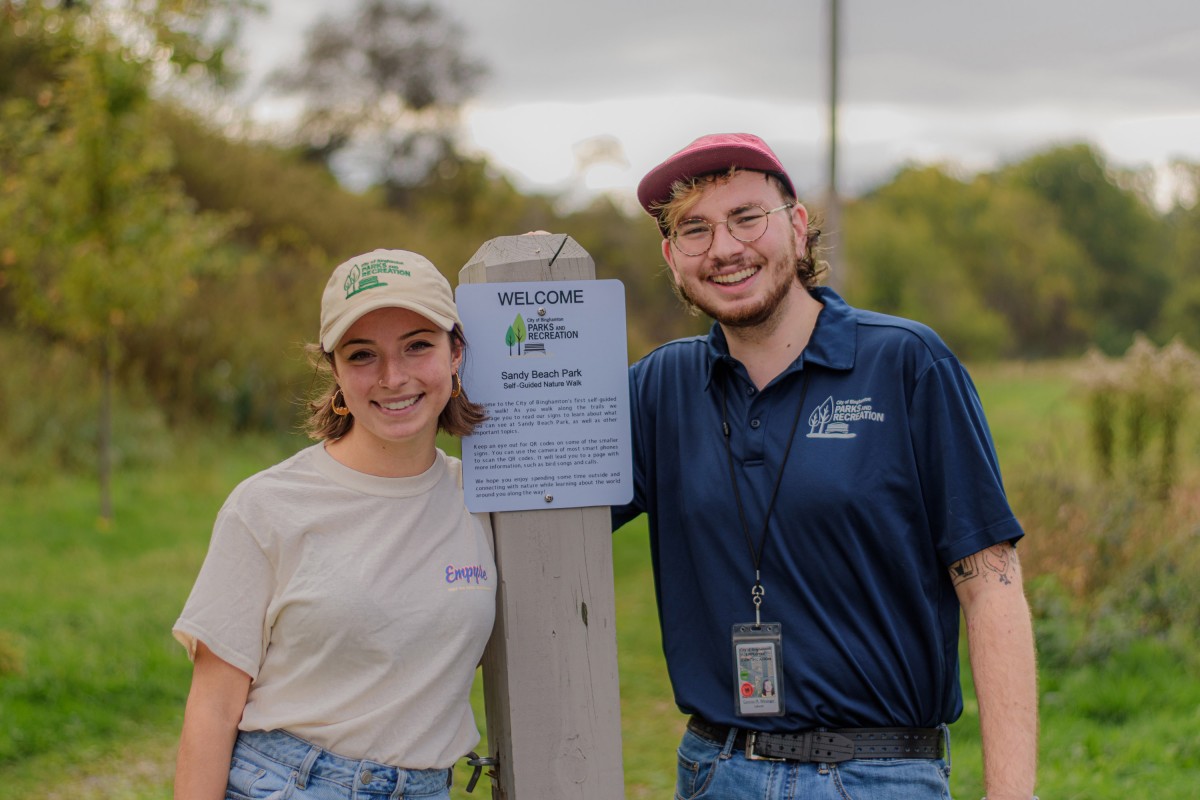 What was once an abandoned tennis and basketball court is now a public park filled with greenery, pollinator gardens, hummingbird feeders and more. Sandy Beach Park on Binghamton’s South Side has been revamped by Binghamton University master’s student Cam Winzinger and alumna Anna Shaheen ’20, who worked with the City of Binghamton Parks and Recreation Department to create an innovative educational nature trail.

“This was the first project of its kind for the city, something with an educational component that turns underutilized space back into greenspace,” said Winzinger, who earned his bachelor’s in environmental science and is now pursuing a master’s in biological sciences. “I think there’s a lot of opportunity for that, not just in Binghamton, but everywhere. I would love to see projects like this become more commonplace.”

Also a graduate from the environmental science program, Shaheen currently works for the Parks and Recreation Department. The vision for the green space project came from now-retired commissioner Paul Palmer, who hired Shaheen and Winzinger.

Both grew up surrounded by nature, with parents who encouraged them to learn more about it. They recognize, however, that not everyone has these opportunities and expanded on Palmer’s initial plan with a nature trail that features signage on environmentalism and species identification. The duo also collaborated with the Summer Fun Program, leading nature walks and hikes for kids in the community.

“It was just awesome to see them engage with something they don’t normally get contact with,” Shaheen said. “We’re hoping this could be a place that schools could come and use.”

Creating the nature trail was an educational experience in its own right. Both Shaheen and Winzinger learned about the intricacies of environmental planning and the realities of working with city government.

The ecology itself is central to the project: Sandy Beach is located in a flood zone, which shaped every aspect of the park’s revitalization, from the trees planted to prevent riverbank erosion to the waterproof signs. All the plants are native to the Binghamton area, which means there will be no harm if any are washed into the river and transported somewhere else.

Shaheen and Winzinger both credit their Binghamton education with giving them the skills and knowledge they needed to make this project a success.

Shaheen, who wanted to make Sandy Beach a local bird sanctuary, drew on her undergraduate ornithology class; the park is the perfect location for birds because of its mix of wetlands and woodland, she said. They installed nesting boxes for Eastern bluebirds and tree swallows, and plan to add a platform to attract Broome County’s first pair of nesting ospreys. While ospreys can be seen in the area, they don’t nest here due to a lack of nesting sites, she explained.

For his part, Winzinger drew on his entomology classes and field biology labs to aid him with species identification. He studies under Associate Professor of Biological Sciences Julian Shepherd, who served as a mentor throughout the project; the student and alum are dedicating the trail to Shepherd for his help and encouragement.

As the ecosystem shifts and changes through the years, so will Sandy Beach Park. Both Shaheen and Winzinger hope its educational mission will expand, perhaps encompassing the nearby woodlands.

“How can we expect people to care about science and what’s going on around us if they don’t have means to access it or understand it?” Winzinger said.