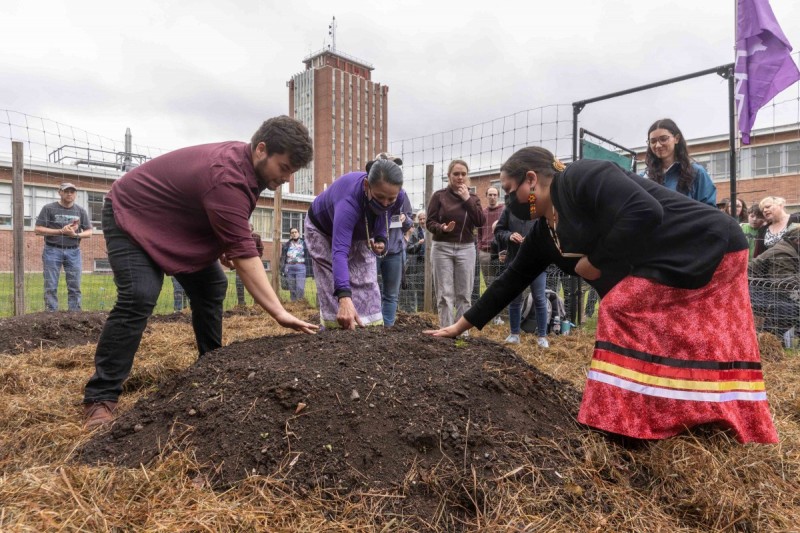 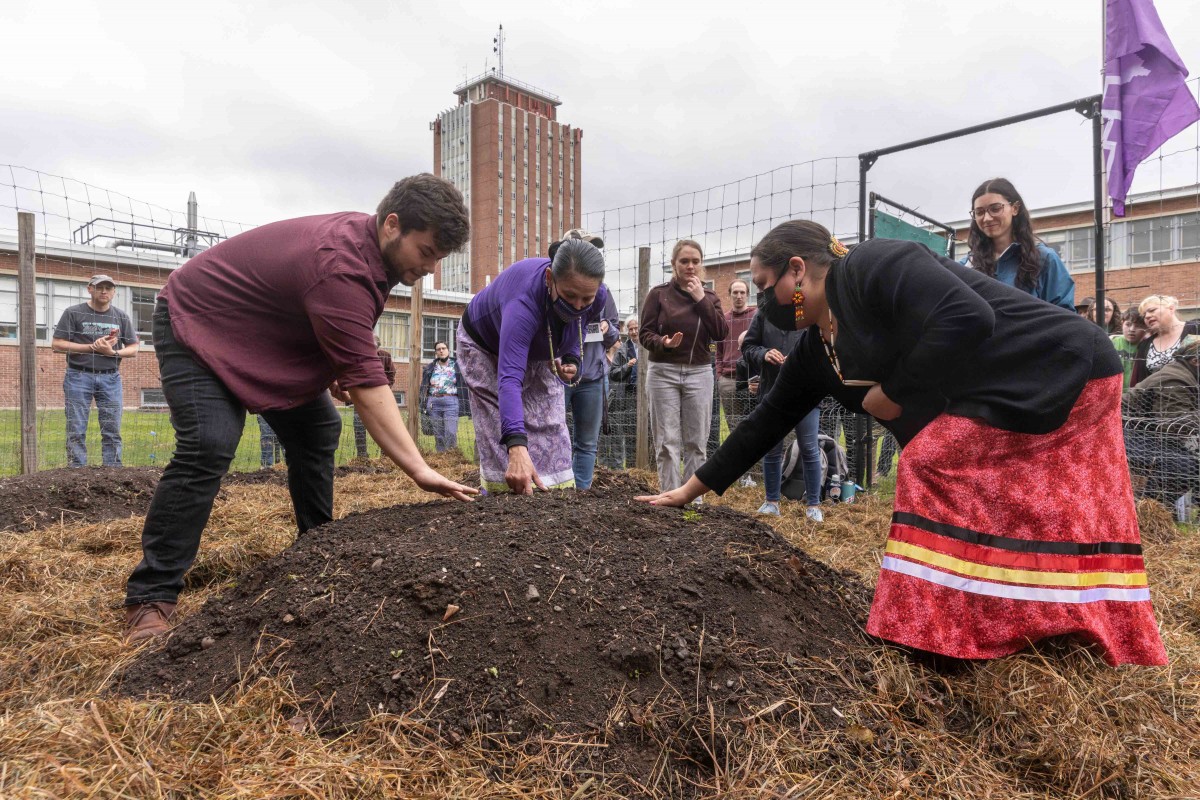 Onondaga Elder Tony Gonyea’s soft words brought the blessing to the garden plot, where each mound represents a tribe of the Haudenosaunee Confederacy. It’s been at least 200 years since such words were spoken here, the mounds carefully constructed, the seeds of the Three Sisters placed therein.

Binghamton University’s new Three Sisters Garden is more than a spit of land where corn, beans and squash grow. It also cultivates a living relationship with the Indigenous people who call the land on which the University now stands their ancestral home.

“We’re excited to return here to our ancestral lands. It’s monumental for us when we get to plant somewhere; it’s almost like stepping back in time,” said Angela Ferguson of the Haudenosaunee Eel Clan, who supervises the Onondaga Nation Farm in Central New York. “I really believe that gardens are the places where the path of healing, reconnection and understanding begin.”

On May 4, the University hosted a panel discussion with Ferguson, Sarah Patterson of the Onondaga Nation Farm and Ethan Tyo, a member of the Akwesasne Mohawk and a graduate student at Syracuse University, about the Indigenous connection to the land. A traditional Haudenosaunee Thanksgiving blessing of garden space followed, after which members of the campus community joined the planting effort.

“The planting of the Three Sisters — beans, squash and corn — is a tradition not only rooted in making sure the earth is preserved, but also making sure that we are sustained, that we eat and live,” Binghamton University President Harvey Stenger said before taking part in the planting.

The garden is located in the Science I courtyard and will be maintained by volunteers over the summer months. During the academic year, classes will be involved in the site, from anthropology and environmental sciences to history and more.

“One of our big goals with this garden is not only to create a space for the Three Sisters, but to include Indigenous knowledge in the curriculum right alongside our biology programs that focus on watershed and ecology, our anthropology programs and our history programs,” said Assistant Professor of Anthropology BrieAnna Langlie, who organized efforts on Binghamton’s end in collaboration with Barrett Brenton, the faculty engagement associate for the Center for Civic Engagement, and representatives from the Onondaga Nation.

Corn, beans and squash are traditionally planted together in Haudenosaunee agriculture; the beans help fix nitrogen in the soil while using the corn stalks as a trellis, while squash vines crowd out weeds and retain soil moisture.

Rooted in the land

The Onondaga Nation Farm preserves the Haudenosaunee’s heirloom seeds, thousands of different varieties. Because Binghamton was once home to the Tuscarora, Ferguson chose Tuscarora seeds for the University’s Three Sisters garden.

The 13-acre farm began in 2015, on ancestral land that was returned to the Onondaga people; its first crop consisted of strawberries — sacred to the Haudenosaunee — transplanted from the Nation itself. Corn, beans and squash followed in a seven-year rotation system. Today, the farm produces enough food to feed each member of the Onondaga Nation for four years, which provides needed reassurance in a time of food shortages and insecurity, Ferguson said.

Illnesses such as diabetes, heart disease and cancer are found all too often in Indigenous communities, the legacy of being forcibly separated from their ancestral lands and sent to marginal, polluted spaces where hunting, fishing and farming weren’t accessible or safe, Tyo said. It’s taken generations to revive reservation land to a more healthy state, he said.

Growing up, Tyo was significantly overweight and felt torn between his culture and the non-native world. He later transitioned to a plant-based diet at Syracuse University, improving his health; at the same time, he became involved with Indigenous student organizations there.

Food became the way he connected with his origins, and he deepened his understanding of nutrition, health, and the cultural and spiritual meaning of food. That led him to pursue a graduate degree in food science, and also to establish a rooftop garden six stories up in downtown Syracuse.

“I watched things sprout up from nothing. I created an ecosystem; spiders and butterflies came from nowhere, solely because I brought the seeds,” he recounted.

Like Tyo, Patterson was also disconnected from her Indigenous heritage, although she grew up only five minutes away from the Onondaga Nation; she was adopted into a non-native family at 6 months old. Growing up, however, she found a deep connection with the land itself, collecting hickory nuts and snapdragons for her mother, feasting on wild strawberries and learning where the deer bed down in the winter.

Her high school bus driver, also native, noticed that she was reading a book about her heritage and invited her to her first longhouse ceremony. Later, at Onondaga Community College, she connected with other native students and began learning the language, culture and stories in earnest.

The Three Sisters are part of the Haudenosaunee creation story, the grandchildren of Sky Woman, whose fall from the heavens precipitated the creation of Turtle Island. Sky Woman’s daughter perished while giving birth to twins, and the grieving ancestress covered her body with an earthen mound. Strawberries grew from her daughter’s heart, wild potatoes from her feet, tobacco from her head and corn, beans and squash from her body, Patterson recounted.

The story prompts us to consider our relationship with food and how it sustains us, she said. In her own journey, Patterson began working on the Onondaga Nation Farm and eventually growing her own food.

During the panel, she held up an ear of white corn — the very first crop she grew.

“Each kernel, to me, represents all my ancestors. It represents Sky Woman and her daughter. There’s a spiritual relationship,” she explained.