Ship to shore: Paleontologist contributes to ocean expedition from Binghamton 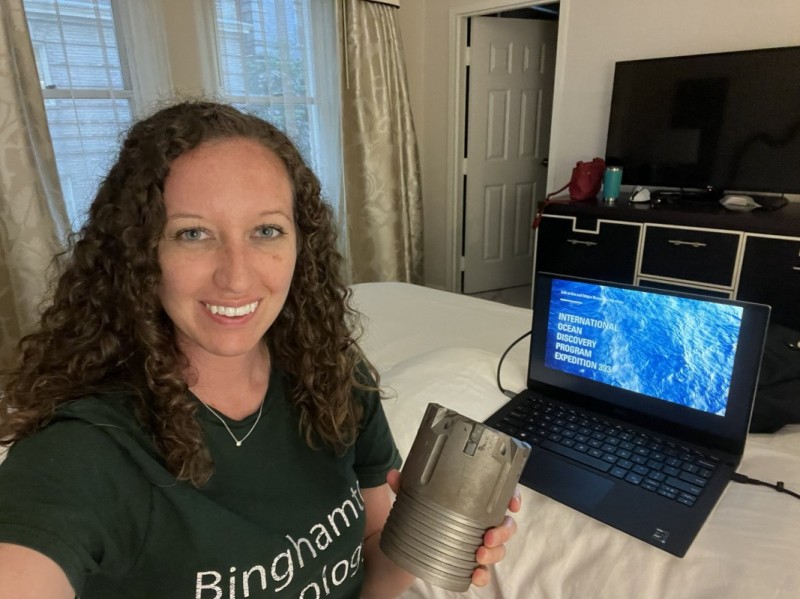 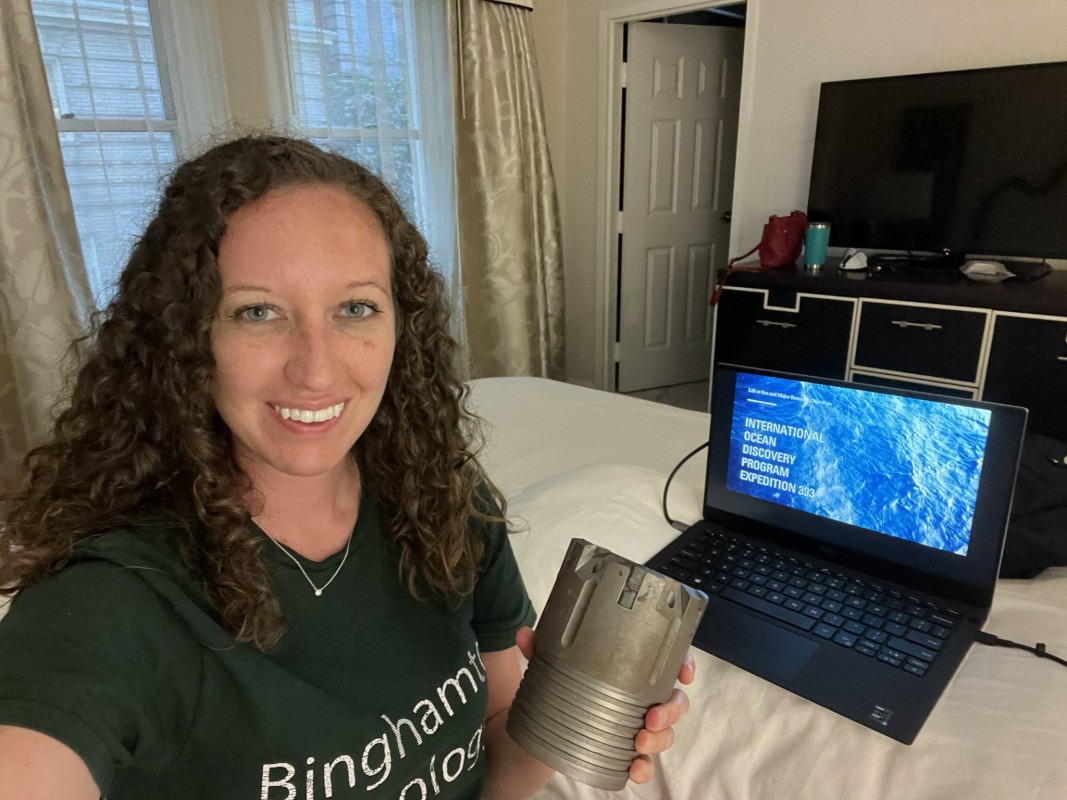 Paleontologist Adriane Lam takes part in a Zoom conference with an adult education class in Massachusetts, where she discussed the role that shore-bound scientists play in research with the International Ocean Discovery Program. Image Credit: Provided photo.
By Jennifer Micale

Paleontologist Adriane Lam planned to return to the sea this summer, dating tiny fossils during a two-month seagoing expedition with the International Ocean Discovery Program (IODP). Instead, she will play an integral part in the research from the shore.

The expedition is headed to the southwest Atlantic, where scientists will drill sediment and rock cores to reconstruct the ancient climate and investigate microbial communities living in seafloor rocks. Located in the middle of the ocean and far from any landmasses, the destination is the Mid-Atlantic Ridge, an underwater mountain range.

“This is where new ocean crust is being produced, so we have magma coming up to the surface and it’s pushing the older crust out. This is essentially how part of plate tectonics work,” explained Lam, a Presidential Diversity postdoctoral researcher in geological sciences and environmental studies.

Underwater mountains such as the Mid-Atlantic Ridge can allow scientists to investigate how ocean waters interact with seafloor rocks through analysis of sea floor chemistry. For a glimpse of this chemistry, the expedition will drill through the sediment to recover pieces of the basalt that forms the sea floor. Few samples of ocean crust have been recovered from this part of the Atlantic, and little is known about the microbial communities that live within its rocks, Lam said. The rock itself also holds clues to the past; the basalt that forms from magma on the ocean floor contains magnetic minerals, for example, that indicate the alignment of the Earth’s magnetic poles at the time of their formation.

The expedition will also recover the sediments sitting on top of the basalt and use the microscopic fossils within them to reconstruct the Earth’s ancient climate and ocean circulation. The deepest site they’re drilling will date back 60 million years, but Lam — who will be working with the tiny fossils in the sediment — will look at warming and cooling events during the past 23 million years.

Lam is in the biostratigrapher group, meaning that she uses tiny fossils called planktic foraminifera to gauge the age of the sediment or rock sample. The drill, after all, isn’t just passing through layers of rock; it’s passing through the layers of time that formed them, she explained.

About the size of a sand grain, the foraminifera are composed in part of calcium carbonate, much like seashells, which promotes fossilization. By identifying the particular species — which have evolved or gone extinct through the millennia — paleontologists are able to identify the age of a sediment sample.

Cores are about 10 meters long; at the end of each core is an extra 10 centimeters of sediment called the “core catcher.” When a core is brought onto the ship, technicians take apart that core catcher on deck.

“Core on deck!” the driller announces on the intercom.

The scientists run out to the core deck, including the paleontologists, who scoop up sediment from the core catcher for their samples. Lam is deeply familiar with the process; in 2017, she went on an IODP trip to the Tasman Sea in the southwest Pacific.

“It’s just like a cereal bowl full of sediment,” she explained. “We take it right back to the lab and process it. We’re able to tell everyone how old that sediment is within about 5 to 20 minutes. It goes really fast once we’re drilling.”

Travel mishaps prevented Lam from getting on the ship as planned this trip. She attempted three times to fly out to South Africa from Upstate New York, only to have each flight unexpectedly canceled. All expedition participants had to undergo a strict weeklong quarantine once in Cape Town and Lam, sadly, couldn’t reach the destination on time.

Instead, from her Binghamton lab, Lam is analyzing samples obtained from two previous expeditions that created reentry cones — spots the current expedition will use to drill into the seafloor. With them, she will create an age model of the sediments found in the drilling area, aiding the paleontologists on board, with whom she is in frequent communication.

During every expedition, researchers must write a report for every site that’s drilled, detailing their findings and synthesizing different sources of data. Lam will be doing that as well, working with the scientists on board.

“I still have a big role in the expedition. We also have a Slack channel set up, so I’ve been editing chapters and communicating with the other paleontologists on the ship in real time,” she said. “On Saturday, we have a big Zoom meeting together to talk about what we’re seeing.”

She has other opportunities, too. Her science blog, Time Scavengers, will share the profiles of participating scientists during the course of their journey.

The expedition also offers Zoom sessions that give scientists the opportunity to engage in community outreach with classrooms, museums and other venues. Lam herself participated, chatting with an adult education class in western Massachusetts about the important role shore-bound scientists play on ocean expeditions.

Since her flight cancellations, she also had the opportunity to attend a Washington, D.C., workshop with more than 80 fellow scientists on science education and communication related to ocean drilling.

“There’s still a lot to do as a shore-based participant in the expedition. And I can still work here (at Binghamton) with my students, too, and start setting up the lab for my first PhD student, who is coming in August,” she said. “There are some silver linings.”