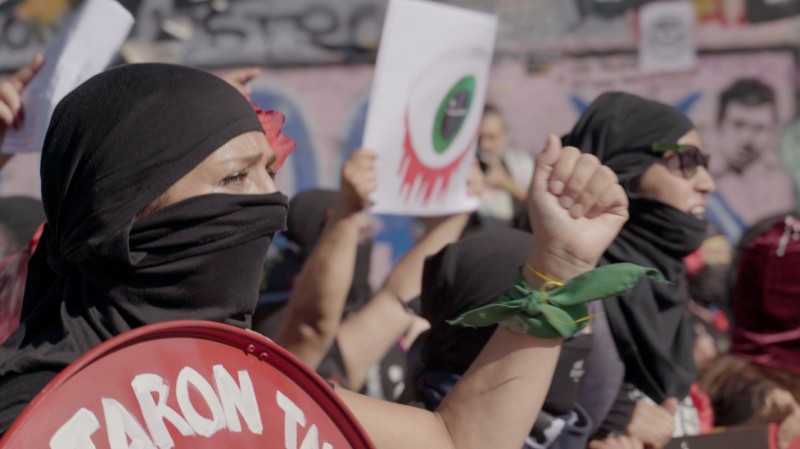 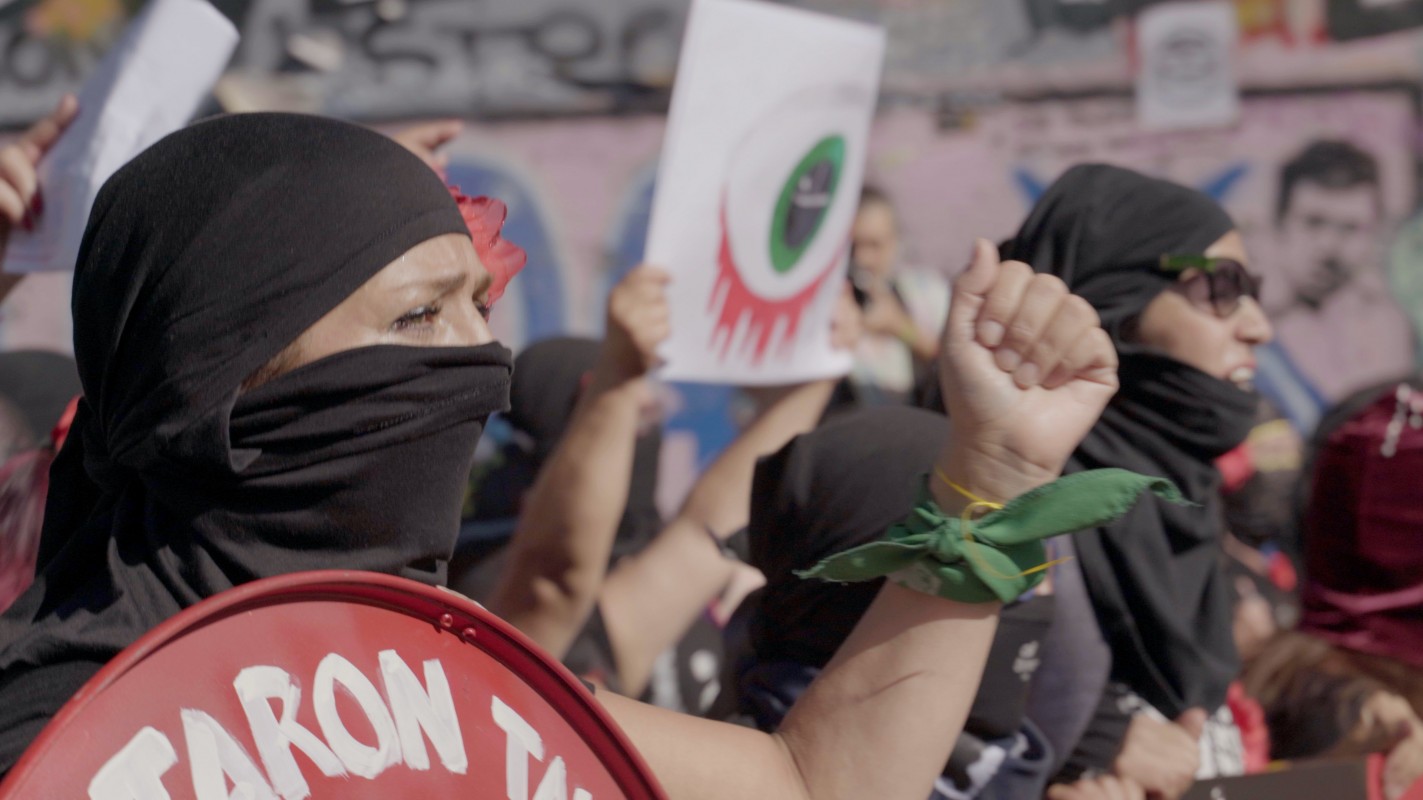 Virgilio (Vee) Bravo ‘95 was still in bed on Oct. 20, 2019, when he began scrolling through news headlines on his phone.

What he saw jolted him awake.

In Chile, high school students took over a subway station in Santiago, protesting a fare hike. The situation took a dark turn when they were met by the Chilean military, dispatched by the president and armed with rubber bullets. All told, around 30 people died in the months of violence that followed and thousands were injured and arrested.

A continent away, Bravo sprung into action, assembling a team of filmmakers and producers. Within three weeks, they were on the ground in the conflict-torn city, creating an indelible record of the goings-on: a meaningful act in a country that had spent the ‘70s and ‘80s under the sway of a military dictatorship. Censorship was a reality in those days, covering up the brutality of Augusto Pinochet’s regime; Bravo and his team were determined to prevent that from happening again.

“I felt compelled. I’ve been doing all this work in New York, working with communities of color, the communities that I identify with. How could I not respond to what’s happening in my native country?” remembered the producer, filmmaker and Harpur College alumnus.

The end result is a feature-length documentary, Primera. The project’s director and producer, Bravo is joined by producers Catherine Gund and Kevin Lopez and editor Elisa Correa on the project.

Shot over the course of a year, Primera chronicles the birth of a nationwide movement that began with the student takeover of Santiago’s metro system and culminated in a referendum calling for a new constitution. At the heart of the story are ordinary people, and especially women, whose everyday lives bear the scars of violent police repression.

Premiering at the Tribeca Film Festival in June 2021, the film was produced in record time — only 14 months from shooting through editing — and during the height of the coronavirus pandemic. It’s now available for streaming on HBO Max and Warner Bros. DiscoveryOneFifty.

“It was an opportunity for Chile to reimagine itself. How many generations get that opportunity?” Bravo said.

A love for storytelling

Fleeing the dictatorship, Bravo’s family settled in New York City in 1981, when he was around 7 years old. Growing up, he developed a deep interest in storytelling, first prompted by books and later by documentaries on subjects such as the Vietnam War and the Civil Rights movement.

“I always appreciated the way those filmmakers interweaved content and the music of the times,” he said.

Part of the Educational Opportunity Program during his time at Binghamton University, Bravo majored in political science and Latin American and Caribbean Area Studies (LACAS). It was the first time he had the opportunity to study the history of his homeland, he said; his mentors included the late Professor of Comparative Literature María Lugones and sociology Professor Kelvin Santiago-Valles, who introduced him to concepts such as intersectionality and the dynamics of power.

He was active on campus, writing for the student newspaper and participating in the Latin American Student Union. During his senior year at Binghamton, he was already working to put together an independent hip-hop culture magazine with fellow students from Binghamton, New York University and other universities in the tri-state area. That project evolved into Stress Magazine and a then 25-year career in documenting hip-hop, youth culture and politics.

After earning a master’s degree in urban policy at the New School, he moved into education and film. In 2009, he co-produced with Loira Limbal the PBS documentary Estilo Hip Hop, on the rise of hip-hop activism in Latin America; that same year, he was hired by the late Albert Maysles to launch the Education Department at the Maysles Documentary Center. He served as Tribeca Film Institute’s vice president of education from 2011 to 2018, where he spearheaded filmmaking and social impact programs that reached more than 30,000 people in public schools and prisons across the United States.

“I began to realize that impact is critical. You can make a great piece of work, but not everyone will go to the museum or tune into PBS,” he said. “So, how do you bring your work into the communities that are directly impacted by it?”

Bravo and his team arrived in Chile the first week of November 2019 and began to document everything they saw. Upon their return to the U.S. in January, they reviewed their footage and realized that they had the makings of a film about a critical and evolving moment in Latin American history. They didn’t know then that the continuing protests would evolve into calls for a new constitution, authored by everyday people, he said.

They returned to Chile that February. Another guest was also on the way: COVID-19.

“I got on the last flight out of Chile before the U.S. closed the borders,” Bravo said.

The filming continued during the pandemic, thanks to a team of Chilean filmmakers.

Primera follows the lives of four individuals. Angie, a single mother, pastry chef and folk singer, became involved in the uprising after Camila, a fellow street musician and artist, was shot and detained by police without medical attention. Felipe, a welder, witnessed the military attack on student protestors while picking up his daughter from school; he was spurred to build barricades and shields to protect the peaceful demonstrators. Male, a human rights attorney, and her firm took on the cases of demonstrators who experienced police violence, including Camila and Felipe.

Ultimately, the movement led to a referendum on whether the country should write a new constitution; it was overwhelmingly approved, which is where the film ends. Currently, however, the path forward is uncertain; Chilean voters rejected a proposed new constitution this September and the old constitution remains in place.

Nevertheless, the Chilean experience offers some lessons for American viewers. If we want a society free from institutional racism and violence against women and girls, an inclusive society that respects diversity, we need to look at the document that creates the social order: the constitution, Bravo said.

“The Chilean people want the same things: equity, equality, rights, dignity. People want to go to the hospital and be treated in a dignified way; people want health and education to be fundamental rights for everyone,” he said. “Instead of focusing on reform and policy changes, they realized that the constitution keeps the 1% in power.”

“What if we scratched the Bill of Rights and wrote it from scratch to include the diversity of people who make up this country now?” he asked. “We hope that people can use the example of Chile and begin to focus on some of the documents that are fundamental to achieving structural change.”