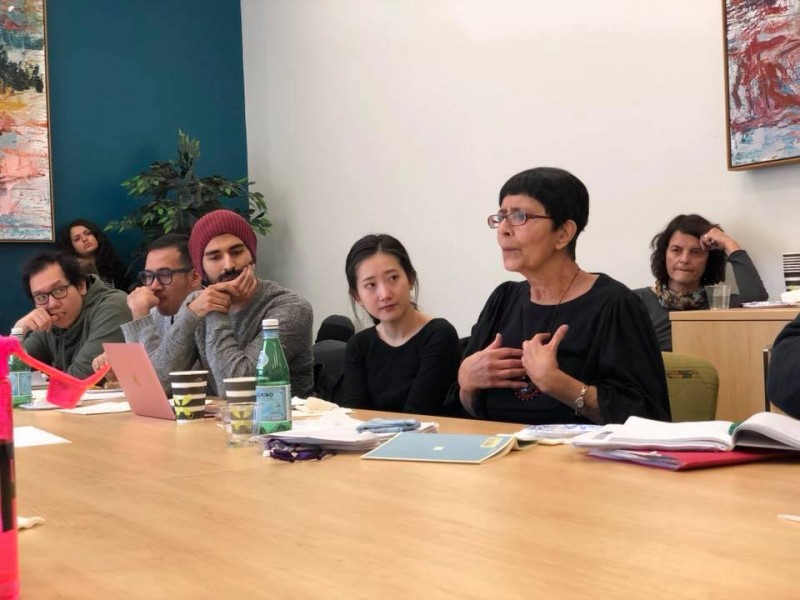 A core sentence emerged from María Lugones’ conversations, a concise statement of her choices and values: “I will not think what I will not practice.”

That philosophers think deeply and meaningfully is a given in Western culture. That they should also do — to analyze and break down the colonial hegemony that lies at the heart of that culture, to prioritize the voices of the marginalized and forge coalitions across difference — lay at the heart of her endeavors.

“She influenced generations of college students and graduate students,” said Professor and Chair of Sociology Joshua Price, who first met Lugones when he took her feminist theory class as a Carleton College senior. “But she played a much wider role in influencing the feminist movement in the United States and Latin America, as well as more recently linking ongoing efforts toward decolonization with feminism and gender formation.”

Her scholarly work touched on multiple disciplines: ethics, social political philosophy, the philosophy of race and gender, feminist theory, Latin American philosophy and politics, popular education, theories of resistance. But of all her many achievements, she is perhaps best known as a trailblazer in decolonial feminism, which links European colonialism to gender roles. Central to her political and intellectual work was building coalitions among women of color and grassroots work as a popular educator outside of the academy.

This spring, Lugones received the 2020 Frantz Fanon Lifetime Achievement Award from the Caribbean Philosophical Association and in 2016 she was named Distinguished Woman Philosopher of the Year by the Society for Women in Philosophy. 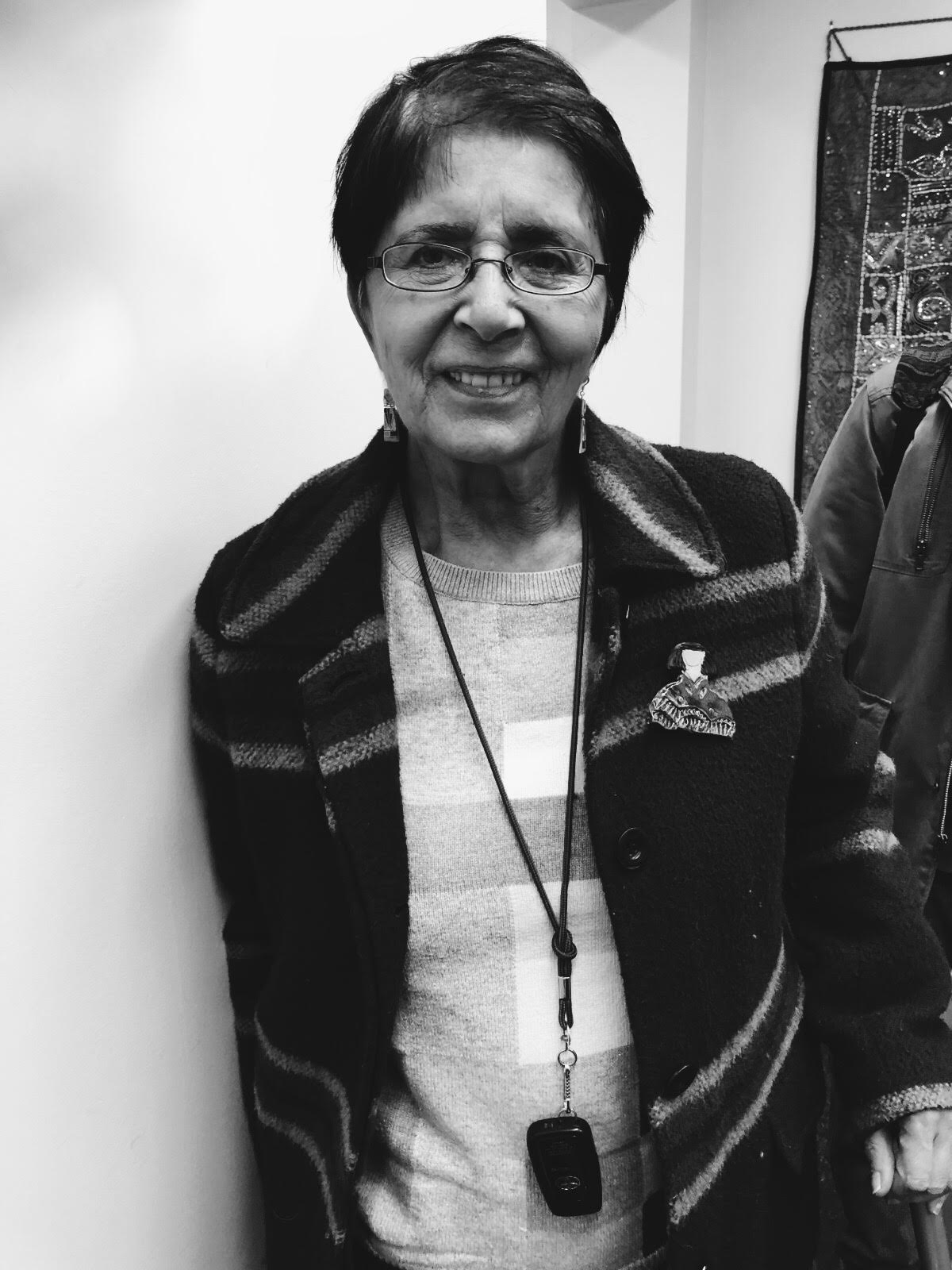 Professor of Comparative Literature María Lugones Image Credit: Provided photo.
“She was brilliant — one of the most prolific feminist and decolonial philosophers of the 20th and 21st centuries — and deeply invested in building an anti-racist, decolonial, anti-sexist, non-cisheterocentric future for multiply marginalized folks to inhabit,” said Hil Malatino, who studied with Lugones as a graduate student and is now an assistant professor in Pennsylvania State University’s Department of Women’s, Gender and Sexuality Studies.

Binghamton recruited Lugones in the early 1990s to lead the Latin American and Caribbean Area Studies (LACAS) Program. Sparked by student activism beginning in the late 1960s, LACAS began in 1973, but existed largely on paper as a loose, individualized interdisciplinary major.

Lugones built it into an intellectually vibrant community, expanding the core transdisciplinary courses and developing undergraduate and graduate certificates, said history Professor Nancy Appelbaum, the current LACAS director. Lugones also drew on her network of contacts in the U.S. and Latin America to set up a fieldwork program through which undergraduates could spend a semester with social movements or organizations in places such as East Los Angeles or Buenos Aires.

She worked with multiple programs through the years, from the now-defunct Philosophy, Interpretation and Culture (PIC) program to comparative literature, where she was listed as a professor at the time of her death. Her graduate students, too, came from a range of programs, and often chose Binghamton specifically for the opportunity to study with her.

Among them is Daimys Garcia, a fourth-year doctoral student in comparative literature. She first discovered Lugones’ seminal 2003 volume Pilgrimage/Peregrinajes: Theorizing Coalition Against Multiple Oppressions while studying for her master’s degree at City University of New York. Up to that point, Garcia had written about her identity as an immigrant as broken and fragmented; Lugones’ essays gave her a new language in which to see herself. She chose Binghamton for the opportunity to study with her.

“Meeting her, taking classes with her, working on my project with her, becoming her mentee and friend helped me see that there are radically different possibilities of being alive, being a person in the world, than what I had thought before,” she said.

Pedro DiPietro, now an assistant professor of women’s and gender studies and other disciplines at Syracuse University, first met Lugones two decades ago in the Andean Mountains, not far from the northwestern Argentinian town where DiPietro grew up. Lugones had been conducting research for a new book she was working on with Price: a translation of Argentinian philosopher Rodolfo Kusch’s Indigenous and Popular Thinking in América.

“We began an exchange that inspired me to work with her,” said DiPietro, who went on to earn a doctorate in PIC.

The decision proved transformative. Lugones helped DiPietro realize how they could connect theory and practice in relation to sexuality and gender, and how the indigenous peoples in the Americas could transform our understanding of gender and sexuality arrangements, they explained.

DiPietro teamed up with Shireen Roshanravan, a former graduate student of Lugones’ who is now an associate professor in Kansas State University’s Department of American Ethnic Studies, and Jennifer McWeeny of the Worcester Polytechnic Institute to co-edit Speaking Face to Face: The Visionary Philosophy of María Lugones, published in 2016.

“We wanted to offer a collection that could, hopefully, introduce her work to more people and facilitate the study and practice of her tremendous body of work,” Roshanravan said.

The voice in Lugones’ essays is intimate and personal, so as to form connections with other people, reflected Jeroen Gerrits, associate professor of Comparative Literature and director of Graduate Studies. The ideas they conveyed changed lives and sparked new trajectories among the next generation of scholars.

“It radically reoriented my approach to the study of philosophy and critical theory, and shifted the way I thought about the politics of intellectual labor. I knew, from the moment I met her, that I wanted her to have a strong role in shaping my scholarship, both through the PhD and well-beyond,” Malatino said.

Throughout the span of her work, Lugones explored ways to end violence in all its forms, from her 1978 dissertation on the radical potential of friendship in Aristotle to grassroots community organizing and popular education work in New Mexico, Chicago, East Los Angeles and an indigenous community in Bolivia, said Badreddine Ben Othman, a fifth-year doctoral student in comparative literature. Lugones focused on the politics of everyday practices, and the possibilities of what happens at home, in the street and in other spaces of intimacy.

“Her work was always at the radical cutting edge and has had an enormous impact in cultural studies and feminist philosophy globally, not just in the United States. I’m not sure that many of my Binghamton colleagues fully grasp just how impactful her work has been or how high her international profile is,” Appelbaum said.

Her 1987 essay “Playfulness, ‘World’-Travelling, and Loving Perception” has become a classic, along with a landmark 2007 piece on “Heterosexualism in the Colonial/modern Gender system” and “Toward a Decolonial Feminism” in 2010. 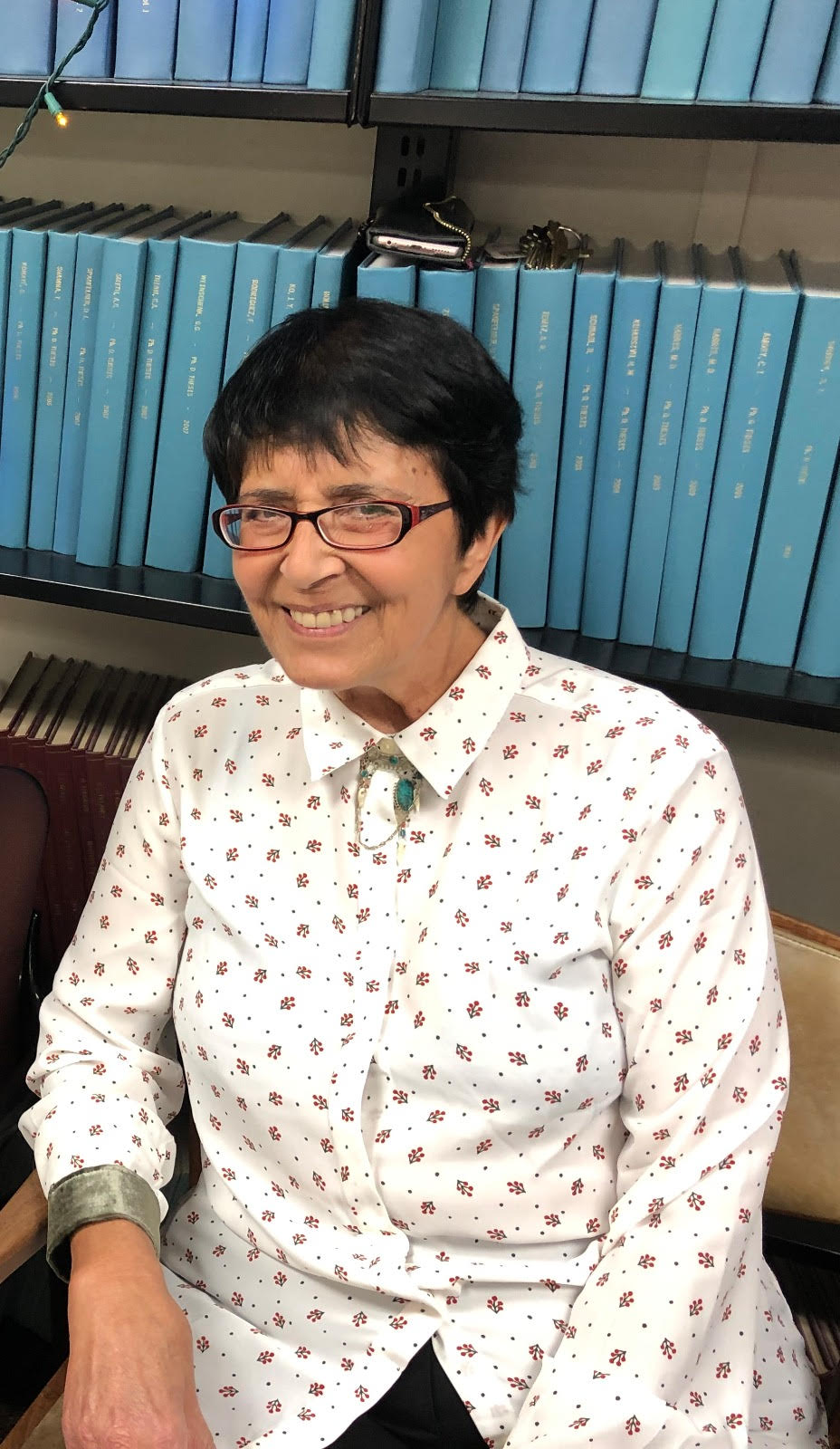 The distinctive argument in her scholarship lay in the connection between gender and sexuality with coloniality, said Walter Mignolo, the William H. Wannamaker Professor of Literature and Romance Studies at Duke University. Coined by Lugones’ Binghamton colleague, the late Peruvian sociologist Aníbal Quijano, coloniality refers to the structure of power underpinning modernity, in which a dominant group controls access to the basic areas of human existence.

Lugones respectfully critiqued Quijano’s work, and linked the formation of the gender binary, the imposition of heterosexuality and racial hierarchy in the Americas to the process of European colonization, Price said.

Her scholarly work met with a worldwide audience. A 1987 speech Lugones gave in Argentina planted the seed for the formation of an association of women philosophers in that country, DiPietro said. She has spoken at universities throughout Latin America, as well as the Conference of the Indigenous Women of the Americas.

In the United States, she was actively involved in la Escuela Popular Norteña, a New Mexico-based popular school that provided education and a platform for women of color and indigenous women, Gerrits said.

“It was vitally important to her that people come together across their differences, to understand each other deeply, as a means to learn to love and treat each other well and to form coalitions against intermeshed oppression,” Price said. “This is particularly true in her feminist work and how she tried to build connections among women, but she really embraced differences and tried to persist in building a deep coalition among all people, taking into consideration the very different places where we originate and that inform our sensibilities and tendencies.”

Former students and colleagues described Lugones as unpretentious, fierce and playful, and enormously giving of her time and resources, although she didn’t suffer fools. A talented cook, she made a point of holding potlucks for every speaker that visited the Center for Interdisciplinary Studies in Philosophy, Interpretation and Culture, which closed in 2017.

Lugones hosted the center’s weekly meetings at her Vestal home, where participants would discuss decolonial philosophy, Othman said. Conviviality — a favorite word of hers — was a key part of the experience, a practice of resistance that allowed participants to connect with one another and make space for radical coalitions.

“You have to learn each other’s ways, which you do by cooking together, or learning the tango together,” DiPietro said.

To that end, Lugones — a talented tango dancer, singer and piano player — invited her graduate students to learn the Argentine partner-dance. Price remembers her singing one of her favorite tangos, “Yo Soy Graciela Oscura,” in a voice tinged with beauty and almost an unbearable anguish. 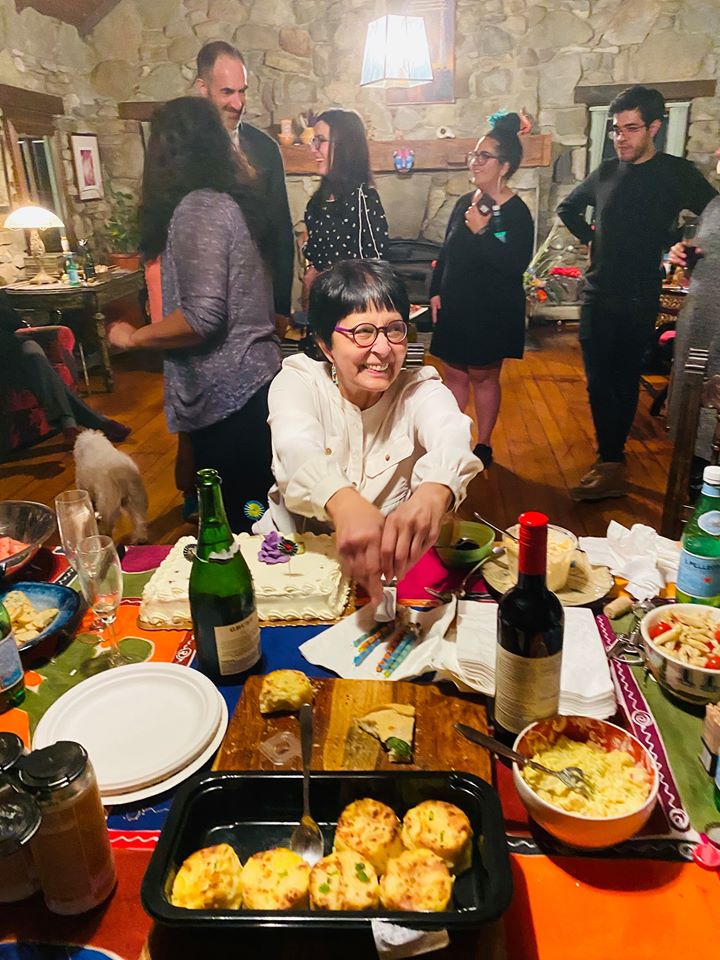 Professor María Lugones believed that conviviality was a way to cross the differences that divide us, and to that end enjoyed hosting guests at her Vestal home to discuss philosophy and dance the tango. Image Credit: Provided photo.
As with almost everything she did, she engaged the practice of dancing tango in ways that inspired more creative and just ways of relating to each other on and off the dance floor, Roshanravan said.

It’s a topic that Lugones explores in her essay, “Milongueando Macha Homoerotics,” published in the book Performing the US Latina and Latino Borderlands. In practice, it involved reinventing the language of tango, creating an alternative to the patriarchal structure of male lead and female follower that allowed for more queer intimacies, DiPietro said.

“Instead of a lead, we had the initiator and ‘the coquettish respondent,’” they said. “That’s how we taught each other.”

She deliberately made a home for those who felt on the margins of academia, and deeply listened when others spoke. It didn’t matter if the topic was a scholarly article, a dissertation idea or a personal issue; she would listen, close her eyes and think, and then pull the speaker’s thoughts together into a coherent whole, revealing something new, Garcia remembered.

“Her joy and passion was in forging community and inspiring collective change for the better, no matter where she was. I remember struggling in my first year at Binghamton, feeling lonely and pondering a move to another institution, and she said something I’ve taken with me ever since: You never find community, you do the work to build it,” said Roshanravan.

As a philosopher and scholar, Lugones had an uncompromising commitment to life, not just working for a university appointment or the next publication. And she lived her work up to the last minute, sharing her decolonial feminism powerfully with her listeners, Mignolo said.

From June 23 to July 8, she participated in the annual meeting of the Middelburg Decolonial Summer School at the University of Utrecht, delivering three “splendid” online lectures to 40 students, Mignolo said. Knowing that these could be her last lectures, she gave them her all. Two days after the course ended, she was hospitalized in Syracuse, passing a few days later.

While Lugones is no longer with us physically, her presence lives on in her scholarly publications, the videos of her talks and presentations and the hundreds of scholars around the globe who have taken up her work, Garcia said.

“Nothing will be like meeting her, having her here with us. But if you want to get to know her a bit, she left a lot of herself with the world,” she said.