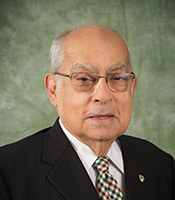 Charles Aswad is a graduate of the State University of New York at Binghamton and New York Medical College. He is a charter fellow of both the American Academy of Family Physicians and the American College of Emergency Physicians.

Aswad has been a consultant and advisor in both medical and dental fields, as well as to major corporations. He developed the smoking cessation program for MSSNY which included training programs for physicians and patients. He was consultant to major pharmaceutical companies in the areas of: clinical trials; communication to professions in the areas of AIDS, Hepatitis C, influenza, diabetes, cancer, childhood and adult obesity; physician involvement in anti-terrorism efforts; and developed a program for treatment of biological warfare agents, post 9/11. He collaborated with multiple health agencies in state and federal government, as well as NGOs, including the American Heart Association, the American Cancer Society, the American Lung Association and others in developing communication programs.

Aswad served as chairman of the editorial board of a major continuing medical education and communication company. He has personally worked with both the heads of the FDA and the U.S. Surgeon General's Office and their predecessors.

Aswad served as medical director of the New York State Professional Standards Review Organization. He has provided nominations to the U.S. Pharmacopeia. He is a charter founder and director of the Medical Liability Mutual Insurance Company, the largest physician owned company in the U.S. Aswad was chairman of the New York State Continuing Medical Education affiliate of the American Council on CME, which certified most CME programs in New York state. As CEO of the MSSNY, Aswad supervised all its communication efforts, including its "News of NY" newspaper, as well as all fax and email communications and educational programs.

Aswad is the recipient of numerous honors including distinguished alumnus honors from both Binghamton University and New York Medical College.