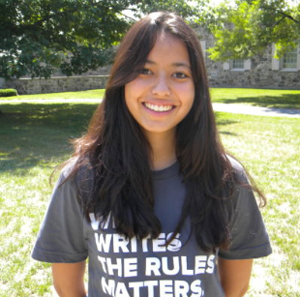 Brianna Cea is a third-year senior at Binghamton University who takes her role as an active citizen seriously.

Her double majors in political science and philosophy, politics and law are just one testament to that dedication. Her leadership roles in the Roosevelt Institute — as cofounder and president of the Binghamton chapter and regional coordinator for New York state and New Jersey — are others. She hasn't always been quite so active in the political realm, though. In fact, it was an early commitment to community service that eventually morphed into what now amounts to an impressive spread of political advocacy and policy research and development work during her college career.

"When I was younger I was a lot more interested in volunteer work," Cea explains. "I worked a lot with veterans. I guess my commitment to service comes from working with those who have served my country. I came to the realization that I can serve my country in other ways. And in my case, it was through political engagement and politics."

Cea says this realization came to her during her freshman year at Binghamton. "I noticed that a lot of us complain about things that happen, whether it be in our community or on a national level, but if we just sit around and complain all day, nothing is going to change." And so she got busy.

"When I heard about the Roosevelt Institute at another school, I was really interested in starting a chapter here," she says. The Roosevelt Institute is a national network of 130 campuses in 40 states that works to empower students to get involved in the political process through policy writing, policy research and policy advocacy work. Cea cofounded the Binghamton chapter as a freshman in 2015. And now, just two years later, they have been awarded the title of best chapter in the country, thanks to the successful initiatives Cea and her team have implemented over the past two years, which she says "push the envelope" on student involvement Broome county politics.

"I got involved with the Roosevelt Institute," says Cea, "because I was amazed by the opportunities students can create through the political process by educating ourselves, by working with the community and by implementing innovative and creative solutions on the local level." In order to figure out where to start, Cea and her team organized a survey of 635 Binghamton University students, measuring students' awareness of local government and local issues and also determining what issues are the most important to young people in Broome county.

"We learned that 76 percent of students feel like they have no weight in local politics," says Cea. "Only six percent of students knew what a county executive was or who [Broome county's] was. The number one issue that students identified as important was poverty, [followed by] economic development, safety, education and civic engagement. So we took that survey and we created a policy agenda out of it."

They called this agenda the Binghamton Blueprint. "Ever since then we've been working with local community organizations, departments and student organizations to advocate for different policy issues and initiatives from the Binghamton Blueprint. One of those was the student board of advisors in local government, which was officially announced by the county executive [Jason Garner] last semester, so we're working on getting that off the ground."

The student board of advisors will be composed of around twenty students from Binghamton University, SUNY Broome and high schools from around the county. This will be the first youth delegation in Broome county government, according to Cea, as well as the first time college and high school student leaders will work together to identify areas of synergy and create collective solutions for the youth of Broome county. Students will spend time learning about how county government works and will then work with department heads and others in government to create an annual report of issues that are important to youth in the area, which they will present to the county executive and the county legislature.

While the Roosevelt Institute and related projects such as the student board of advisors are Cea's biggest priority in terms of her campus involvement, she ultimately wants to spread this kind of work to a much wider network. Generation Vote is a new student startup she is currently working on with that exact goal. 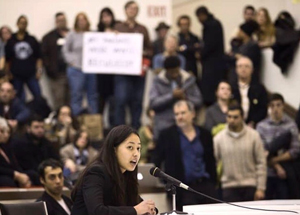 "We want to transform the way young people are engaged in local electoral politics," she explains. "And to do that, we want to educate students on how to be effective community organizers, how to do survey development — similar to what we did with Binghamton Blueprint — how to do platform research and how to be effective campaigners for a local campaign or an advocacy campaign. So right now we're working on creating our curriculum and programs to train students in different Generation Vote teams across the state. Moving forward, we want to connect our teams and basically create a youth movement in New York state that empowers students to get involved in the local political process, whether it be through voting, campaigning or even policy research."

Cea's message to her peers here at Binghamton University and the students she reaches through her work with the Roosevelt Institute and Generation Vote is simple, but powerful: