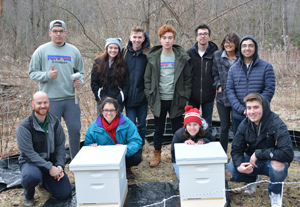 Eden Nebel is a senior philosophy, politics and law major and is the vice president of the Binghamton University Bee Club, a new student-run organization on campus. The club raises awareness about the rapidly declining bee population, educating Binghamton students on the importance of bees and the role they play in maintaining sustainable ecosystems.

According to a 2016 global assessment on pollinators produced by the Intergovernmental Science-Policy Platform on Biodiversity and Ecosystem Services (IPBES), 75% of the world's food crops and nearly 90% of wild flowering plants depend on pollination. IPBES cites numerous factors affecting pollinator populations, including "changes in land use, intensive agricultural practices and pesticide use, alien invasive species, diseases and pests, and climate change." Based on regional and national assessments, it's estimated that over 40% of invertebrate pollinators are facing extinction.

The Bee Club was originally formed last semester by Nebel and a group of friends, one of whom was taking a class that discussed the importance of bees. After talking amongst themselves about how bees are dying at an alarming rate and acknowledging that other universities have bee clubs and bee farms, they agreed there should be one at Binghamton as well.

Last semester, Nebel and fellow executive board members successfully got the club provisionally chartered by the Student Association. Until they are able to apply for a full charter next spring, they have been working to increase membership, fulfill their goals and make plans for the future. They have been holding general body meetings twice a month in which they discuss bee-related news and have tabled around campus to spread their message. 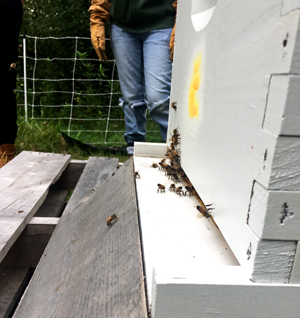 The Bee Club has already gained the attention of not only students, but that of professors and community organizations as well. They have around fifty students subscribed to their mailing list, are in communication with the Southern Tier Beekeepers Association and have been helping Visiting Assistant Professor George Meindl of the Environmental Studies Program maintain a small bee farm located at Nuthatch Hollow in the campus Nature Preserve. According to Nebel, Meindl, who is studying the bees, has wanted to have a place to house bees on campus for a while and with the club's support it became possible last May.

The bee farm is currently made up of two boxes that house the bees, and the club is hoping to expand it soon, but that will have to wait until spring. "At this point in the semester," says Nebel, "we're not going to go to the bees anymore because we had to winterize them." He explains this process as providing the bees with sugar water for sustenance, since they cannot leave the hive in the winter due to a lack of flowers that inhibits their ability to fly and pollinate. Winterizing the bees prevents them from dying during the cold months of the year.

Nebel says building the bee farm and maintaining it has been one of the most exciting parts of this club for him, although it is only a small part of what they do. Since they can no longer help with the bees due to the cold, e-board members are focusing on planning their general body meetings and working on expanding their efforts to raise awareness for the bees. At meetings, Nebel and his fellow e-board members plan to watch and discuss bee documentaries as well as discuss articles related to this topic.

The club has also been brainstorming ways they can fundraise to help the bees until they obtain a full charter from the Student Association which would allow them to do so. Along with increasing student membership, e-board members are also hoping to collaborate with other clubs and work with more professors. In the meantime, they plan to focus on their primary objective of educating students regarding the importance of these natural pollinators and why we should be concerned with saving them.

Email the Binghamton University Bee Club to join their listserv and receive information about upcoming events.

Follow the club on Instagram @binglovesbees to stay up-to-date on their general body meetings, events and their bees!