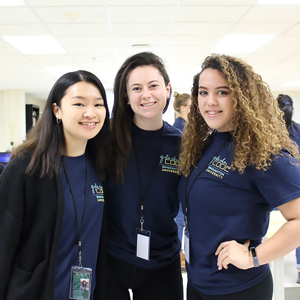 Growing up, Fiona Liang always wanted to be a lawyer. That changed abruptly when she joined a Girls Who Code Summer Immersion Program the summer before her senior year in high school. "It changed my path completely, says Liang. "I wouldn't be here in my academic and professional career if it wasn't for a program like this."

This early experience with Girls Who Code (GWC) inspired Liang, who is currently a senior in the 4+1 BS/MS Systems Science and Industrial Engineering program, to start a GWC chapter at Binghamton University. She started by searching out support among her female peers, a core principle of GWC, a national nonprofit organization that aims to increase the number of women in computer science.

She found support in classmates Caitlin Hall and Kasey Hill. Hall, a fellow senior in the accelerated BS/MS program, had a similar experience in high school, and was excited about the opportunity to bring GWC to girls in Broome County. "My high school offered a one-day intro to coding course where I found myself wanting to learn more and get into engineering," she says. "While I did not end up pursuing coding specifically, that small experience stemmed my passion for engineering."

Hill, who is now finishing her final year of the accelerated BS/MBA Systems Science and Industrial Engineering program, was interested in math and science from childhood, but around middle school found herself backing away from technological clubs and opportunities because she was so often the only girl in the room. "I would walk into a classroom and nobody would look like me," she says. "13-year-old me would think, 'Was I really meant to be here?' and it wouldn't be long before I left. As a child, as a high schooler, even now, it is important to have a support network of those that encourage you to pursue your passions. GWC provides girls with the resources and nurturing environment that tell them, "You belong."

With support from other students shored up, Liang and her co-founders sought out support from the Center for Civic Engagement's (CCE) Youth Initiative program, which provides students with opportunities to intern and volunteer in local schools. They met with CCE staff to discuss their ideas and find out how to reach out to local school districts who might be interested in participating in GWC. The CCE connected them with several districts, including Binghamton, Johnson City, Vestal, Chenango Valley and Maine-Endwell. 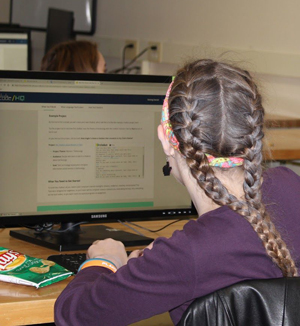 The GWC club meets on campus for two hours every Saturday for eight weeks. The 17 girls currently participating in the club range from freshmen to juniors in high school. The class begins with an icebreaker and a spotlight on a present-day female role model who incorporates technology and programming in their line of work. This semester also includes a crash course on Python basics and HTML/CSS so that students can become familiar with both the frontend and backend development of programming.

They have only had one class so far but are already seeing promising results. The girls are excited and interested in what they're learning. In addition, they are starting to bond with each other and getting to know other female students from the area with similar interests.

STEM is unquestionable a male-dominated field. According to a February 2018 Brookings Institution report, despite earning more four-year undergraduate degrees than men as a whole, women only account for 35 percent of STEM bachelor degrees earned. And post-graduation, they account for only 22 percent of the STEM workforce.

Hall experienced this lack of female representation in engineering throughout her college career. Often she found that while working in groups she had to prove herself before her ideas were taken seriously, and she had to put in more work and research to back up her ideas in order to gain recognition from her peers. Although facing these issues on a daily basis was difficult, Hall says, "I have grown and learned a lot through these experiences, and I hope to teach young girls that even when they are doubted, to not give up and be confident in themselves and their abilities."

"Having a support system, learning to embrace your capabilities and being confident in your work is essential to tackling this barrier," adds Liang.

Hall, Liang and Hill are optimistic that by enrolling in this program, the girls will take away a sense of pride in their work and a passion for technology that will inspire them to dream big. "Girls need STEM and STEM needs girls," says Hill. "It is our hope that these young women finish the program with a newfound passion for creating, innovating and being fascinated with the technological world around them."