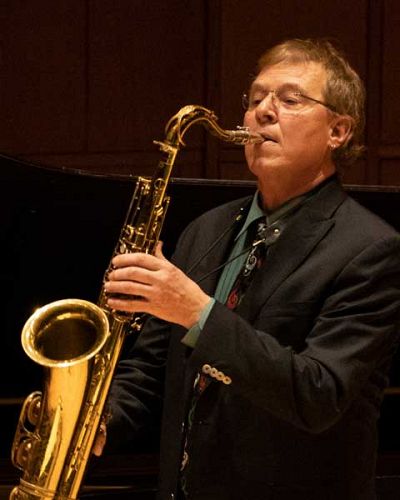 Michael Carbone, a native of Utica, New York moved to the Binghamton area in 1981 and joined the Binghamton University music faculty in 1997 and continues to serve as the Director of the Jazz Studies Program and the Director of the Harpur Jazz Ensemble. He holds a Bachelor of Music Education from the Crane School of Music and a Masters in Music Performance from Binghamton University having studied saxophone with Dr. James Stoltie, J.R. Montrose, Al Gallodoro and April Lucas.

Mike was also an instrumental music teacher in the Johnson City School district where he was also Coordinator of Music for the JC School District during the latter years of his public-school career. Along with his administrative duties, and instrumental lesson teaching, he also taught high school concert band and jazz ensembles, until retiring from the Johnson City School District at the end of June 2015.

Mike has also served as guest conductor for Broome, Seneca, Ulster, and Tompkins County Music Educators Festivals, and as Saxophone/Jazz Improvisation Instructor for New York State School of Music for the Arts at Binghamton University. Mike was also the last Secretary Officer for the New York State Chapter of the International Association for Jazz Education (IAJE) and has frequently been hired as a jazz adjudicator/clinician for high school jazz festivals.

Along with filling in as a sideman for many New York state-based groups, Mike can be found frequently performing in the Binghamton based commercial music group Splash. He is also very active performing with his jazz quartet Miles Ahead, which hosts an educational jazz jam the first and third Wednesdays of every month at the Lost Dog Café in Binghamton. Serving as a board member for the Goodwill Theatre and The Schorr Family Firehouse Stage, Mike also organizes and hosts the jazz events held at the Firehouse Stage including the enJOY Jazz Series. Along with those activities, Carbone is an endorser for the Andres Eastman 52nd Street ESS 652 Soprano Saxophone and has also been the music coordinator for the Binghamton July Fest “Jazz and Music Festival” for the past eight years.