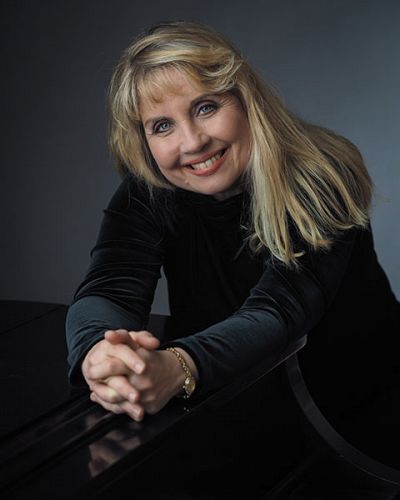 Pej Reitz, pianist, is a native of the Binghamton Area. She received her Bachelor and Master of Music degrees in piano performance with accompanying emphasis. She attended Boston University, New England Conservatory and Binghamton University. She has studied piano with Jean Casadesus, Victor Rosenbaum, Seymour Fink and Walter Ponce and ccompanying with Allen Rogers. She has accompanied throughout the United States, in England, South America, Spain and at the American Institute of Musical Studies in Graz, Austria. She was a winner of the Artistic Ambassadors Program by the United States Information Agency in partnership with the John F. Kennedy Center for the performing arts.

She was an official accompanist for the MTNA State and Eastern Division Competition held at Ithaca College. She has been a guest chamber music artist in Morges, Switzerland. She also was selected to attend the Accompanying Workshop for Singers and Pianists held at Northwestern University with Chicago Lyric Opera Faculty and Coaches. She was recently invited to the International Clarinet Conference to play a recital in Tokyo, Japan. She was a guest artist on the Cornell Summer Series. She was an official pianist at the International Double Reed Competition and Convention in at Ithaca College and was invited to play the Convention in Birmingham, England with the Glickman Ensemble. She was selected to accompanying at the Interpretation of Spanish Music in conjunction with University of Madrid in Grenada, Spain coached by Teresa Berganza and at Mannes School of Music. She has been a Guest Artist in Granada, Spain and accompanied the Barcelona Song Festival. She was the pianist for the Glickman/Poplin Festival in North Carolina. She was a guest artist performing at the International Gilbert and Sullivan festival in Harrogate, England. She performed at the National Opera Center in NYC. She has been selected to perform at the Newport Music Festival for two seasons. She was a guest artist in Madrid, Spain. She was a guest artist on the OSFL series in Elmira, NY Spring 2019 at the Rockwell Museum. She was a guest artist on the Union College Series Sept 2018 and performed in June 2019 with harpist Coline-Marie Orliac from France. She will be on the Temple Concord Series performing with Ivy Waltz, Mezzo and Zachary Sweet, cellist this coming season. She will be a Collaborative Pianist for the Brass Symposium at Ithaca College in 2020. She will perform with Flutist, Jeanne Sperber on the Horned Dorset Series near Cooperstown. She will be a Guest artist on the Trinity Church Series with clarinetist, Timothy Perry. She is currently on the faculty at Binghamton University and Ithaca College School of Music and SUNY Broome. She is a member of the New York District MTNA organization. She is the Treasurer of the local District VII Music Teachers Association and is an active adjudicator for the National Piano Guild Organization.