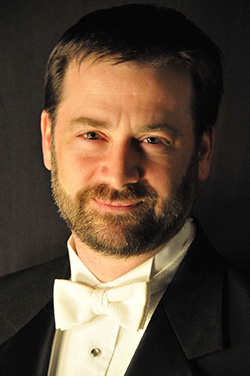 William Culverhouse is currently Director of Choral Activities and Assistant Professor of Music at Binghamton University, where he directs the Harpur Chorale, Treble Chorus, Chamber Singers, and University Chorus, and teaches courses in choral music and vocal pedagogy. He received his undergraduate degree in music education from Oberlin Conservatory, where he studied with Catherine Jarjisian and Herbert Henke, and graduate degrees in choral conducting from the University of Maryland, College Park, where he studied with Edward Maclary. Before coming to Binghamton, he served as Director of Choral Activities at Earlham College in Richmond, Indiana, where he directed the Concert Choir and Madrigal Singers and taught courses in musicology, conducting, composition, music education, and musicianship. Prior to teaching at Earlham, he taught music in the public schools in Ohio, Illinois, and Virginia, and served for eight years as Director of the Schola Cantorum at the Cathedral of Saint Matthew the Apostle in Washington, D.C.

Dr. Culverhouse also serves as Artistic Director for the Southern Tier Singers’ Collective, a professional-level chamber choir which he founded in 2018 and which draws from the most talented singers in central New York and northeast Pennsylvania, including many regional choral music educators. Their repertoire ranges from Gregorian chant and Renaissance polyphony through Bach, Brahms, and Poulenc to living composers such as Morten Lauridsen and Dale Trumbore.

A lyric baritone with a specialization in early and contemporary music, Dr. Culverhouse has sung professionally throughout the Midwest and the East Coast. He has studied singing with David Clayton, Fay Putnam, Joan Heller, Paul Warner, and Gerald Crawford. He is an active composer as well, particularly of choral and solo vocal music, with performances also throughout the Midwest and East Coast. His composition teachers have included Adolphus Hailstork, Robert Sirota, and Kathryn Alexander. His Requiem for chorus and harp received its New York premiere in March 2016.

Dr. Culverhouse is in frequent demand as a choral clinician, having conducted, adjudicated, and presented workshops in Illinois, Indiana, Maryland, Nevada, New York, and Virginia. He also specializes in choral music of the Arab world, and has given conference presentations on Arab choral music in New York and Virginia. He traveled to Jordan on a Fulbright grant to conduct a program of Handel and Vivaldi in May 2016. In February 2017, he returned to Jordan to conduct an honors choir of students from Kuwait, Oman, Pakistan, India, Nepal, Bangladesh, and Malaysia as well as from Jordan. In summer 2018, he co-directed a performing-arts research-abroad program in Spain and Morocco.