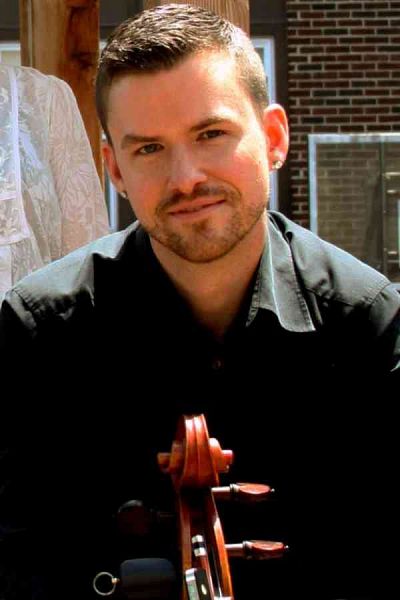 Zachary Sweet is currently cello instructor at Binghamton, Mansfield and Colgate Universities, on faculty at Ithaca Talent Education and Music Together of Ithaca, and artistic director of Ithaca Free Concerts in Ithaca, NY.

As a performer, Zachary has performed extensively throughout the Tri-State area. He has had the honor of performing with artists such as Sharon Sweet, J.J. Penna, Phyllis Lehrer, Siu Yan Luk, Anthony Pattin, Liz Shuhan, Susan Waterbury, Kirstin Marshall, and the late Erik Friedman.

Currently, Zachary is principal of Colgate University Orchestra and plays regularly with the Orchestra of the Southern Finger Lakes, the Binghamton Philharmonic, and Tri-Cities Opera. From 2001-2003, Zachary held the Talented Students in the Arts Initiative Fellowship at the Aspen Music Festival, where he acted as mentor to the Concert and Symphonic orchestras while playing with the Festival Orchestra under the batons of David Zinman and James Conlon.

Zachary completed his Master's in Performance and Literature at the Eastman School of Music in 2006. During his studies there, he became a member of the Eastman Chamber Society, was Principal of Eastman Philharmonia, Eastman Chamber Orchestra, and Eastman Opera Orchestra, and studied chamber music with the Ying Quartet, Elinore Freer, Dr. Jean Barr, Richard Kilmer, and Dr. Kenneth Grant; his principal instructors have been Alan Harris, Kathy Kemp and Carol Vizzini.

As an educator, Zachary has spent the past seven years exploring music development in young children. In 2009, he completed a long-term training program in Talent Education at the School for Strings in Manhattan under the tutelage of Master Teacher Pamela Devenport. Zachary has also completed training with Sally Gross, Carey Beth Hockett, Carey Cheney, and Rick Mooney. He was awarded the Certificate of Achievement by the Suzuki Association of the Americas in January, 2015. Recently, Zachary joined the Faculty of Ithaca College Suzuki Institute, the Intermountain Suzuki Strings Institute, and Point Counter Point Chamber Music Camp.

In addition, Zachary is in demand as a Music Together Instructor, leading classes for Mixed Ages, Babies, Big Kids and Pre-Schools. In November, 2014, Zachary was awarded Music Together Certification Level II status, having demonstrated outstanding achievement in teaching, musicianship, program philosophy, and parent education. The award was granted by the Center for Music and Young Children in Princeton, NJ, Kenneth K. Guilmartin, Found/Director.