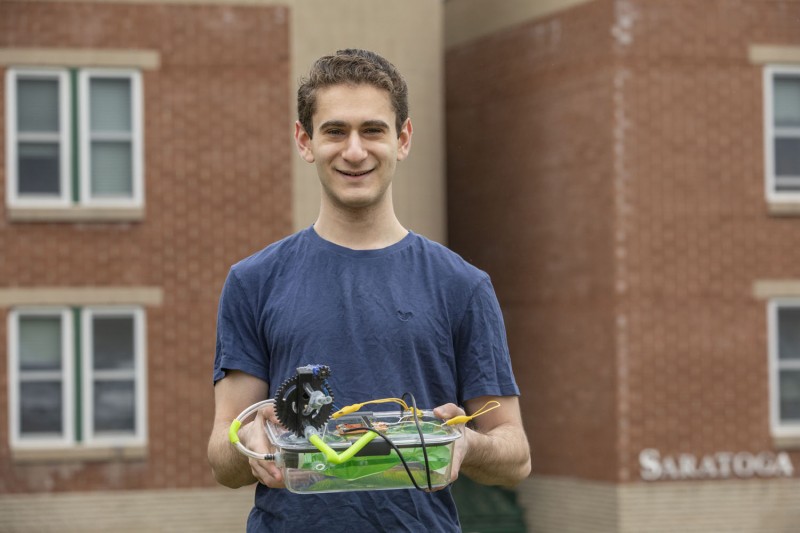 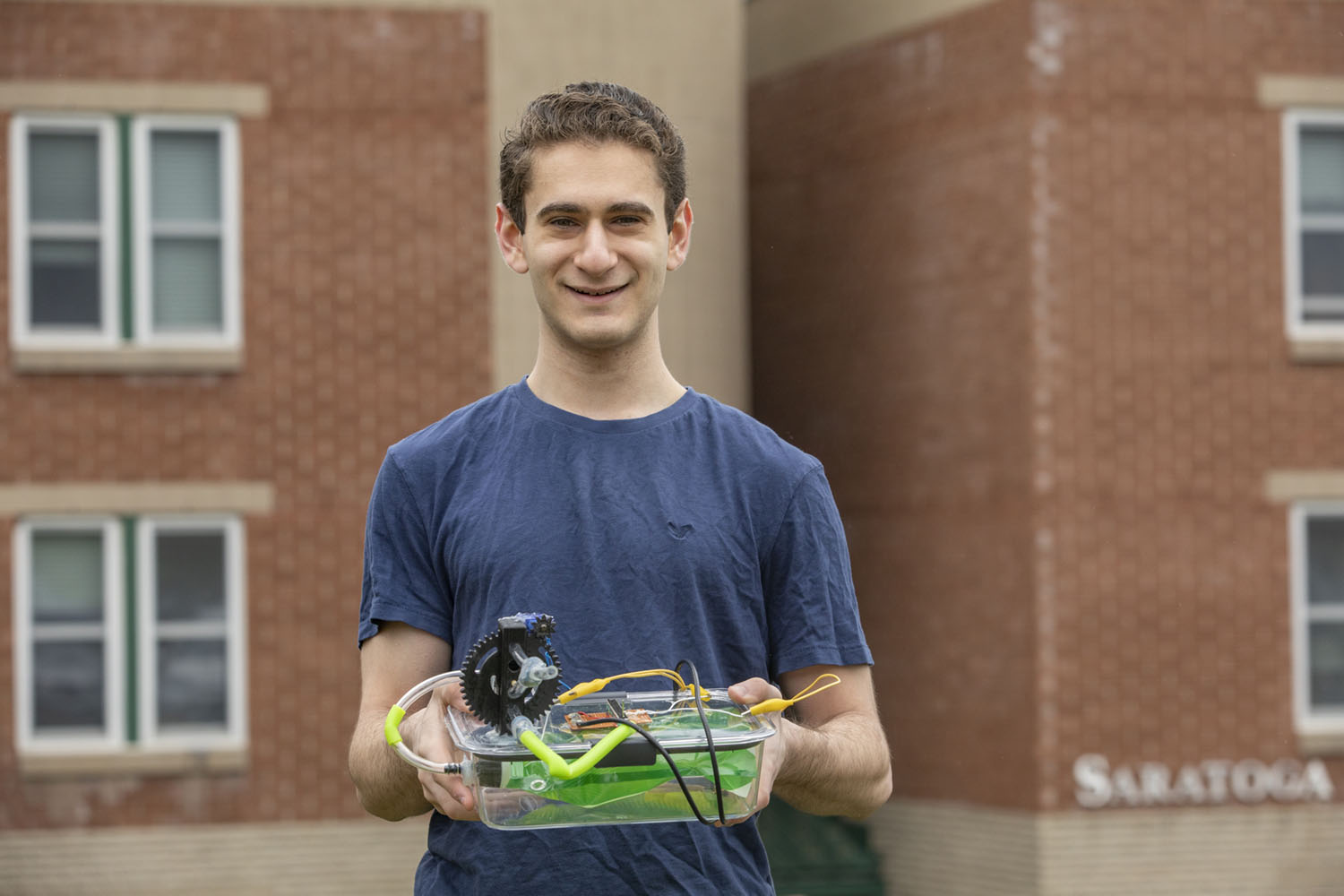 Jacob Goodman, a junior studying mechanical engineering at Thomas J. Watson School of Engineering and Applied Science, made a ventilator at his Saratoga residence in the Hillside Community mainly using items he bought at Walmart. Image Credit: Jonathan Cohen.
By Chris Kocher

Over the years, the Binghamton University student has assembled potato guns, rail guns, a carbon dioxide laser and “every type of rocket you can probably imagine.” He’s modified Nerf Guns to make them more powerful and improved the performance of every remote-control car and helicopter he’s ever had.

So when a professor concerned about the spreading COVID-19 pandemic challenged him on a recent Friday (March 27) to build a working ventilator over the weekend, Goodman knew he could make it happen. By Monday (March 30), he did indeed have a prototype, which he put together in his residence hall room, mainly from repurposed parts he bought at Walmart.

Goodman — a junior from New Rochelle studying mechanical engineering at the Thomas J. Watson School of Engineering and Applied Science — found some inspiration from an Oxford University and King’s College London project called OxVent, which uses a simple bladder inside of an airtight box to pump air into a patient’s lungs.

“I probably spent more time walking around at Walmart trying to find supplies,” he said. “A lot of this stuff is repurposed. The box is a lunchbox — it’s not perfectly airtight but it does the job. The ‘bag’ inside is a collapsing water bottle meant for camping. The connector that would go to the lungs is a silicone straw.”

The ingenious part of the design, however, is a gear system that modulates the patient’s breathing pattern. Goodman designed and printed it using his own 3D printer. The ventilator also includes some electrical odds and ends he had lying around, and he owns an air compressor that he used to test it along the way.

“I think the best way to learn is to build something,” he said. “I’ve taken that to heart. In high school, instead of sitting there and doing my homework, I would go and build things.”

Goodman is one of Binghamton’s Innovation Scholars, a three-year interdisciplinary program of academics, experiential learning, networking and mentorship started in 2018 by School of Management Dean Upinder Dhillon and Vice Provost for Online and Innovative Education James Pitarresi. Each year, it brings together at least 25 sophomores from across campus to introduce concepts of design thinking, human-centered design and “disruptive” idea generation that can drive economic development while also improving our everyday lives.

“We give them a toolset for creative thinking to solve wicked-hard problems,” Pitarresi said.

He meets with the scholars once a week, but like all other classes at Binghamton, those seminars have moved online via Zoom.

“When we met virtually, we talked about how complicated ventilators are now, but it seems to me that 50 or 60 years ago they weren’t that complicated,” he said. “We should probably be able to build one and then get some local companies to help us manufacture some. I like putting bold ideas out there.

“Jacob said, ‘I think I could build one of these over the weekend in my room,’ And I said, ‘OK, I’m calling you out on this. I’m calling your bluff. There’s no way you can do this.”

Goodman’s determination should not be underestimated, though.

“There are certain projects that I had to get done,” he said, “no matter what was in my way, whether it was school or time or money — I’d find a way to finish it.”

When a high school science class spent just one day on lasers, Goodman decided to build one of his own at home. An accident that required microsurgery on one of his fingers barely slowed him down.

“My friends make fun of me because I read textbooks for fun!” he said with a laugh. “The internet has been the greatest library. Obviously, there are things wrong online — but whatever I learned was probably right, because my projects did work out.”

Assistant Professor Scott Schiffres and PhD candidate/lecturer Arad Azizi from Watson’s Department of Mechanical Engineering praised the project’s originality and suggested it might be worthy of a patent. Goodman is postponing pursuit of a patent for now, however, as he is eager to make his ideas available online as COVID-19 continues to spread and ventilator shortages persist.

“I’ll put it out online and get as much feedback as I can,” Goodman said. “I want to make this work and save some lives. If I lose my chance to patent it now, I’ve come up with a lot of good ideas — this isn’t the first one, and it sure won’t be the last.”

He doesn’t have a specific timeline for getting his ventilator design online, but he realizes that the clock is ticking as COVID-19 continues to spread. He will have time during Binghamton’s spring break, because even though the coronavirus “containment zone” around New Rochelle has been lifted, the entire state is now in lockdown and he plans to stay on campus.

“Within the next week, I should have a much more refined prototype, and hopefully after that we’ll be able to collaborate with industry experts and doctors to turn it into a market-worthy product,” he said.

Pitarresi — who called Goodman “one of our most impressive students, just a real go-getter” — sees a huge potential to help not just people across the U.S. but also in poorer countries around the world, where something built with off-the-shelf parts could save lives.

“This is getting back to American ingenuity — the spirit of ‘let’s figure out how to do this,’” he said.