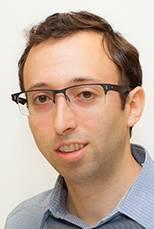 At Binghamton University, Scott’s research is at the intersection of heat transfer, energy and additive manufacturing. Scott has received support from the NSF, SRC, NYSERDA and IEEC. Scott is a 2019 NSF CAREER Recipient in the Thermal Transport Processes program.

Prior to joining the faculty at Binghamton University in January 2016, Scott was a postdoctoral associate at Massachusetts Institute of Technology, where he worked on energy-efficient adsorption refrigeration with Prof. Evelyn Wang, and heat transfer applications of nanomaterials and additive manufacturing with Prof. Anastasios John Hart.

In 2014, Scott received his PhD in mechanical engineering from Carnegie Mellon University, working in the area of experimental nanoscale heat transfer with Prof. Jonathan A. Malen. In 2010, Scott was awarded a Steinbrenner Institute Research Fellowship.

Scott spent the summer of 2012 as a visiting researcher at Profs. Junichiro Shiomi and Shigeo Maruyama's laboratory at the University of Tokyo through a joint U.S.-Japan East Asia Pacific Summer Institute Fellowship.

Before returning to academia in the fall of 2009, he worked as a flight and controls engineer at Boeing's Satellite Development Center in Los Angeles.