Life as an extra on The Marvelous Mrs. Maisel

One day in late April, I was walking past The Forum on Washington Street in Binghamton, when I quickly took notice of the marquee.

The Marvelous Mrs. Maisel has a casting call in Binghamton? Like, the Amazon show that just won the Golden Globe for best television comedy? The series, which follows a young, Jewish, aspiring comedienne from 1950s Manhattan, easily became one of my favorite shows of 2017. Naturally, I had to investigate this opportunity further.

On April 28, I showed up with some friends who, like me, have remained in Binghamton since graduating, and auditioned to become a background actor on the show, which was filming part of its second season here in Broome County. The process was simple and easy. We filled out some paperwork and they took a few pictures of us.

More than a month went by and I sort of forgot I auditioned, when one day in early June, I got an email asking me to attend my costume fitting at Binghamton University! The fitting took place at Hunter Hall in Mountainview College, although you wouldn’t have believed me if I showed you pictures.

They transformed the entire residence hall into a well-oiled, high-functioning costume shop. The hall’s large, impressive corridors were suddenly a mere four feet wide with racks of clothing layering every wall. Bedrooms were changing areas, common rooms were picture studios and the study lounges were equipped to custom-tailor an entire wedding.

Costume designers cut my hair and put me in a bunch of outfits until I looked like a true gentleman of the 1950s. By this point, I was filled with excitement at the prospect of my inevitable, meteoric rise to stardom. What awaited me, however, was not glitz and glamour, but a fascinating behind-the-scenes look at television production, as well as a humble love letter to the beauty that our upstate community has to offer the rest of the world. 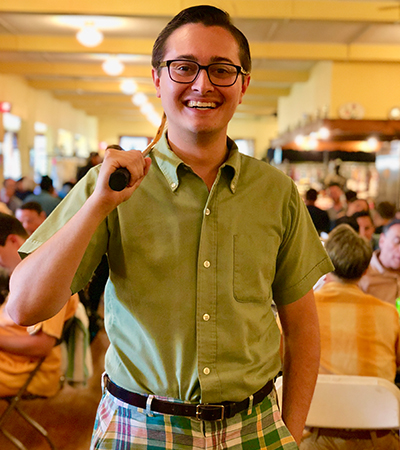 All filming was done in Deposit, N.Y., about 30 minutes east of Binghamton on the edge of Broome County. The show transformed a charming resort on the shores of Oquaga Lake into a tasteful 1950s Catskills retreat that families would frequent to escape the hustle and bustle of New York City.

Much of my day was spent in “holding,” a massive basement with no cell reception that alternated between feeling like summer camp with your new best friends and a dreary prison cafeteria with no escape in sight.

Waiting was the name of the game, even once you finally got called to the set. It didn’t take long, however, to find an overwhelming appreciation for the entire experience. Being in a scene means getting your blocking (the details of your moves in relation to the camera) from an assistant director and then performing the action in at least 15 takes. This could mean walking from point A to B 15 times, or it could mean having a pantomime conversation in the background 15 times as you smoke 15 herbal cigarettes.

There can be a good amount of waiting between takes, of course, but this is when you can learn the most. Once the director yells “cut,” at least 30 crew members flood the entire set bringing everything and everyone back to first positions, readjusting actors and making sure everything is consistently to Golden Globe-winning standards.

This was also when I heard what the principal actors and crew had been doing during their weeks-long stay in Binghamton. I consistently heard rave reviews of our town, our community and the beautiful scenery that brought The Marvelous Mrs. Maisel to Broome County in the first place. I won’t forget hearing Tony Shalhoub (Abe Weissman) and Rachel Brosnahan (Miriam Maisel) debate whether their meal was better at Lost Dog, Burger Mondays or Garage.

My last day on set was 17 hours long, beginning at 8 a.m. and ending well after midnight. I remember walking back to my car in the dead of the night, exhausted, yet unmistakably grateful for this incredible opportunity provided to me by being here in Binghamton.

To the cast and crew of The Marvelous Mrs. Maisel, thanks for coming to our little city in upstate New York. And if you’re wondering, yes, I’d be happy to come back as a principal character in season three.