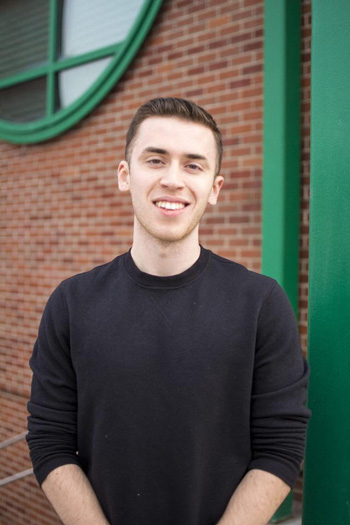 Griffin Mayhew is a senior majoring in history and minoring in education who wants to make an impact on the world through teaching children.

He currently volunteers as a mentor at an elementary school in the Windsor Central School District, where he works one-on-one with a student, Henry*, who was having social and developmental issues after experiencing a personal loss.

Mayhew first learned about the program when Patrick Norris, the CCE's youth engagement coordinator graduate assistant, came to one of his classes to speak about the Binghamton University Community Schools initiative. Mayhew was motivated to get more involved with the community, and Norris connected him to the mentor opportunity with Windsor.

The Windsor Mentor Program is one of several volunteer opportunities and internships that have arisen through a unique partnership between Binghamton University and Windsor Central School District, in which the school district funds a graduate assistant in the CCE, who works directly with Windsor administrators to identify opportunities to connect the rural school district with Binghamton University students and other resources.

This graduate assistant is part of the CCE's Community Schools and Youth Programs team, which develops volunteer opportunities and coordinates student volunteers in a number of local school districts, in support of the Binghamton University Community Schools initiative.

Mayhew fosters a friendship and mentors Henry by playing with him while also teaching him life skills, such as being polite, raising your hand and not interrupting when others are talking.

"The way I set it up for him is that I start the day with him, saying 'Hi' — little formalities," explains Mayhew. "We start playing — we play Legos nonstop; he loves them. And I interject throughout by asking how his day is, how does he engage his friends, like, 'Oh, did you talk to your friends today?' Or when his mom comes to drop him off, I'll say, 'Did you say bye to Mom?' I kind of sprinkle it here and there so it's not like he's getting lectured. He's learning along the way and having a good time, too, so hopefully he'll connect having a good time playing Legos with these life skills."

Since beginning to work with Mayhew, Henry has come out of his shell and is engaging more positively with his peers and others. Michelle Davis, Henry's teacher, says Mayhew "provides a positive role model for [Henry]." Henry is also fond of the arrangement. He says, "Griffin is a great mentor, and he does great things with me."

Mayhew has also gained valuable lessons from this experience and says the biggest thing he has learned is patience. "Nothing happens overnight. You have to go with the flow." He has also learned better interaction skills, especially with children, which he values as he moves forward in his journey to becoming a teacher.

Mayhew, who also works as a substitute teacher back in his hometown, did not always know he wanted to follow this career path. It was something he realized recently. When he initially transferred to Binghamton University in his junior year, he wanted to study political science.

"My whole mindset really was to do something that helps people, helps the human condition [and] makes the world a better place," says Mayhew. "And while politics in some regards kind of does, it's much more cut-throat and not really directly impacting people. And I saw that in teaching — because my mom is a teacher — you're getting down to the nitty-gritty, you're hopefully making an impact on their lives."

Mayhew's favorite moment of the mentorship program was from a recent meeting when Henry received his first set of Legos.

"Someone got him a Lego set. All the other Legos we had were just random Legos we put together — this was his first full set. He was so happy," says Mayhew. "Seeing the smiles on the kids and knowing you're there helping with that, it's worth so much — it's everything."

Volunteer: Students who are interested in volunteering in local schools can find more information on the CCE's Community Schools website.