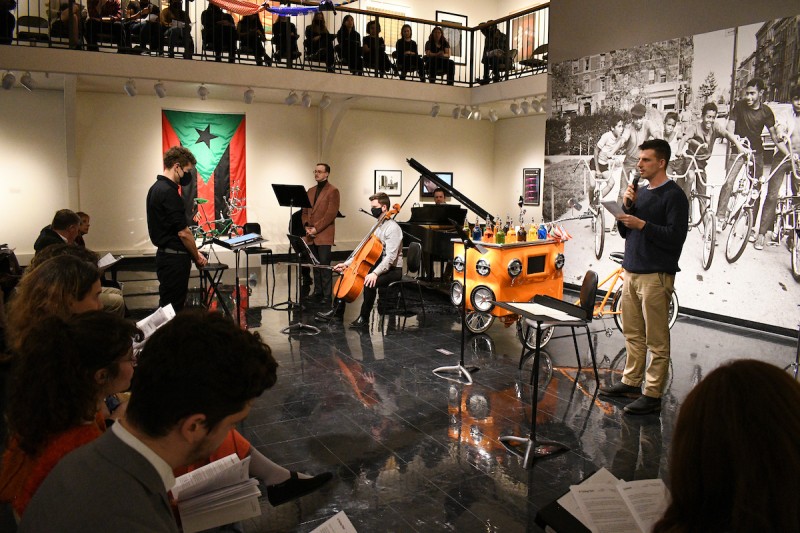 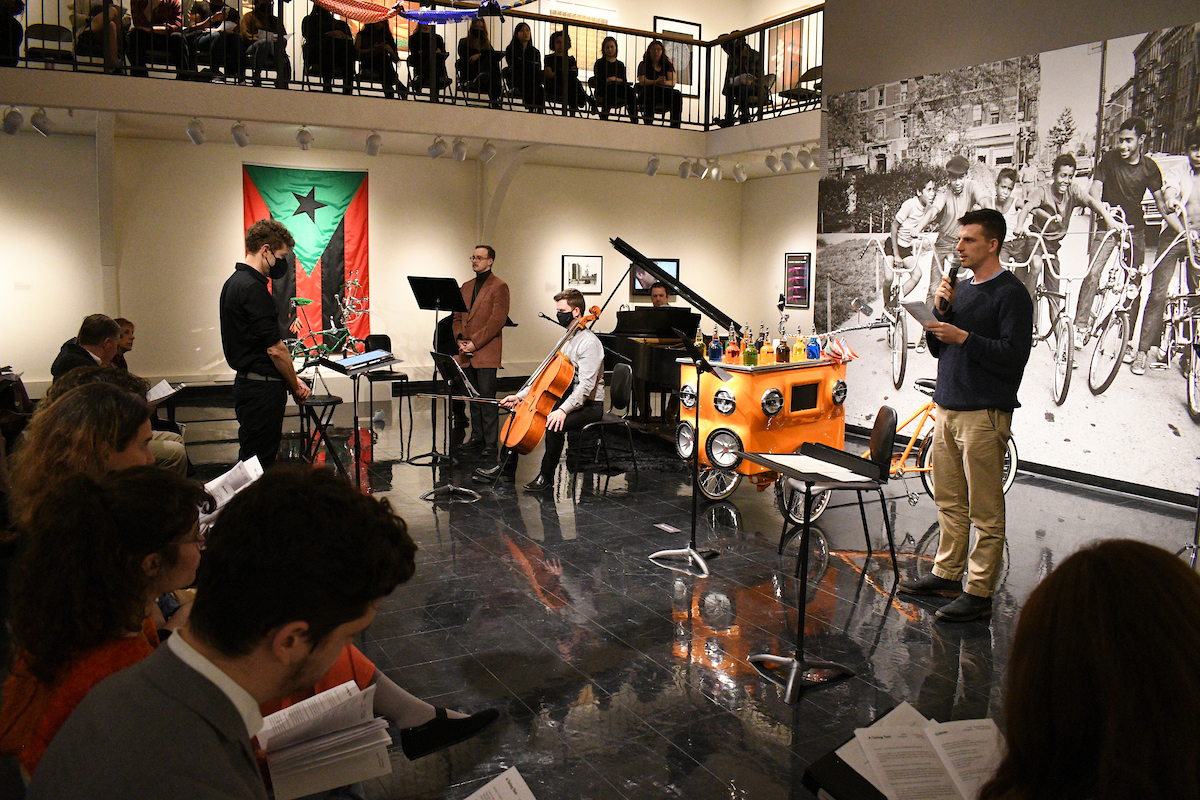 “In what ways do you resemble your mother?”

Graduate student Cole Depuy, the poet behind “A Turing Test,” asks the question again. And again tenor Lex Bonner answers with a recitation of haunting childhood imagery, underscored by a riotous cello and eerie piano chords. A gong trembles, wielded by composer Leif Haley, as the song comes to a powerful end.

It’s a god-eat-god world, Cole, she said. And God eats.

Two days before the April 9 premiere of “Word of Mouth: New Words, Voices and Music,” Binghamton University poets, composers and vocalists honed their musical creations. Co-sponsored by the Material and Visual Worlds Transdisciplinary Area of Excellence, the project resulted from a collaboration between the Music Department and the Creative Writing Program.

Guided by Director of Creative Writing Tina Chang, Associate Professor of Composition Daniel Thomas Davis, Associate Professor of Voice Thomas Goodheart and Director of Choral Activities William Culverhouse, undergraduate and graduate poets provided the initial text, which student composers turned into art songs and other compositions. They were then performed by an array of student vocalists alongside several faculty performers in conjunction with the Binghamton University Art Museum’s spring 2022 exhibition, “Joy, Play and Resistance.”

The 24 teams of poets, composers and performers proved to be so successful and ambitious that the launch was divided into two back-to-back concerts, each with a standing-room-only crowd in the museum’s main gallery.

Junior Alex Walley, a music major focusing on vocal performance, performed “To Regard This Weather with Claim and Wonder” by poet Shannon Hearn and composer Valerie Lasser, which deals with the recovery of the natural world. He is friends with Lasser, a sophomore vocalist and composer who wrote the piece with Walley’s tenor voice in mind — an amazing opportunity for both, they said.

“I know his voice and his style of music,” said Lasser, who both composed and performed works at the event.

In one piece, poet Josh Grosse’s “Push,” Lasser did both, pre-recording six different tracks of herself to create a chorus of angelic voices. The poem draws on Grosse’s own experience going into his final college semester, before circling back to memories of childhood.

An English major focused on creative writing, Grosse also contributed five haiku that explore the meditative experience that became the foundation for Haley’s second composition of the show, “Meditation.”

building walls is not control.

Do not fear your truth.

The ethereal voices of sopranos Riya Bolander and Rebecca Grabarchuk twined around the senior’s enigmatic words, accompanied by the drone of faculty artist Zachary Sweet’s cello and the cheerful tones of a marimba, played by Haley himself.

A junior majoring in both music and psychology, Haley is an accomplished composer with an entire opera already under his belt, in addition to being a skilled percussionist. While working with his poets — Depuy on “A Turing Test” and Grosse on “Meditation” — he sat down with both to make sure he understood the message behind their work.

“The overall tone of the poetry informs what the song is going to sound like,” he explained. “I also consider how the text would be best set in the context of the song, the words, where they fit in the overall register.”

For their part, the poets came to view the work of composers and musicians with renewed respect. That respect went in multiple directions: Bolander, a sophomore majoring in vocal performance and psychology, appreciated the chance to speak with both the composers and the poets about their vision behind the three pieces she performed, she said.

“I’ve never done a collaboration before. Poetry is usually so personal and experience-bound,” Grosse reflected.

It was a new experience for Depuy as well. A doctoral candidate in the Creative Writing Program, the poems he submitted had darker themes. In “A Turing Test,” the speaker — or in this case, singer — responds in a different way to repetitions of the same question; the title refers to a conversational test that can differentiate whether the respondent is a human or a machine. Depuy’s second poem, “We Race in Circles” and rendered into music by graduate-student composer Neva Derewetzky, concerns self-destructive habits such as violence and drug use.

This is the eagle escaping

the forest. This is the lightening

that started the fire.

“It feels like talking to someone in a different language. It’s a give-and-take,” Depuy said of the collaborative process. “I have to trust the musician to respect the poem, but also accept that I am losing the poem to the song.”

Sometimes, that meant compromises. Composer Adrian Finney, a sophomore music major, worked with poet Kiel Gregory on “Stealing from Grandmother,” which concerns the theft of some cigarettes. The poet wanted a heavy metal feel, and Finney did his best to meet him halfway, writing for a single piano played by two people to create fascinating metallic sound effects.

Meanwhile, classmate Alexis Gross, a senior majoring in music, had the opportunity to bring a love poem to life: “You” by student poet Vincent Gialanella, with soprano vocals and cello.

I look at you

And I can’t even describe

What I truly feel

“This is the first time I will be hearing what I composed performed by other people,” Gross said during a rehearsal. “It’s even better than I imagined it would be!”