Decorated mortarboards were all the rage at Binghamton University's nine Commencement ceremonies this past weekend, including this one sported at the Tekes Siyum ceremony held for observant Jewish students. Image Credit: Jonathan Cohen. 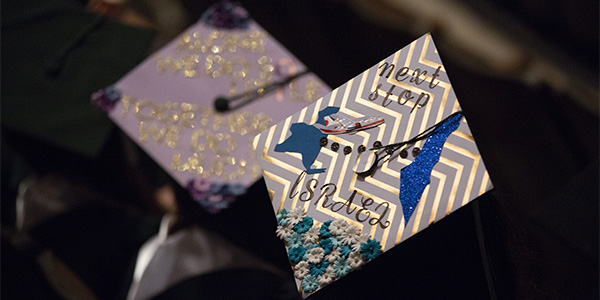 Decorated mortarboards were all the rage at Binghamton University's nine Commencement ceremonies this past weekend, including this one sported at the Tekes Siyum ceremony held for observant Jewish students. Photography: Jonathan Cohen.
By Katie Ellis

Binghamton University President Harvey Stenger shook hands with more than 4,000 students over the weekend, as bachelor’s, master’s and doctoral candidates crossed the stage to receive their degrees.

The nine ceremonies included speakers from the student to the honorary degree-recipient level, as well as remarks by Stenger; Provost and Executive Vice President Donald Nieman; Alumni Association Board President Gary Kibel ’90, MBA’92; the respective deans of each school; and U.S. Sen. Charles “Chuck” Schumer at the 8:30 a.m. and 12:30 p.m. Harpur College Commencements.

Stenger spoke of how the academic year had been marked by tragic losses, observing a moment of silence in remembrance at each ceremony, but also spoke of the joy of the occasion and the stellar accomplishments of the Class of 2018.

Schumer’s inspirational remarks left students with one clear message: Take risks, rise to the challenge and, “Go for it!”

The Tekes Siyum ceremony held Friday morning for observant Jewish students who would not otherwise have been able to attend their graduation due to the Shavuot holiday was a first for the University – and the Friday afternoon Graduate School ceremony saw the majority of the University’s master’s and doctoral candidates recognized.

​Read about the other Commencement ceremonies held May 18-20:

* Harpur College of Arts and Sciences

* College of Community and Public Affairs

From the moment Binghamton University President Harvey Stenger uttered his first mazel tov, to the final mazel tov at the end of the first-ever Tekes Siyum, the audience in the packed Chamber Hall was all in.

After joining in with the singing of the national anthem, the hooting and hollering began for the nearly 50 students who crossed the stage for the ceremony, marking the end of their baccalaureate years.

But first, a moment of silence quieted the audience.

This is a joyous year, yet one also marked by tragedy, Stenger said, as the audience joined him for a moment of silence for those students lost during the year. “Our entire campus community grieves the loss of our young and vital students.

“I’ve grown to appreciate the tremendous contributions you make to our campus through your outstanding academic work, your commitment to community service, and particularly by your religious devotion and commitment to faith,” Stenger said. “Through your faith, you stand apart from most of your fellow students.

“Religion is a positive force in an individual’s life, one that can shape and develop one’s character and values, and just as important, provide a sense of stability and structure that helps one cope with a world that too often is unstable and unstructured.”

Stenger said he was impressed by the way the campus came together as the semester unfolded. “And in talking to students, I found that those who relied on their faith, including some of the students here today, were at the front of the healing process. They had something that kept them grounded, something that gave them an inner strength that quieted their fears
and eased their emotional turmoil.

“You have a special power because of your devotion,” Stenger told the graduates. “This, combined with the outstanding education you received at Binghamton, makes you ready to enter the next chapter of your life optimistic and unafraid.”

Provost and Executive Vice President for Academic Affairs also spoke, calling the graduates “a remarkable group of students” who had the ability to succeed at one of the best public universities in the country and who “embody the balance that makes Binghamton such a wonderful place to work and study.

“You embody the balance that makes it a pleasure…keep us informed of the many accomplishments in your future.”

Speaker Risa Scharf, a graduating senior earning a degree in applied behavior analysis with a minor in education, read from a passage about trees from Ethics of the Fathers, a Jewish work consisting of moral and ethical values.

“And he shall be like a tree planted by the waters, which spreads out its roots towards the stream. All his actions are greater than his wisdom,” she read.

“To understand the true meaning behind this passage, we must look to Binghamton’s motto: ‘At Binghamton, our definition of excellence is constantly evolving,’” she said. “Excellence is not a stagnant term; it is a process and an experience. Each of you have reached for excellence within yourselves, and you went beyond that. The limit does not exist – in regards to your involvement with the Jewish community and our Binghamton community.”

Calling her fellow graduates roles models, “As a community you have demonstrated your commitment in ‘Tikkun Olam,’ repairing the world,” she added. “It’s evident that Binghamton University has helped in planting those roots, and you have all begun to spread out toward the stream. But, as the graduating class of 2018, we must remember to take the rigorous education and all that we have learned here at Binghamton and move forward in action.

“We are like trees, because we are leaving,” Scharf said. “And now we can gratefully use our roots and wisdom, take action and create an overflowing stream of positive impact.”

Nearly 700 doctoral candidates and master’s students were recognized at the Graduate School Commencement Friday, May 18.

After remembering the students who had died this year with a moment of silence, President Harvey Stenger offered graduates congratulations for a job well done. “In my experience, there are few accomplishments that are as challenging – and ultimately, as rewarding, as completing an advanced degree,” he said, though graduate students often have to put their lives on hold to attend school. “As graduate students, you’ve mastered the art of delayed gratification.

“So, when you hear that question everyone has asked you for the past several years – ‘When will you be completed?’ You can answer with pride, ‘TODAY!’”

Graduation is certainly a special event, earned through perseverance and hard work, said Aondover Tarhule, dean of the Graduate School. “Your teachers pushed you beyond the limits of what you thought you were capable of, but you persevered and in the process, you discovered new depths, endurance and a firmer resolve than you thought yourself capable.

“You are not yet at the top of the mountain, but you now have all of the equipment and fear and preparation needed to get you there,” he added.

Three alumni were then awarded honorary degrees: Aaron Mair’84, pioneer of the environmental justice movement; Asunción “Sunny” Cummings Hostin ’90, former federal prosecutor, columnist, social commentator and multi-platform journalist; and Ali Çarkoğlu, PhD ’94, professor, higher education administrator and political commentator. Mair and Çarkoğlu, who made remarks at the College of Community and Public Affairs ceremony Saturday, May 18, each received the Doctor of Humane Letters, and Hostin, who spoke at Harpur 2 ceremony Sunday, May 20, was awarded the Doctor of Laws.

Mair addressed the audience at the Graduate School ceremony.

“My transformation and journey began with my connections here, so I suggest taking up the Alumni Association’s offer for a free, lifetime membership,” he said, before challenging the graduates to work together to improve our world. “It is a pipeline that will nourish you and guide you.”

Mair, who began his work for the environment and sustainability, said his interest in environmental outreach began at Binghamton University while working on a project at a Binghamton park. From there, he built a career in public health and followed his passion for grassroots environmental advocacy.

Immediate past president of the Sierra Club, Mair credited his training at Binghamton and his persistence for developing his ability to mobilize, organize and become successful from the beginnings of the environmental justice movement.

”We built a movement and the technology and resources to bring about change and were able to shape an entire pedagogy that you can now get a degree in,” he said. “It was very clear early on that, with the proper tools and dynamics, we can put together the resources and empower communities. It was my first introduction into connectivity that allowed me to see that all things are connected – politics, resources, economics – and they all feed into how we treat one another and how we treat humanity.

“You’re now graduating at the most significant, strategic time in the existence of this planet,” he added, as he encouraged graduates to advocate for the United States to take a stronger position on climate change. “We run the risk of putting all humanity at risk and your degrees are needed to upload, connect, rejuvenate, restore and rebuild our democracy.”

Mair said swamps and wetlands are the most critical asset for the success of humans and wildlife species and are not to be taken lightly.

“I ask this Class of 2018 to accept the challenge to restore the wetlands through a connected society,” he said. “Interconnections and interdependencies are how we build strength. Lift up the disempowered, weak and disconnected. It will determine whether or not our species has another five generations left without significant struggle.

“This is indeed an exciting time to be alive!”