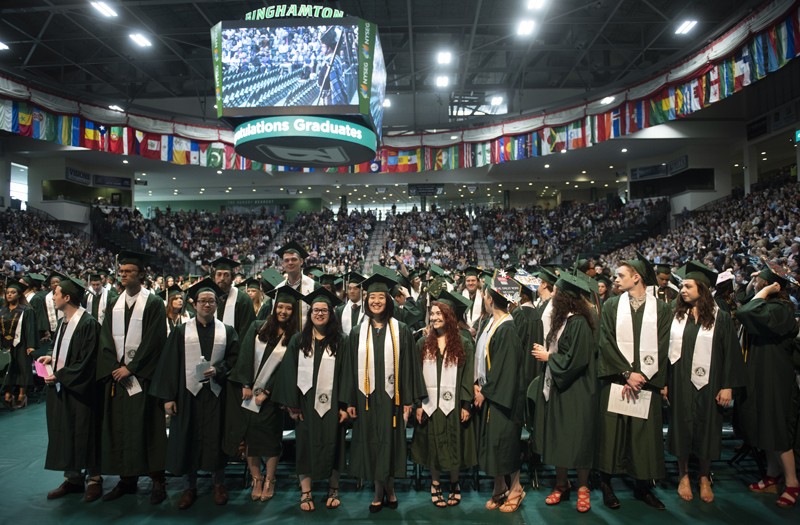 Harpur College students take part in the school's third Commencement ceremony at the Events Center on May 20. Photography: Jonathan King.
By Eric Coker

The world must hear the voices of the Class of 2018, TV personality, journalist and attorney Sunny Hostin ’90 said at a Harpur College Commencement ceremony on May 20.

Chilton welcomed students to the ceremonies by emphasizing the power of the liberal arts.

“Some people may ask you: ‘What can you do with a liberal-arts degree?’” she said. “I hope that you respond: ‘Anything I want.’

“The goal of the liberal-arts curriculum is to both strengthen your intellectual skills and general knowledge and also to help you become better problem-solvers, better writers and better able to express yourself in a wide variety of media. I hope that time at Binghamton has made you feel that you’ve achieved those things and more.”

Hostin described how Barbara Walters started the “The View” more than two decades ago as a way for five women of different ages, backgrounds and different points of view to discuss the “hot topics” of the day.

“The conversation had to be informed, relatable, funny, smart,” Hostin said. “But above all else, Barbara said it had to be civil conversation.” 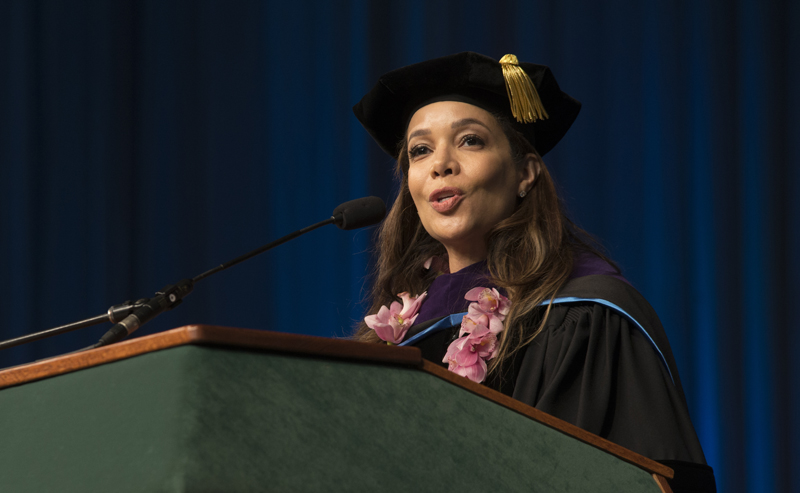 “Although we don’t agree on anything, we do it each and every day,” Hostin said.

Hostin said she sees a lack of civility across the country. That, in turn, leads to a loss of voices.

“It seems lately that our culture encourages us to demonize the other and venerate those who we think are like us,” said Hostin, who also serves as the senior legal analyst for ABC. “We don’t want to listen to people who don’t sound or think the way we do. We want to preach to the choir. Why? Because it is so comfortable.”

People need advocates to speak for them and on behalf of them, Hostin stressed, but it is also important to speak to those on the other side of an issue.

“When it feels like the culture is discouraging us from bridging divides, remember that history will be on your side when you do so,” she said.

“In some small way, I realized my lifelong dream to help save the world,” he said.

Rothbaum, now president of Quoque Capital, offered the graduates “simple words and simple values which define a way of life and a pathway forward to help make the right choice.” They are: moral compass, intellectual honesty, and conviction.

“How prepared all of you are for your future opportunities and the choices you make … will ultimately determine where you land on your own bell curve and just how lucky you truly are toward achieving all of your aspirations and lifelong dreams,” he said.

Byrne, president of Benefit Street Partners, also provided the graduates with real-world career advice. He urged them to embrace the journey, strive to be world-class in everything they do, build a personal database, and stick their neck out for others.

His fifth piece of advice was to “live everyday to the fullest. Cherish family. Enjoy your friends. Do what you love. You never know how long your are going to have.”

“This sounds trite, I know,” he said. “But this came home to me in a big way earlier this year when I was diagnosed with malignant melanoma. … My story has a happy ending. After surgery, I tested negative and am now cancer-free.” 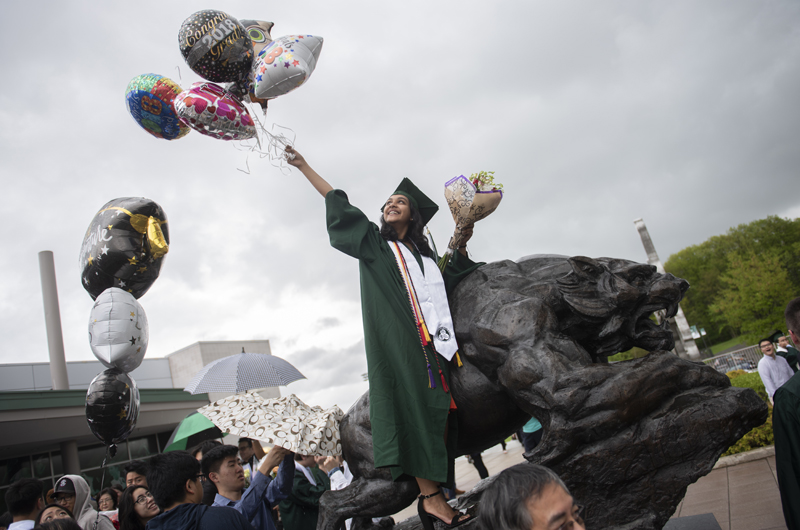 ​Read about the other Commencement ceremonies held May 18-20:

* College of Community and Public Affairs

* Tekes Siyum and the Graduate Ceremony

Student speakers Dillman, Ashdot and Golden all discussed the journeys that now await the Class of 2018.

Dillman, a cinema and English double major, admitted that the future is unknown for many in the class.

“The unknown can be frightening, but there is also a beauty in it,” he said. “Within each and every one of us is the power to be anything we want to be.”

Dillman encouraged his fellow graduates to pursue their dreams.

Like Chilton, Ashdot noted that pursuing liberal arts allows Harpur College graduates to learn in a variety of fields that produce passion and inspiration.

“If we continue to integrate the things we love into our lives … I assure you the challenges that may come will not be impediments, but opportunities for improvement and growth,” the English and Judaic studies double major said.

She also urged her classmates to take risks in those moments when they reach a fork in the road.

“Embrace the unknown, because the unexpected — and our response to it — will be what shapes us and our success,” she said.

Golden, a double major in English and music, also stressed the importance of taking risks and embracing tomorrow.

“We don’t learn from life if we don’t take risks — and that was proven today when we all walked into this room to graduate from the biggest risk we ever took in our lives,” she said. “It’s OK to take risks that change your destiny if it doesn’t match up with what you want out of life. After all, we only get one life — and we only get one lifetime to follow our hearts.”