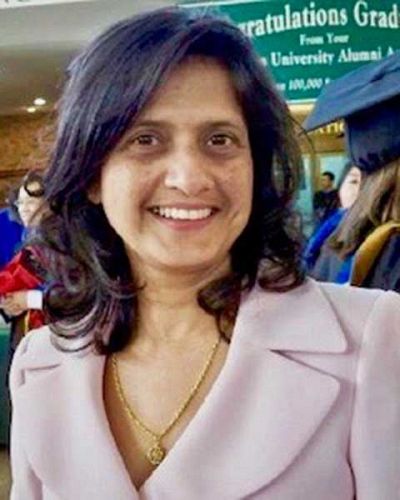 Lakshmi Damayanthi Bulathsinghala is an adjunct Assistant Professor who teaches for the Departments of Theatre; Asian and Asian American Studies; Music; and the program Women, Gender, and Sexuality Studies. She received her PhD in the program in Philosophy, Interpretation, and Culture from Binghamton University. She also holds two MA degrees in theatre: one from her home country Sri Lanka (University of Kelaniya) and the other from Binghamton University; in both places she majored in directing. Her directing activities at Binghamton include Patrick Marber’s After Miss Julie and Lee Blessing’s Independence. Since 2013 she has developed and taught courses titled “Dances of South Asia,” “Introduction to Asian Theatre,” “Dance-Drama Styles in India,” “Introduction to Indian Vocal Music.” “Women’s Lives in South Asia and the South Asian Diaspora,” “Women in Film: World Cultures,” “Imagining Women in South Asia” and “South Asian Culture and Society”.

Lakshmi is a noted performing artist from Sri Lanka where she has been actively engaged as an actress in theatre, television and film. In 2006 Lakshmi directed, produced and starred in the celebrated play Bera Handa, adapted from Sophocles’s fragmentary play Iqneutae by the veteran Sri Lankan playwright, the late Mr. Bandhula Jayawardena. In 2018 she produced and starred in the new television drama series Sulaga Mahameraka, which aired on the Sri Lankan national network; she will be producing and starring in another television series in June 2020. Alongside her artistic and teaching careers she is an active researcher and has presented papers at conferences around the U.S.

Her first publication in Sri Lanka is a book of poetry, Viraha (2018), and she is currently under contract to publish two other books: a work of fiction, Amuththek Awidin (“A Stranger’s Arrival”), and an educational text titled Dakunu Asiyanu Natya Kalawa: Indiyanu Sampradaaya (“South Asian Drama: The Indian Tradition”). She is currently in the process of submitting her first scholarly book proposal in the United States, partially based on her PhD dissertation and titled The Appropriation of Folk Style in Post-Independence Sri Lankan Drama.