When Ben Levine, a first-year graduate student studying geography, began a tutoring internship as an undergraduate, he had no idea it would inspire an even larger project.

In his time at Binghamton University, Levine has been working on a number of local and upstate New York issues, such as food insecurity and environmental health. Originally from the St. Louis, Mo., area, Levine calls Binghamton his adopted home and his love for both the city and its people is reflected in his idea to create and distribute a map of free community meals for students and others facing food insecurity. (more) 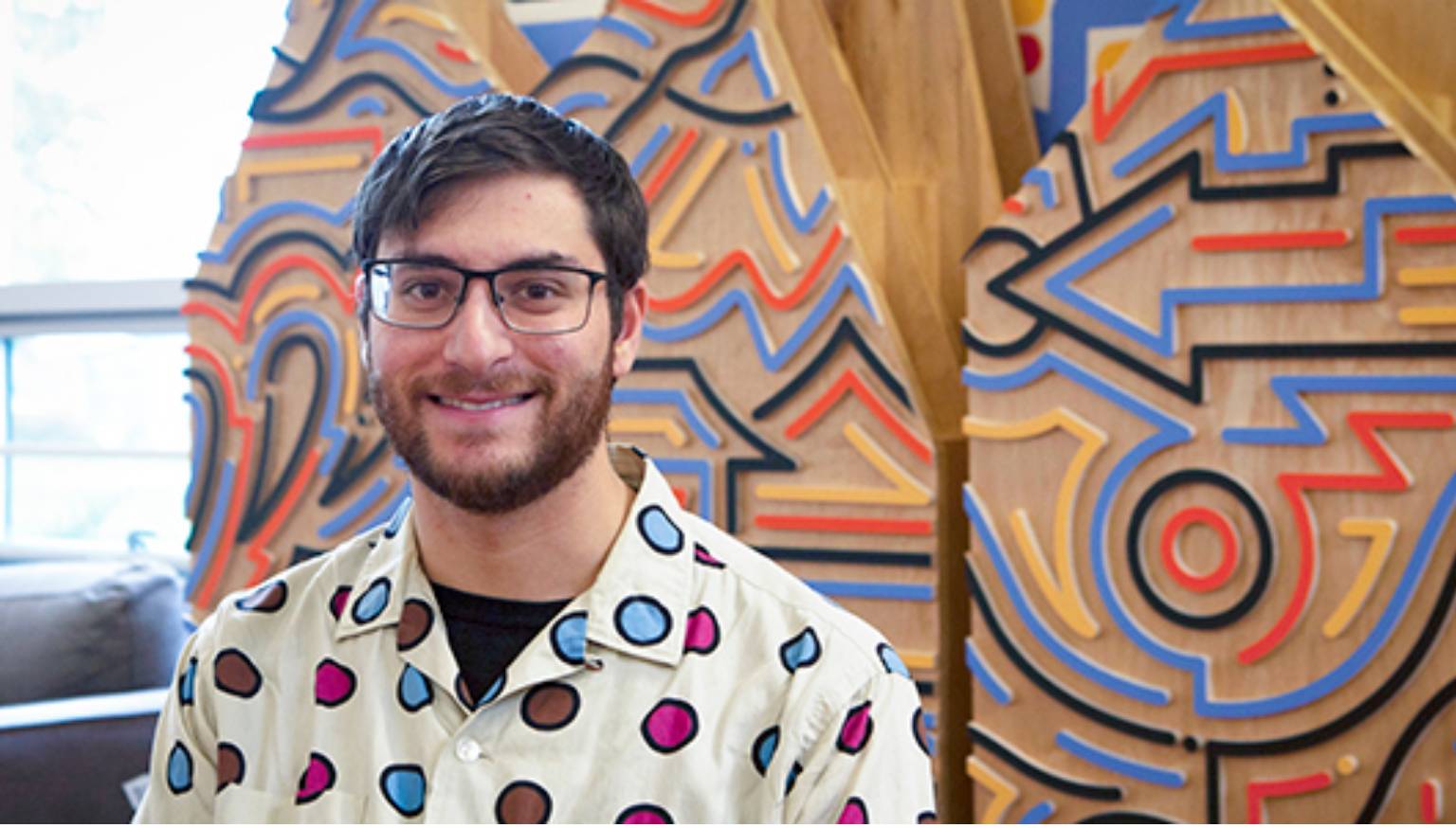 Geography graduate student Ben Levine created an asset map that shows the locations of free meals in the local community. The map makes it easier for those suffering from food insecurity to access meals at no cost. Image Credit: Laura Guerrero.

Congratulations to Professor Mark Reisinger for receiving the 2018-2019 University Award for Excellence in International Education!

This award is a special honor that recognizes exemplary contributions to international education at Binghamton University. 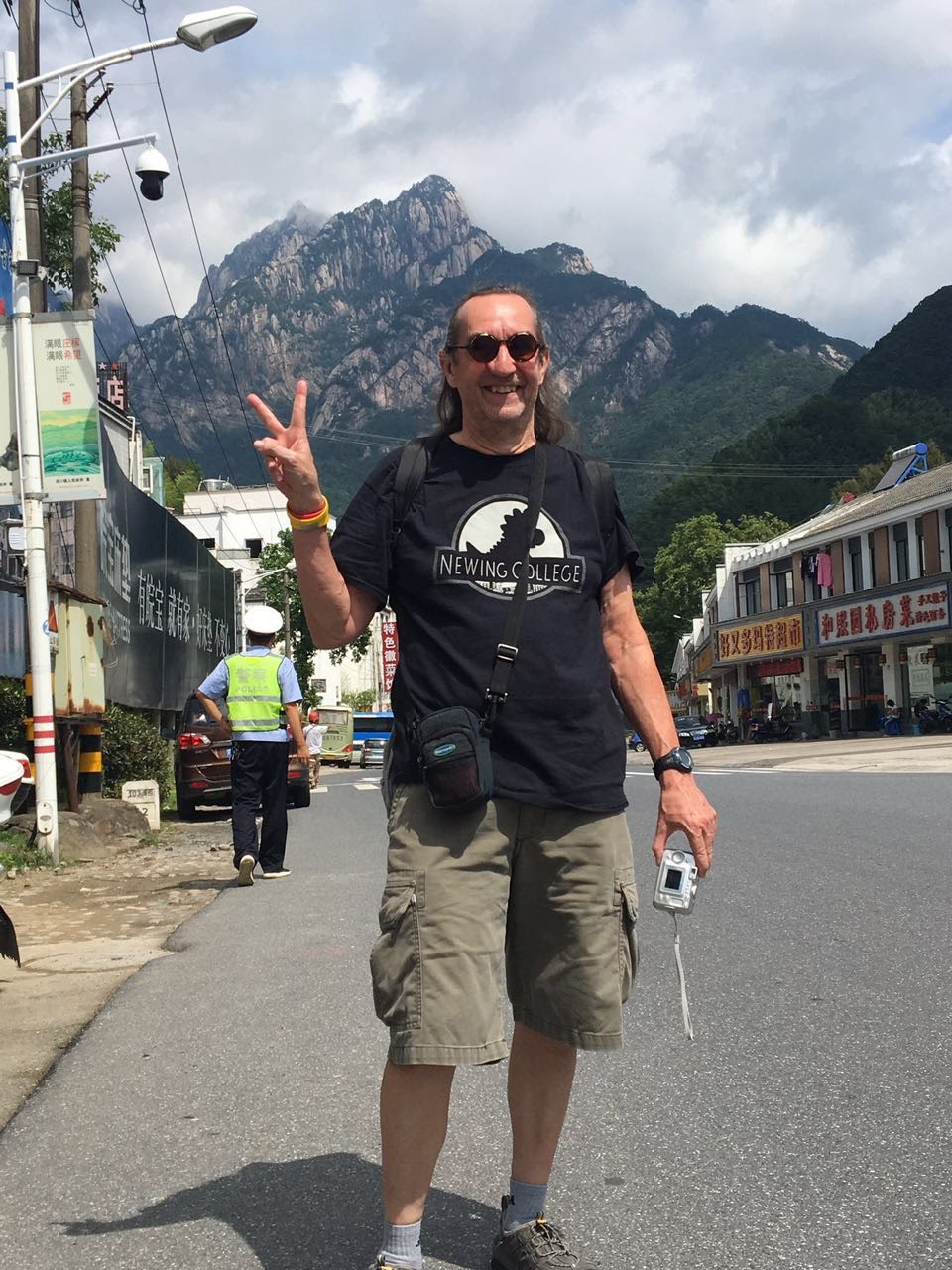 Professor Mark Reisinger at the foot of Mount Huangshan in China. Often described as the “loveliest mountain of China”, Mount Huangshan has played an important role in the history of art and literature in China since the Tang Dynasty around the 8th century. It was named a UNESCO World Heritage Site in 1990 for its scenery and for its role as a habitat for rare and threatened species.

JOHNSON CITY (WBNG) — At the Binghamton University School of Pharmacy, a presentation was given on Johnson City’s resurgence.

Residents came out to hear what updates officials have on the area’s restoration and even learned a little about its history, demonstrating with state of the art technology.

Distinguished B.U. Geography professors John Frazier and Norah Henry were guest speakers. They shared with stakeholders how local businesses are doing. They say in the past few years, many new ones have sprouted up and vacant buildings are quickly being filled, which they say will eventually boost the economy.

“There are more eateries and other things. So those are going to change on Main street. But beyond Main street, Grand avenue, Floral, other parts of the village are gonna change as well,” said Frazier.

The pharmacy school’s dean shared the progress of the school. Along with its initiative to become a nationally renowned school, officials say it is increasing the village’s foot traffic and expect that to rise even more when it becomes fully accredited in 2021.

Frank Tolbert - Geography
Master's student Frank Tolbert's background in urban planning allowed him to develop a detailed understanding of issues affecting Broome County families. His research helped create reports for the county Department of Social Services, and his findings from the Johnson City Redevelopment Project were presented at the Race, Ethnicity, and Place ninth edition conference. Tolbert, a Clark Fellow, is also both a graduate research assistant and teaching assistant, as well as the president of the Geography Graduate Student Organization. 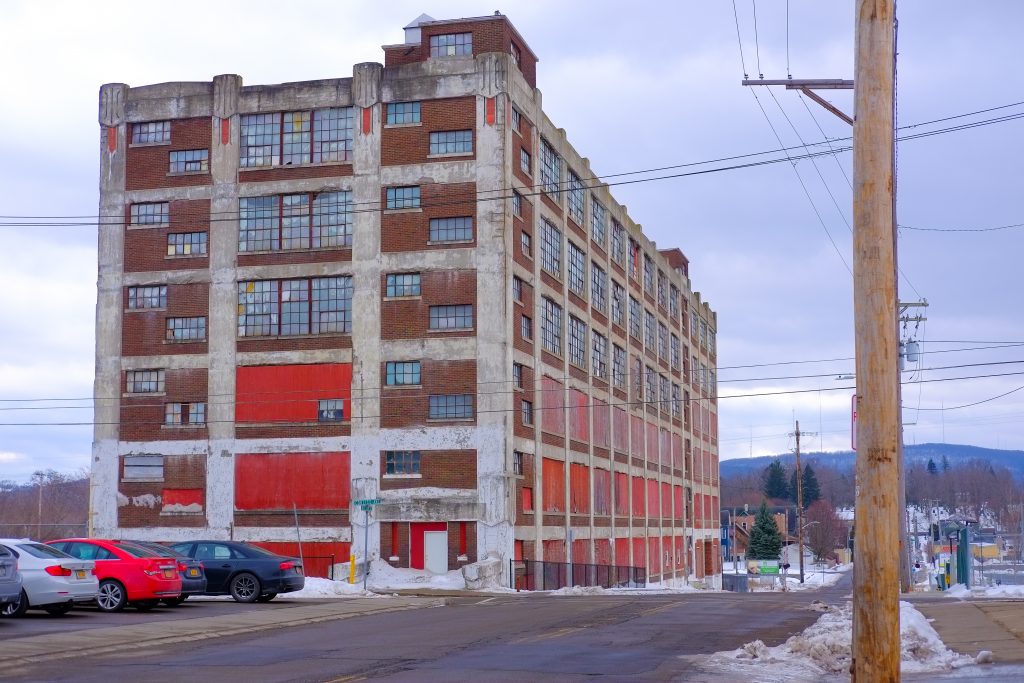 Binghamton University received $30 million from New York state to complete the Decker School of Nursing, which will be housed at 48 Corliss Ave. at the new Health Sciences Campus in Johnson City.

With an extra $30 million in funding from New York state, Binghamton University is on its way to completing the Health Sciences Campus in Johnson City.

The funding, which will help complete the Decker School of Nursing relocation at 48 Corliss Ave., is part of the Southern Tier Upstate Revitalization Initiative (URI) that was created by Governor Andrew Cuomo in 2015.

Professors John Frazier (pictured right) and Norah Henry, Department of Geography, presented "The Revitalization of Johnson City: Monitoring Attitudes and Patterns of a Changing Community" to the New York City Alumni Association on January 25th at the Princeton Club in Manhattan. Approximately 20 alumni attended the presentation.

In 2017, Binghamton's water system served 1,263,688,404 gallons of water to 44,564 people, according to the city's official website. Now, students are starting discussions on whether this water is as clean as it should be.

A panel of five speakers, each experts of different aspects of local environmentalism, took part in a discussion about Broome County's water systems on ... (read more) 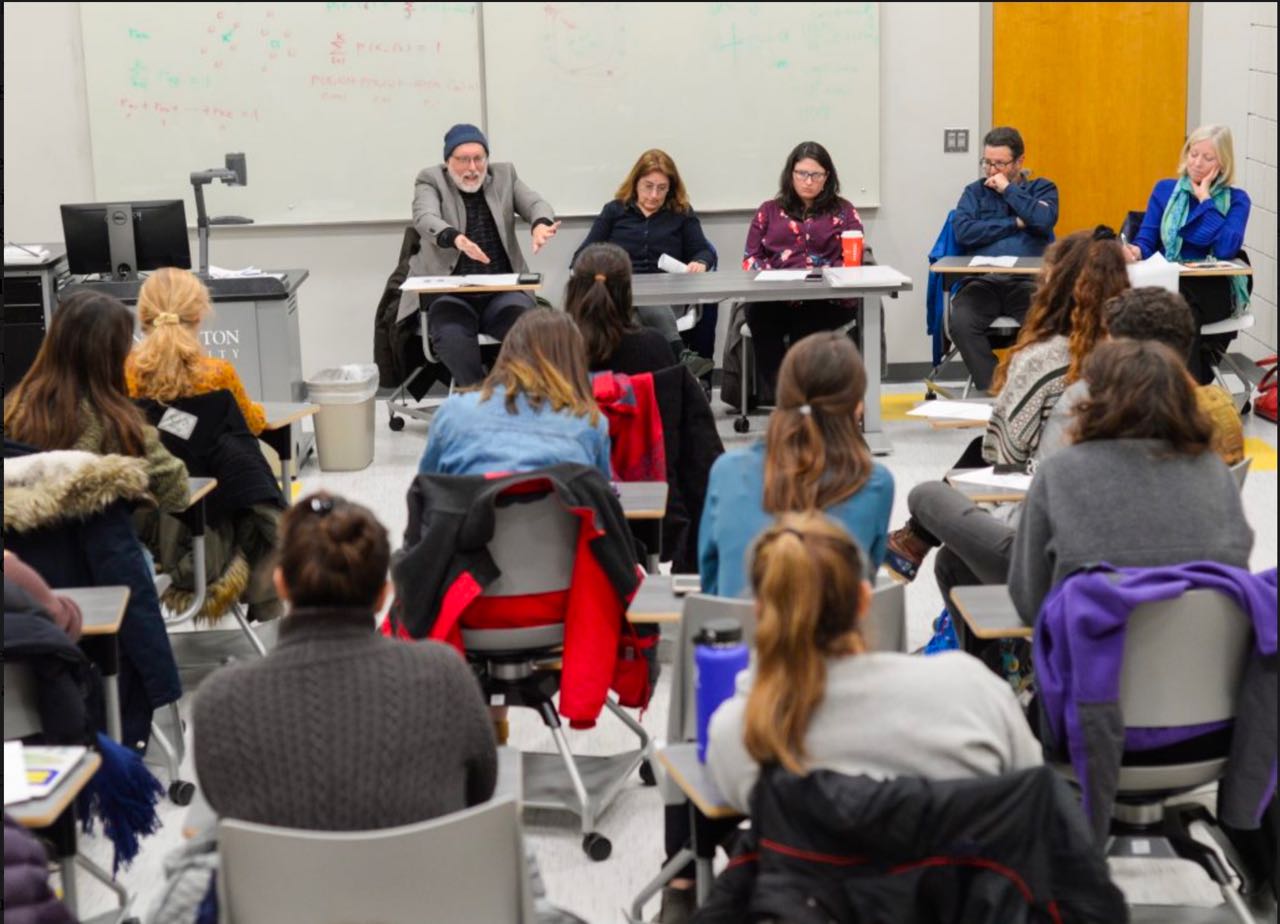 Professor Laura Pangallozzi (second from left) serves as an environmental expert at a panel discussion to educate the community on local water safety, The forum was hosted by Binghamton University's chapter of the New York Public Interest Research Group (NYPIRG).

The Provost's Award for Faculty Excellence in Undergraduate Research Mentoring honors Binghamton University faculty who have demonstrated an extraordinary commitment as mentors of Binghamton's undergraduate students in research, scholarship or creative activities outside of normal course assignments. Congratulations to John Frazier! 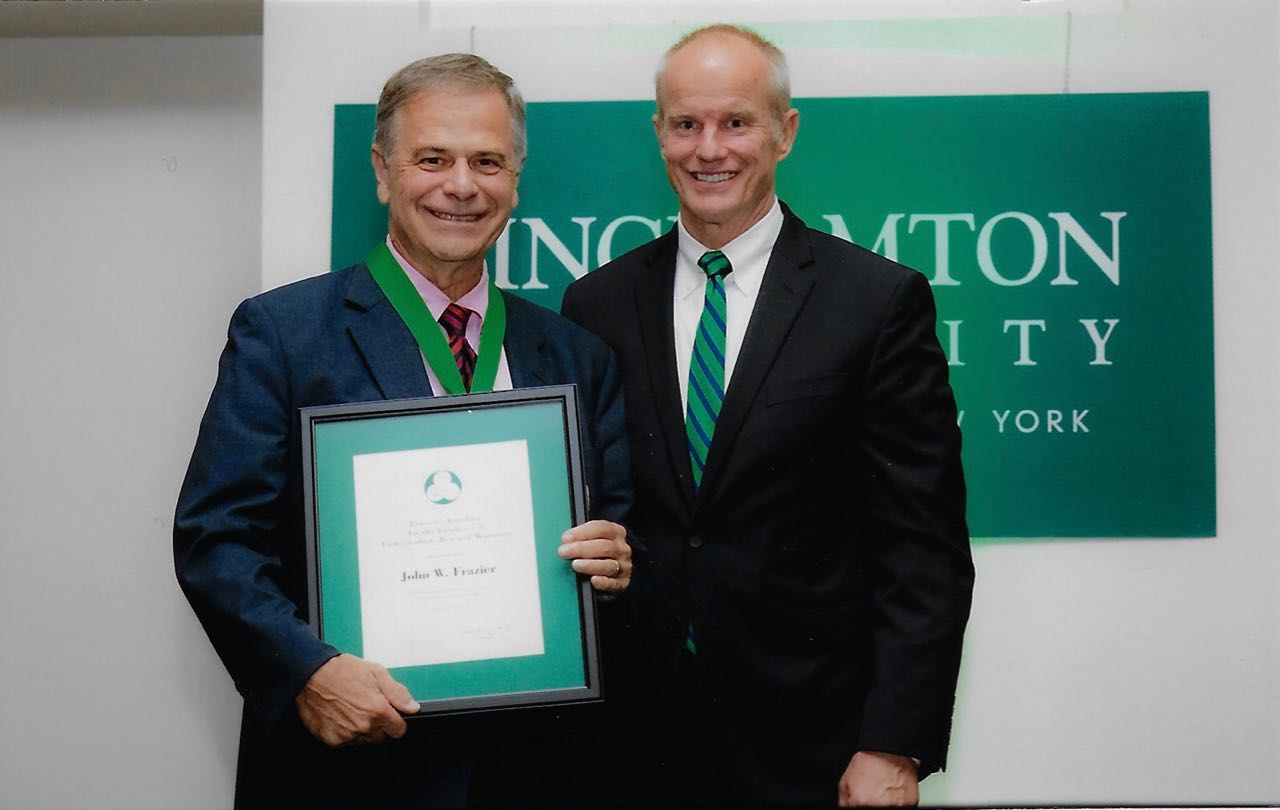 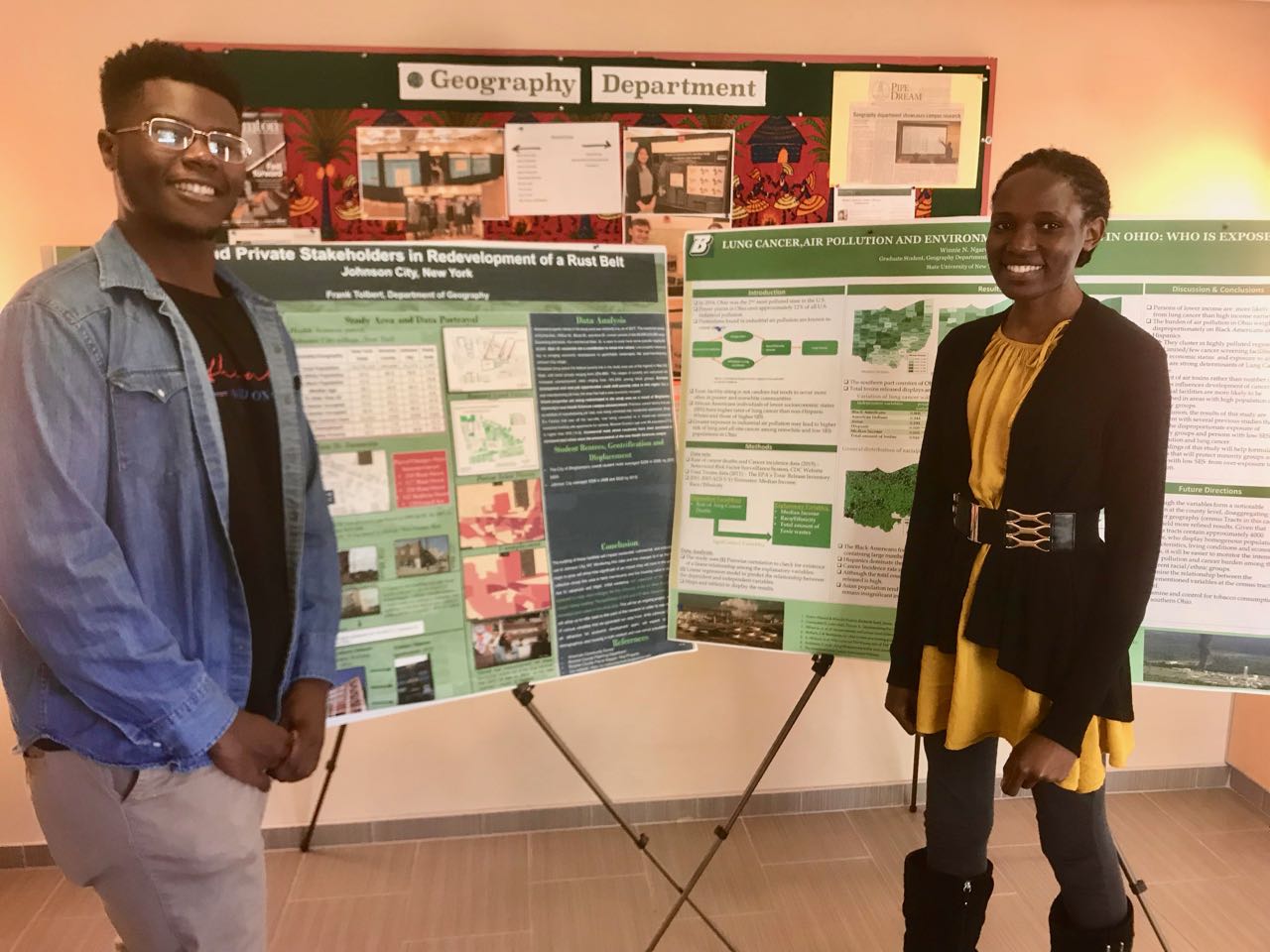 Geography Professor Qiusheng Wu's U.S. Patent Application been officially approved and issued on October 9, 2018. The patent is for a localized contour tree method for deriving geometric and topological properties of complex surface depressions based on high-resolution topographic data (click here for detailed description). 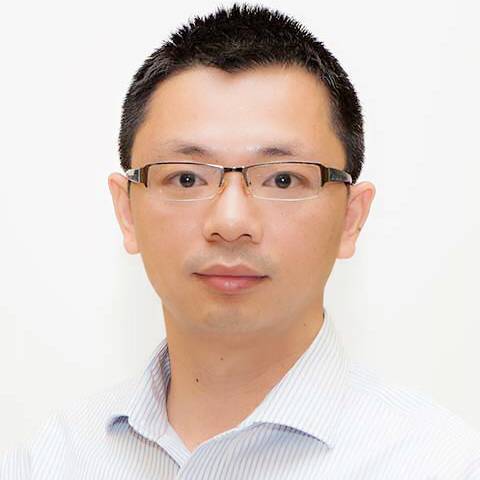 Binghamton Geography, and particularly emphasis on the applied side of the discipline, provided me with a strong foundation with which I developed my career. As my responsibilities shifted to focus on more strategic assessments of our portfolio, the common skill required has been the ability to analyze and interpret data. In an organization where more and more decisions are coming to rely on analytics, having these skills and approaching problems from a spatial perspective has been an asset. I am grateful to the Binghamton University Geography Department for helping me develop these skills.

It is 'cookie time' after a long and productive semester.  Professor Holmes and her students spent the past 16 weeks examining local and regional domains of health and chronic disease, with specific attention to the ways in which urban neighborhood features combine with individual-level behaviors and social interaction to produce health and disease. They tackled issues such as urban planning and policy, social determinants, parks and green space, crime, residential segregation and health care access. Professor Holmes offers this course every year. Be sure to register early as the seats fill very quick! 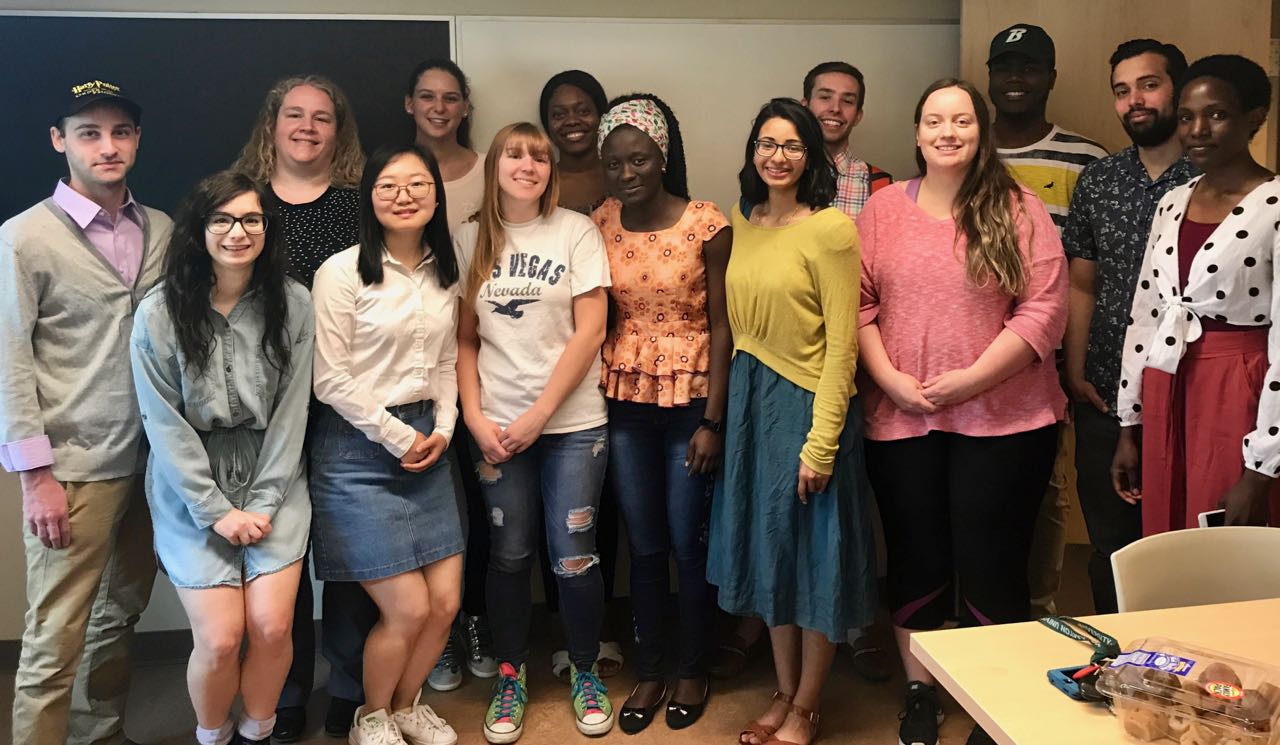 Story map will track changes before, after schools open

BINGHAMTON UNIVERSITY MAGAZINE: April 19, 2018
Twenty-five years from now, some journalist or scholar will want to assess the impact of Binghamton University's Health Sciences Campus on the Johnson City neighborhood where it's being built. Lucky for that person, the research has already started.

The Johnson City Revitalization Project is a story map — an online collection of data, interviews, photos and videos — that documents what's going on today in order to provide a baseline against which future data can be measured. The School of Pharmacy and Pharmaceutical Sciences is expected to open this summer, and the Decker School of Nursing building is under construction.

The Geography Department's Distinguished Service Professor John Frazier is leading the story map effort, with help from undergraduate and graduate students, and geography faculty and staff. The project organizes information in a manner that tells the story of the revitalization process and is able to track changes going forward.... CONTINUE 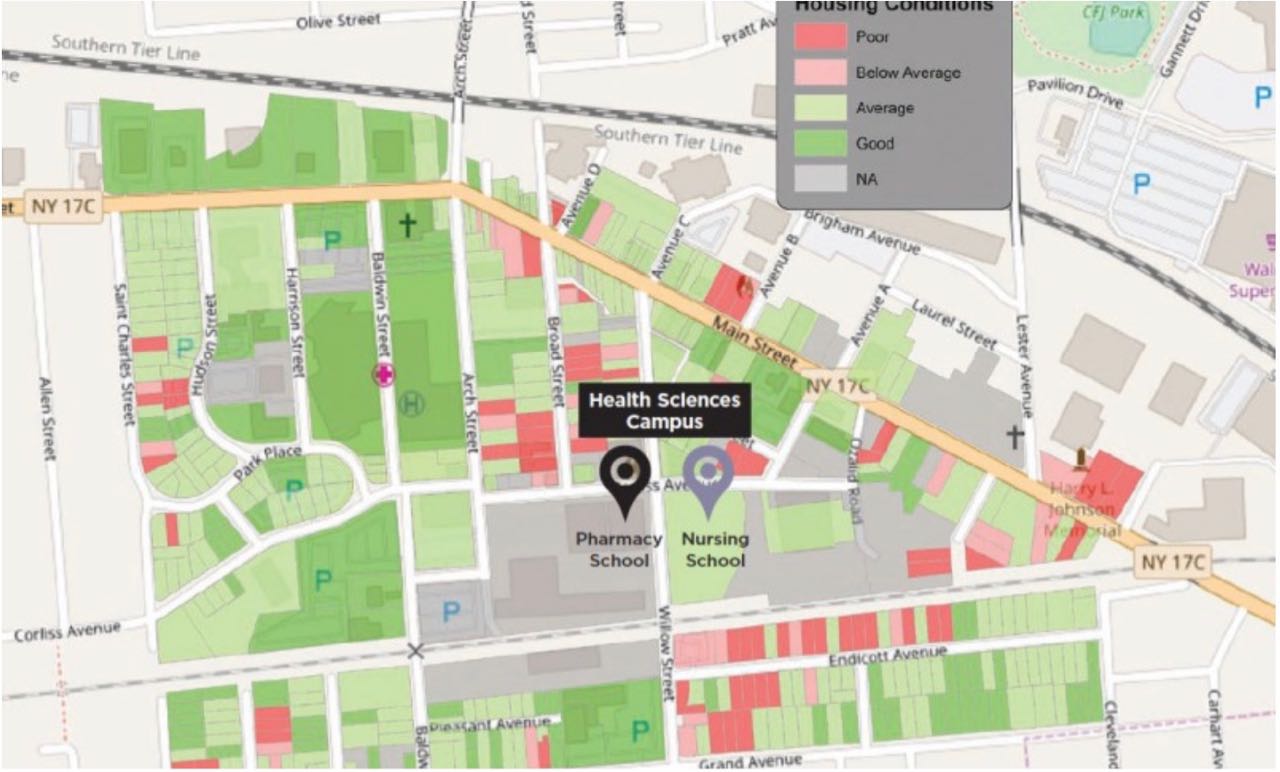 Nine seniors met the requirements to enroll in a capstone course (Geography 482) taught by Professor Frazier in Spring 2018. This "Applied Urban Research" combined urban theory with GIS Story Map to extend a project based in the JC Revitalization Project focused on the Health Sciences Campus to a new study area surrounding the new Koffman Southern Tier Incubator in downtown Binghamton. This very limited introductory research effort will lead to continuing research in the City of Binghamton. These students were invited to showcase their research at an event on May 4 at the Koffman Center.
The students are shown here with Professor John Frazier presenting their research at Binghamton University's Research Days on Friday, April 20th, 2018.

When Li Xi visits a new country, she's not only interested in the culture, but also the physical geography of the area.

"Whenever my parents took me to travel, I was always interested in the topographical history of that specific area," Xi said. "I figured out that I was the only one who was super interested in it."

Now a second-year graduate student studying cartography and geographical information systems, Xi has been able to turn that affinity into a future career... CONTINUE 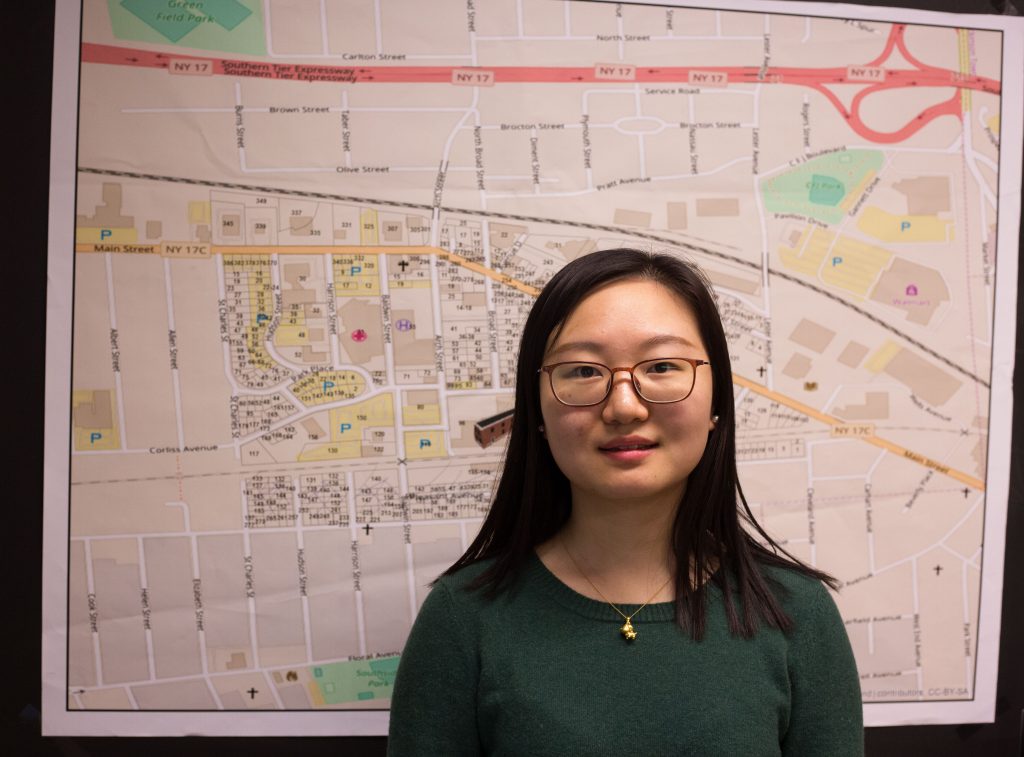 Joshua Gonzalez is part of a team of faculty, staff and students conducting a novel study of the community near Binghamton's pharmacy school. Read More... 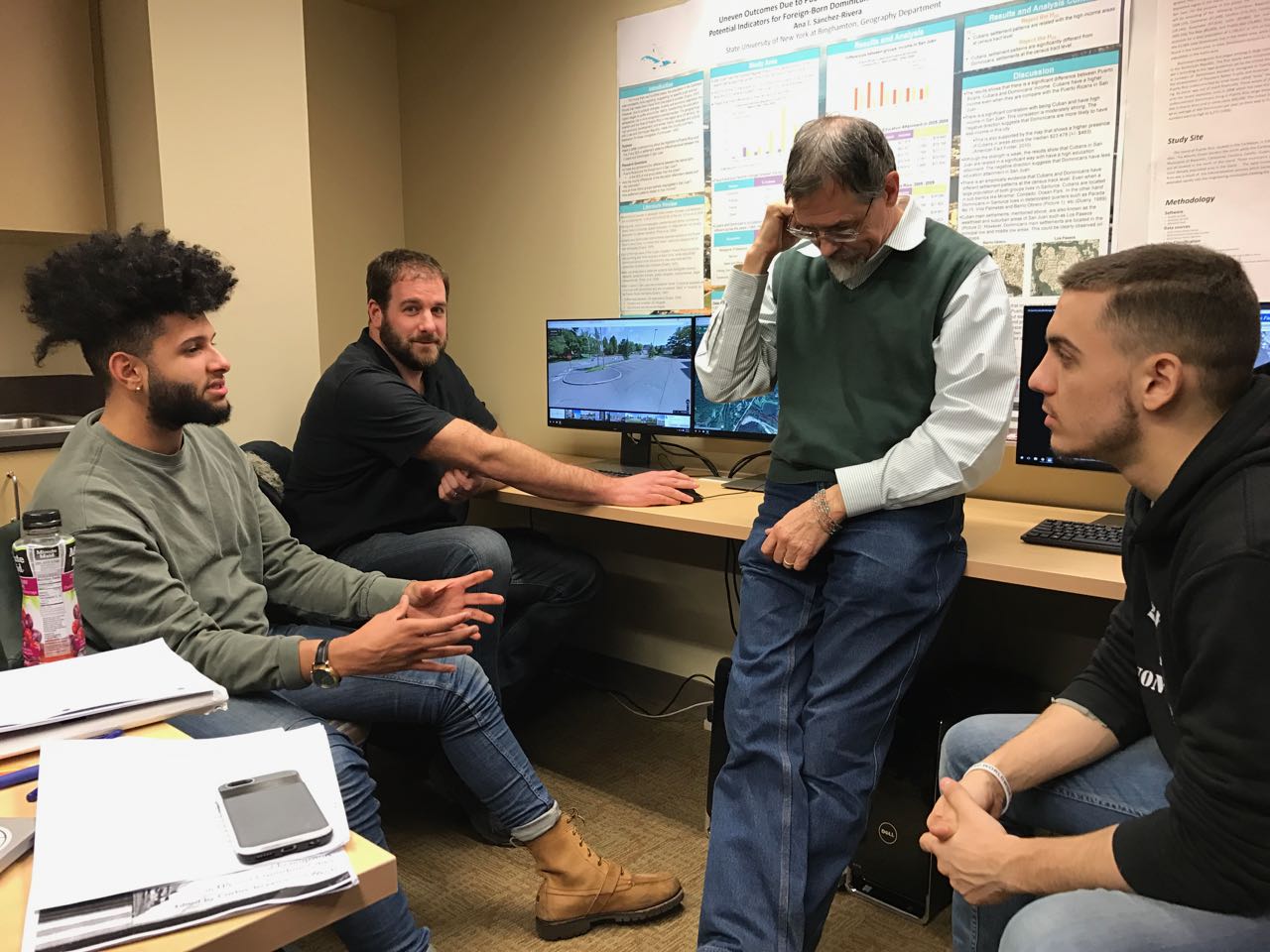 Stenger aims to use system to better local community 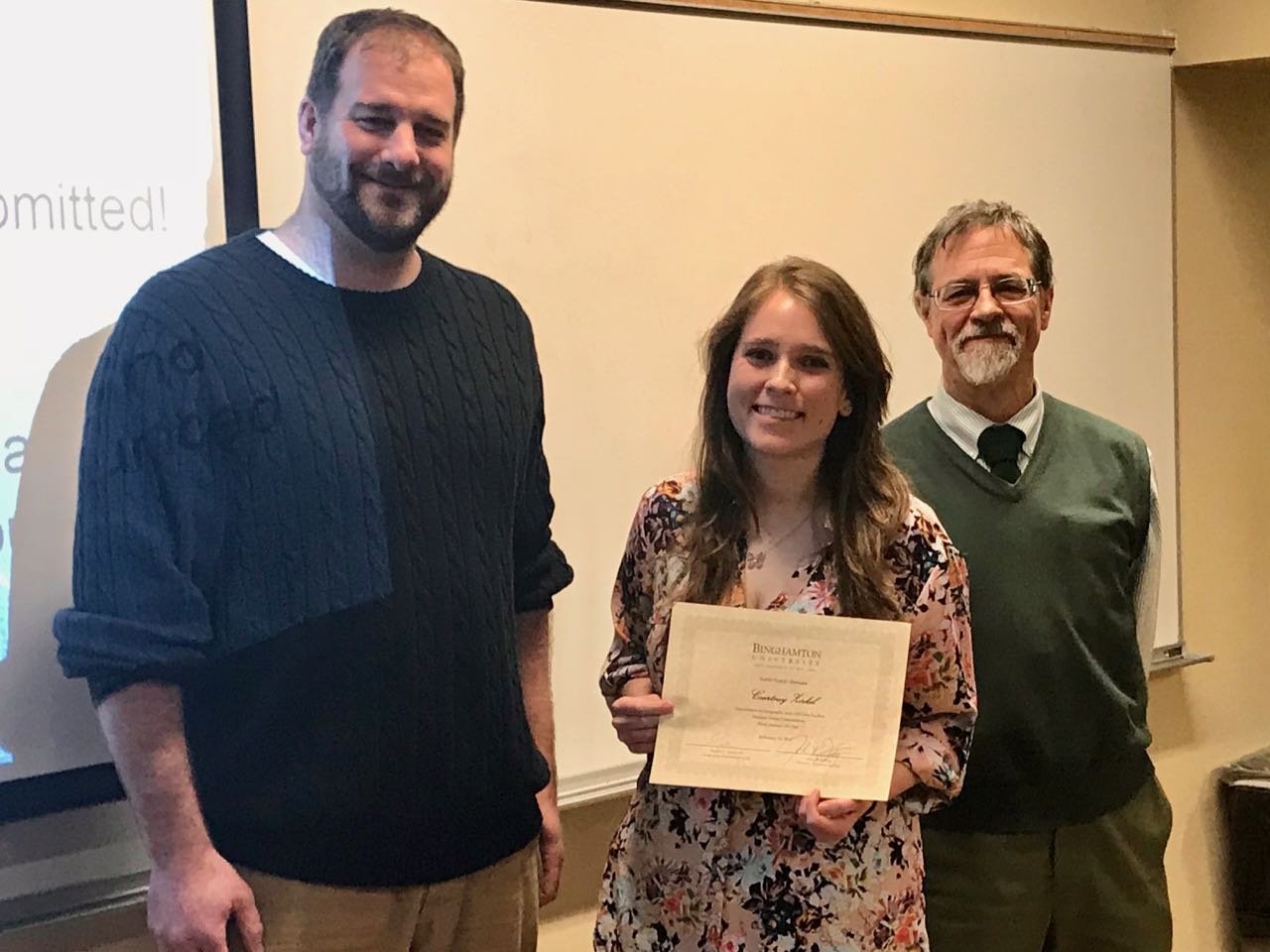 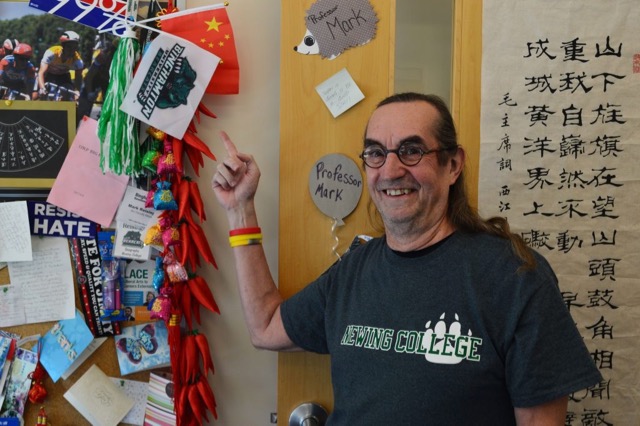 Mark Reisinger, an associate professor of geography, poses in front of his collection of Chinese memorabilia. Reisinger has accumulated many gifts from former URP students, as gift-giving is an important aspect of Chinese culture.

The Chancellor's Award for Student Excellence honors State University of New York students who have best demonstrated and been recognized for their integration of academic excellence with other aspects of their lives, which may include leadership, campus involvement, athletics, career achievement, community service or creative and performing arts. 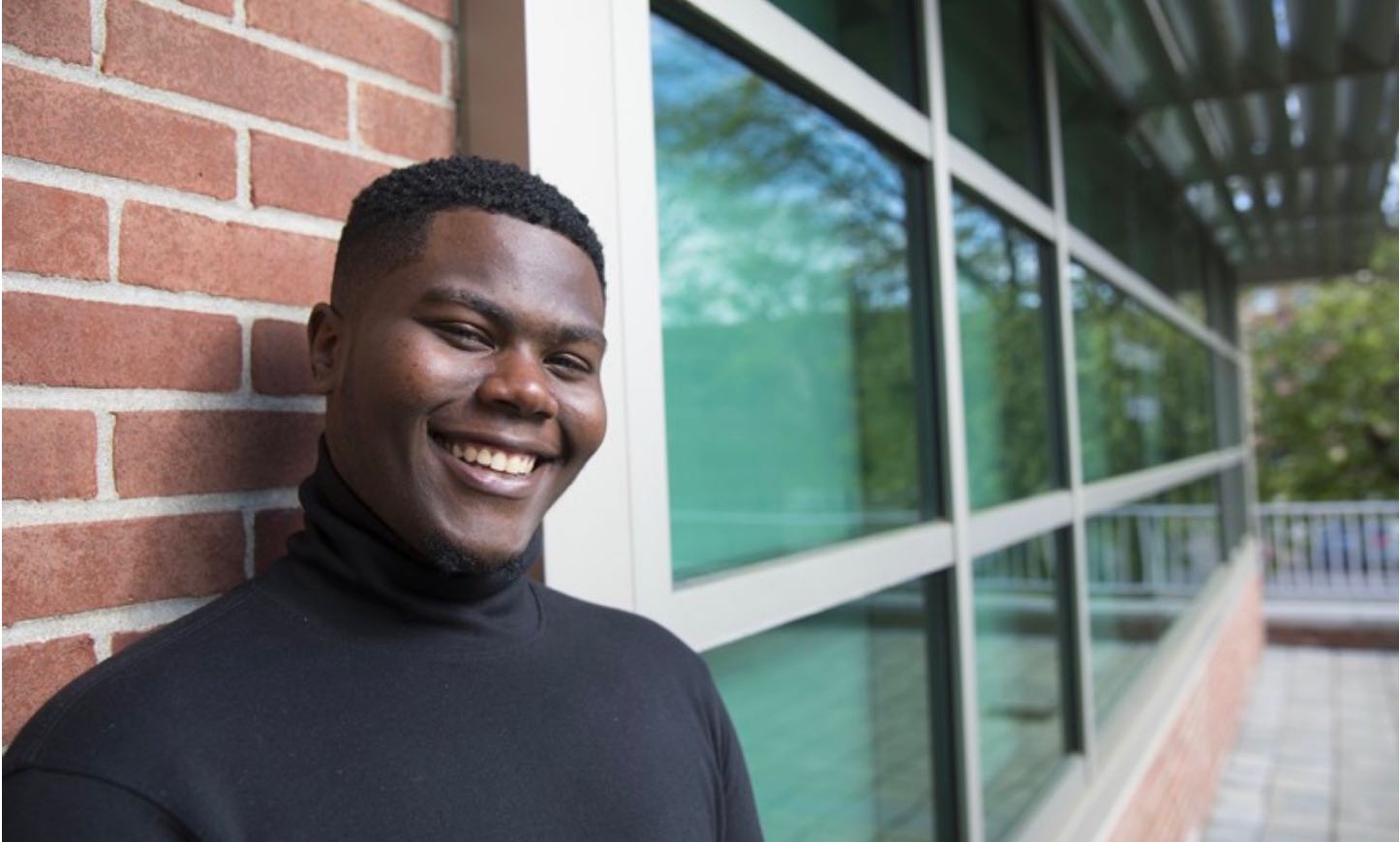 Frank Tolbert received his bachelor's degree in geography from Binghamton University where he is remaining to pursue his master's degree.

Learn more about Tolbert's work and experiences at Binghamton University