Crews from the Public Archaeology Facility (PAF) identified the precontact Beaver Creek I through VII sites in 2013 during a Phase 1 archaeological survey for the NYSDOT in the Town of Columbus, Chenango County (Jacobson et al. 2013). All of the sites are located north of Beaver Creek, with Beaver Creek I-III on the east side of NY 8, and Beaver Creek IV-VII on the west side of NY 8. The seven Beaver Creek sites occupy an important landscape located between a narrow “V” formed by the confluence of the Unadilla River and Beaver Creek. The two waterways are less than 300 meters (984 ft) apart in the vicinity of the sites. Evidence of old oxbows and meander channels suggests that ponds flanked rich wetlands, which formed part of the ancient environment between the two waterways. 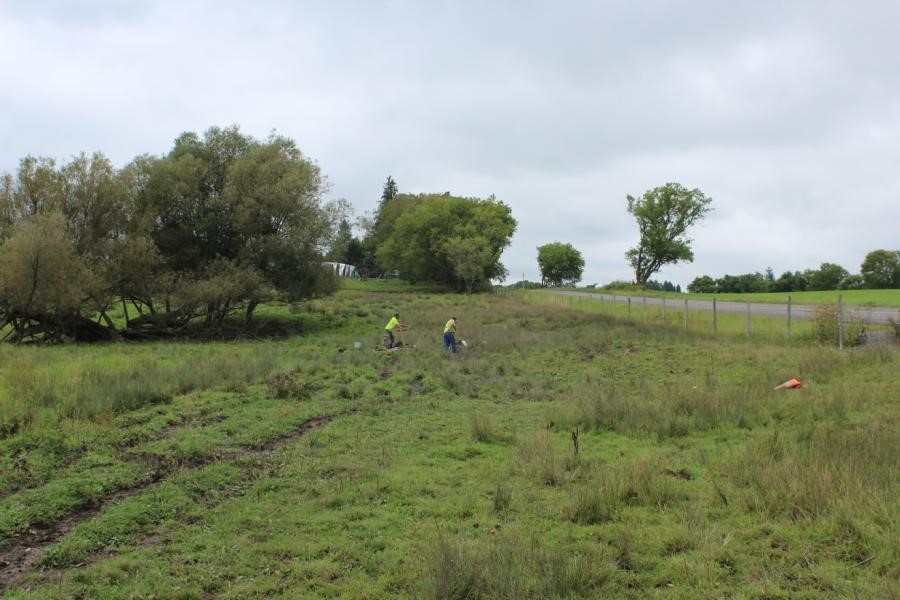 The initial archaeological reconnaissance of Beaver Creek VI produced three Onondaga chert flakes recovered from two positive shovel test pits (STPs). Following the reconnaissance survey, a site examination was requested by the NYSDOT and was completed in 2014 (Jacobson et al. 2015). During the Phase 2 site examination of Beaver Creek VI, PAF archaeologists recovered 14 lithic (or stone) artifacts (one Early Woodland Meadowood projectile point, 12 non-cortical flakes [one burned], and one cortical flake) from five of the six 1 x 1 m (3 x 3 ft) test units and two of the 30 additional STPs that were excavated in a 5 meter (16 feet) grid. The artifacts recovered from the Phase 2 investigation identified two clusters of activity: one cluster in the northern section of the site centered on Unit 6 and a second cluster in the southern portion of the site centered on Unit 4 (Jacobson et al. 2015).

After the Phase 2 site examination in 2014, the Beaver Creek VI site was determined eligible for the National Register of Historic Places under Criterion D (potential to yield information important to history/prehistory), with data recovery mitigation recommended if the future construction plans would adversely impact the site. Plans from the NYSDOT suggested that only a portion of the Beaver Creek VI site would be adversely impacted by the proposed project. Survey and site examination investigations conducted in 2013-2014 estimated that the Beaver Creek VI site covered approximately 752 m2 (8,094 ft2 or 0.08 ha [0.19 ac]). The revised 2019 project area included a reduced area of impacts. Within this revised area, only a portion of the site, approximately 288.5 m2 (3,105 ft2 or 0.03 ha [0.07 ac]), fell within the project limits.

The Phase 3 data recovery field work included excavation of 18 1 x 1 m units placed within the two artifact clusters identified during the site examination (one in the northern portion of the site and one in the southern portion). Excavation units were placed to identify any features (e.g., storage pits, hearths) and gather data on the artifacts within the reduced project boundaries. Data recovery field work also included the mechanical soil removal of 100% of the area within the two artifact clusters to identify cultural features (Kudrle 2018). Archaeologists systematically excavated 22 m2 (237 ft2) during unit excavations in the course of site examination and data recovery investigations. Within the reduced project boundaries for the north and south clusters, 102 m2 (1,098 ft2) of soil were mechanically removed.