Since April 2019 the Public Archaeology Facility (PAF), in partnership with the Rome Historical Society (RHS; Rome, NY), has been conducting a battlefield survey of a French and Indian War battlefield.  Funding for this project was provided through a grant from the National Park Service – American Battlefield Protection Program (NPS-ABPP).  The project’s research goal is to define the extent of the Fort Bull battlefield boundaries. 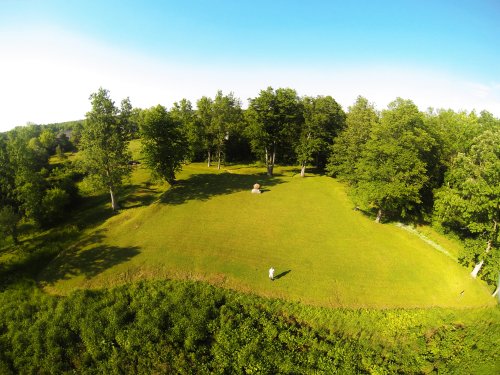 A view of the earthworks and parade ground of Fort Wood Creek, facing northeast.

The attack on Fort Bull on March 27, 1756 was devastating, debilitating, and demonstrative.  The French control of Lake Ontario was paramount to the fur trade with indigenous groups in the Great Lakes region.  The establishment of a small British seasonal trading post at the outlet of the Oswego River beginning in the mid-1720s highlighted the growing encroachment of British traders which diverted furs coming from predominately Onondaga Nation trappers.  By 1755 Fort Oswego garrison and defenses were strengthened in anticipation of an expedition against the French at Fort Niagara.  French military strategists saw the potential threat that Fort Oswego posed to French trade and dominance on Lake Ontario.  Their plan to neutralize the British presence at Fort Oswego set the stage for an attack on the fort’s supply lines.  The honor of command for this military operation was entrusted to Lieutenant Gaspard-Joseph Chaussegros de Léry.  His late winter trek with 362 French marines, Canadians, and Native Americans covered approximately 273 km (170 miles), bringing Léry to the strategic heart of the British supply chain on the Oneida Carry.The subsequent attack targeted the small palisaded fortification called Fort Bull located on Wood Creek.  The violent destruction of the fort and slaughter of its defenders illustrated the fragility of the supply network.  Ultimately, this attack on the Oneida Carry and Fort Bull led to an under supplied, under manned garrison at Fort Oswego when it was captured by Montcalm in August 1756.

The research goal of this project is to identify and document defining features of the landscape that eyewitness accounts noted in journals, letters, or reports written prior to and after the battle.  Using these descriptions from the primary sources, researchers can place the battlefield within the context of the modern landscape.  Researchers utilize a military terrain analysis system for categorizing and organizing defining landscape features noted in the primary sources.  The system is a process used by the military both to describe the terrain of the battlefield environment and to analyze the significance of the terrain. By studying the military significance of the terrain, a person can identify the historic battlefield "hidden" in the modern landscape. Military terrain is analyzed using five key aspects: Key and Decisive Terrain, Observation and Field of Fire, Cover and Concealment, Obstacles, and Avenues of Approach/Retreat.

The most significant defining feature of this battlefield was the English fortification, Fort Bull.  The construction of Fort Bull was completed in November 1755 to secure the western end of the Oneida Carry on Wood Creek with Fort Williams positioned approximately 4 miles east along the Mohawk River.  The remainder of the fall and winter was spent transferring supplies across the carry to Fort Bull’s storehouses and magazine with the expectation that these supplies would be ready for transport to Fort Oswego when the ice broke on Oneida Lake.  In March 1756, Fort Bull was a lightly defended, richly supplied military target.

Following the attack and destruction of Fort Bull, British commanders were directed to reestablish another fortification to secure the western end of the Oneida Carry.  In April 1756 a four-bastion fort with a moat was constructed.  This new post was called Fort Wood Creek and is still visible today under the care of RHS.  However, the French capture of Fort Oswego in August of 1756 prompted the British to destroy all the military fortifications for fear of them being captured by the French and abandon their control of the Oneida Carry until the spring of 1758. 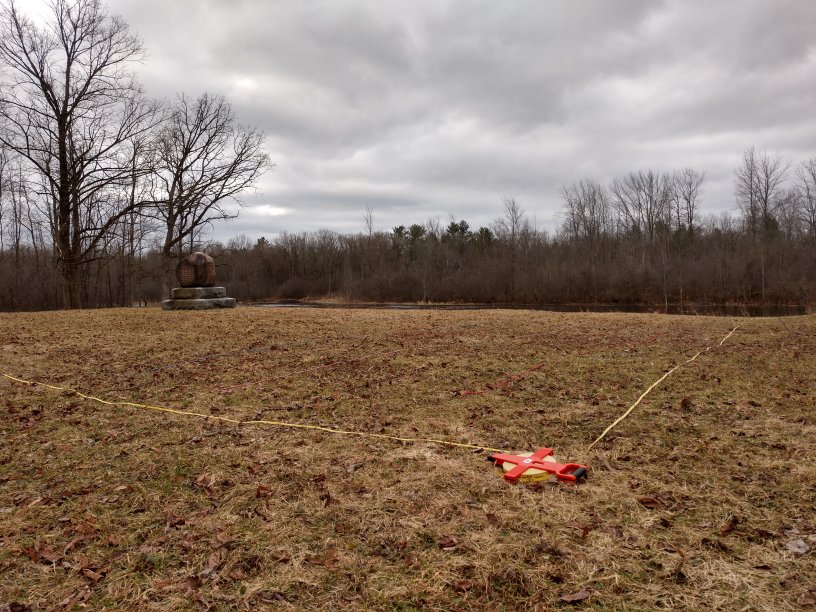 Fort Wood Creek parade ground with the Battle of Fort Bull monument and Wood Creek in the background.

One hypothesis that is being explored in this research project is whether the second fortification was constructed on top of the original Fort Bull location or a nearby location.  Locating Fort Bull and where the battle took place is vitally important since the fort is a key defining feature.  On March 26, 1756 a very vicious engagement occurred at the walls of Fort Bull and eventually within the fort.  Three translated lines from De Léry’s journal were identified as events that would leave an archaeological signature and, if located, could provide evidence on the location of the battlefield.  De Léry mentions the British defenders “firing heavy musketry and throwing quantities of grenades;” “the fort, warehouses and houses explode or catch fire;” and “the bombs, grenades, and cannonballs” are thrown into Wood Creek by the French.  The field methodology is focusing on looking for munitions made from lead and iron, buttons, weapon parts, military accoutrements made from brass, copper, or pewter; a debris field or crater caused by the explosion and evidence of burning; and munitions in Wood Creek.  Locating some or all of these archaeological signatures, in the right context, will be key to locating the fort.

A sketch of Fort Wood Creek as constructed by Major Charles Craven prior to General Webb’s order to destroy the Carry Forts on August 31, 1756 (Mackellar 1756).

PAF and the Geophysics Remote Sensing Laboratory at Binghamton University have employed several different archaeological and geophysical methods to assist with locating the data we need to confirm the fort’s location.  Ground penetrating radar (GPR) is a nondestructive method that uses radar pulses to image the subsurface.  GPR can detect subsurface objects, changes in material properties, and voids. Cesium Vapor (CS-L) Magnetometer is a nondestructive geophysical method for surveying the direction, strength, or relative change of a magnetic field at a particular location.  The instrument can measure the earth’s magnetic field altered by the presence of archaeological features and artifacts, such as soil disturbances, burning activities, or metal objects.  Micro-fabricated Atomic Magnetometer on UAV Platform measures the vector magnitude of the magnetic field which is not affected by sensor orientation.  The instrument is enclosed in a specifically designed aerodynamic UMT MagPiuke-1 Platform lifted using a DJI Matrice 600 hexacopter UAV.  This platform was used to survey Wood Creek which is not accessible to traditional terrestrial platforms. 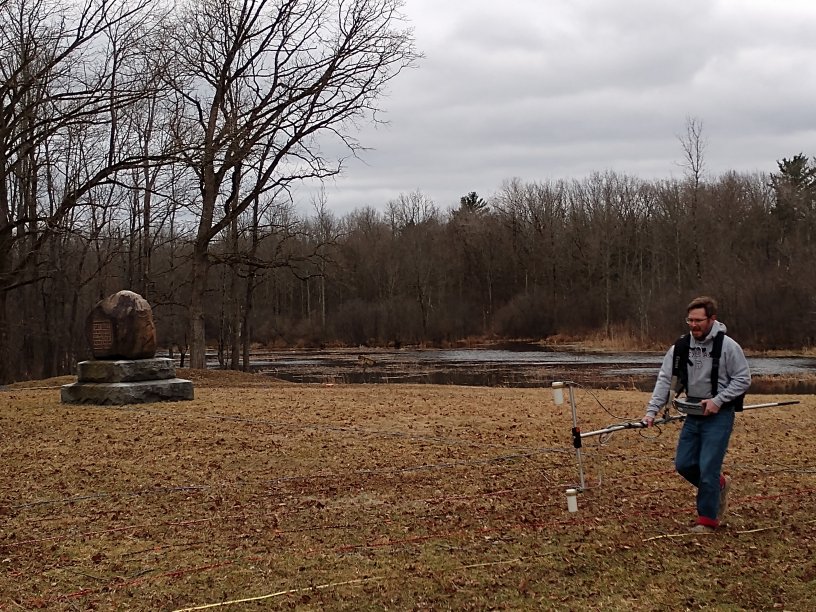 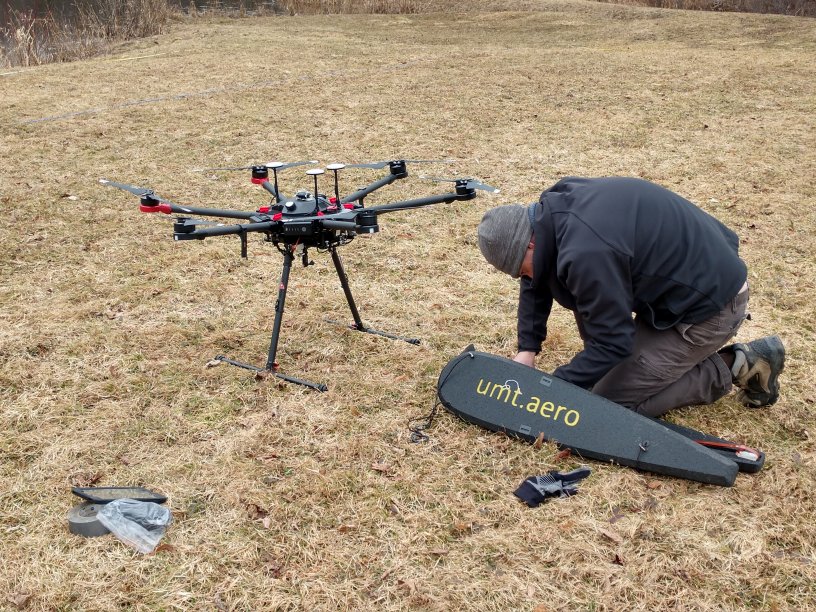 Archaeologists also completed a metal detector survey to sample the near surface metal artifacts.  We sampled a 2 m (6 ft) transect every 8 m (26 ft) across the property owned by RHS. 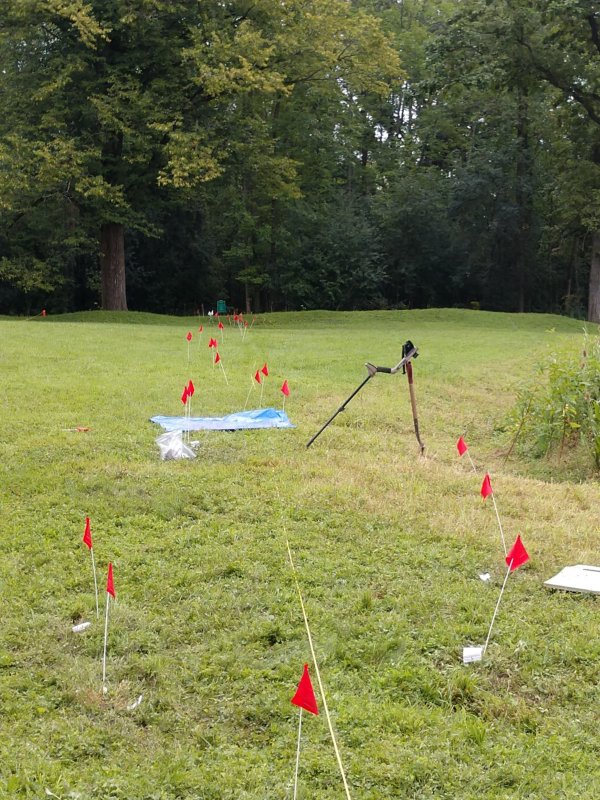 Metal detection produced some intriguing results that appear to reflect that archaeologists are within the core of the battlefield.  The recovery of British grenade fragments, fired and dropped British and French musket balls, and artillery ordinance found on the shoreline of Wood Creek and within a buried A-horizon context is encouraging. 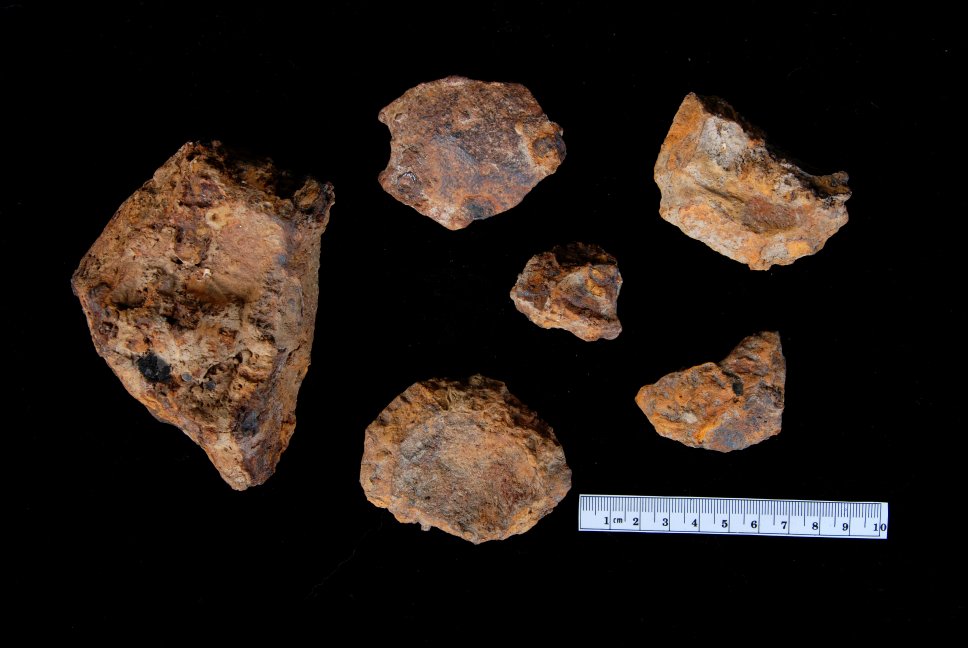 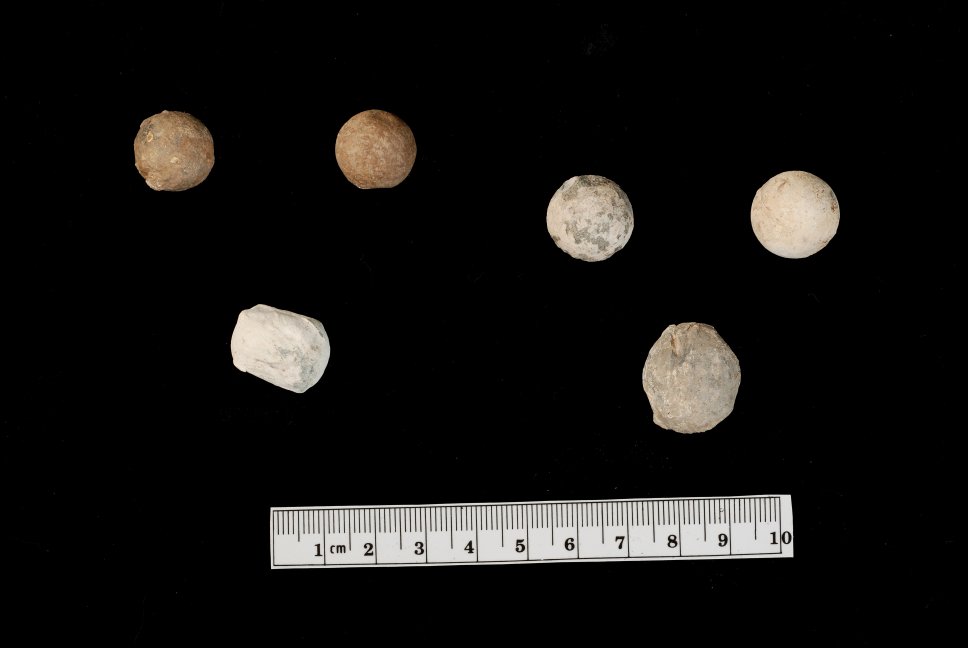 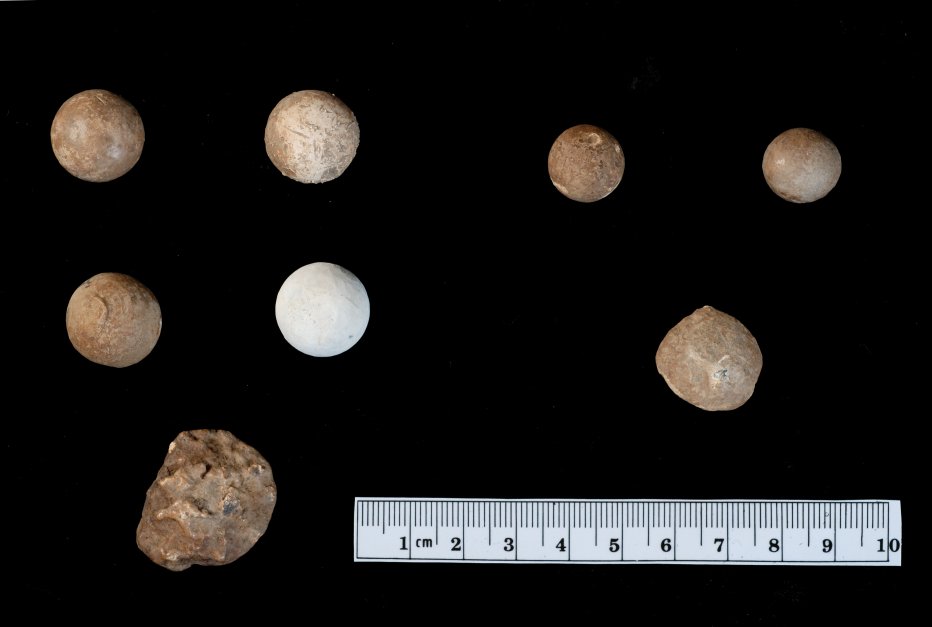 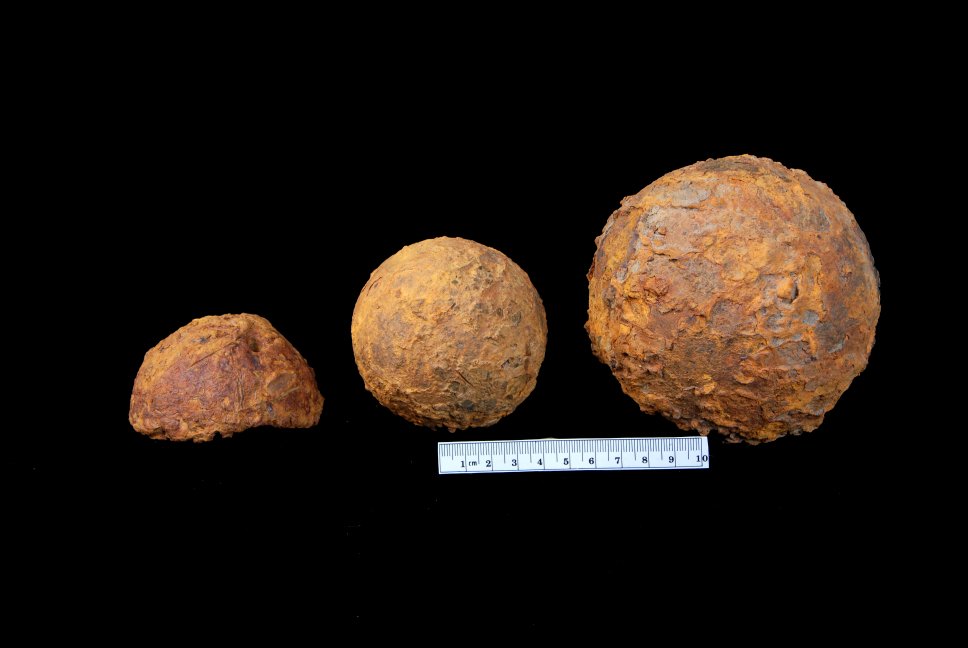 British 6 and 12-pound cannon balls recovered during the metal detector survey.  This ordinance was destined for Fort Oswego as no cannon were mounted at Fort Bull or Fort Wood Creek.

PAF archeologists excavated eight 1 x 1 m (3.3 x 3.3 ft) test units to sample potential subsurface anomalies identified during the geophysical survey and to sample the archeological integrity inside and outside of the Fort Wood Creek earthworks. Archaeologists recovered mainly architectural materials (nails, brick, window glass), but also food-related items, clothing, tools/arms, and smoking items.  Several artifacts recovered date to the seventeenth century - two scratch blue stoneware salt glaze tableware/teaware sherds (1750-1775) and a fragment of salt glaze stoneware tableware/teaware cup or bowl (1750-1775). These are most likely associated with the short occupation of Fort Wood Creek during the summer and early fall 1756 or the reoccupation of the site starting in 1758.

Archaeologists identified a charred timber (Feature 2), interpreted as either a portion of the palisade or a timber associated with a structure from Fort Bull. The presence of a fired French lead ball and the recovery of a broken 6-pounder solid shot from the same horizon, which was capped by the clean fill associated with the glacis construction of Fort Wood Creek, is evidence that the soil horizon of Feature 2 dates no later than August, 1756. Due to the resulting destructive force of the powder magazine exploding and the fires that destroyed Fort Bull on March 27, 1756 it is unlikely that the wood plank (Feature 2) was found in situ. The plank was probably deposited either by the force of the explosion or was moved there during an early phase of site preparation prior to the construction of Fort Wood Creek.

The preliminary study into the Battle of Fort Bull has introduced the well documented history of the Oneida Carry. The limited geophysical and archaeological survey produced archaeological evidence that the survey area within the RHS property contains important evidence of the battle that occurred on March 27, 1756. Archaeological data found within sealed stratigraphic contexts, and artifacts such as grenade fragments and fired French lead balls indicate that the survey has identified a portion of the battlefield. Future archaeological survey will search for more buried evidence of the Fort Bull structures that remain. Partners and stakeholders are currently planning to continue our research and preservation of the Fort Bull Battlefield and the cultural resources of the Oneida Carry.

In August 2022, PAF was awarded a second ABPP Preservation Planning Grant. The grant will allow archaeologists to confirm the presence of the original Fort Bull and any remaining associated battlefield features. As part of this effort local stakeholders, including Veterans and Indigenous descendants, will participate in a community stewardship program that will help advance the preservation and interpretation of the Fort Bull Battlefield. Check back for updates about this phase of our research.

The Fort Bull - Fort Wood Creek site is private property solely owned by the Rome Historical Society (RHS). However, anyone wishing to access the fort may do so by first contacting RHS at 315-336-5870 or info@romehistoricalsociety.org. Please note: All access is controlled and any unauthorized access is strictly prohibited.

1756       PLAN of the FORTS at the Onoida or Great Carrying Place in the Province of New York in America built by Major Charles Craven by Order of General Shirley Commander in Chiefe of all His Majesty's Forces in North America; and Destroyed by Gen.l Webb 31st. August 1756, before they were finished, also of General Webbs Encampment within his Entrenchments & Great Works, which he quitted 1st. September 1756 & Retreated to the German Flatts.  British Library Collection, London, UK.  Accessed May 29, 2020.