Archaeologists from the Public Archaeology Facility (PAF) first identified the Precontact Denton Reed II site (SUBi-2709) in 2002 during a Phase 1 archaeological survey for a proposed gravel mine in the Town of Unadilla, Otsego County, New York. The project called for the development of a roughly 16-acre parcel for an expansion of the Earl Road Gravel Mine.

The site is situated on an elevated gravelly terrace of Chenango gravelly loam soils at least 30 m (100 ft) above the Susquehanna River near its confluence with Sand Hill Creek, in the Town of Unadilla. The site is located on the east side of Earl Road, within the northeastern portion of a plowed field at an approximate elevation of 347.5 m (1140 ft) ASL.  Diagnostic material culture suggested that precontact communities used these terraces repeatedly throughout time, starting as early as 2500 B.C. (the Late Archaic Period), and returning during the Transitional Period (as early as 1500 B.C.), the Early Woodland (1000 B.C.), and also very briefly during the historic period (post-A.D. 1650). Evidence suggests that people used these elevated terraces for short-term resource processing and possibly hunting activities.

Browse the following pages to learn more about the rich history uncovered at the Denton Reed II site. 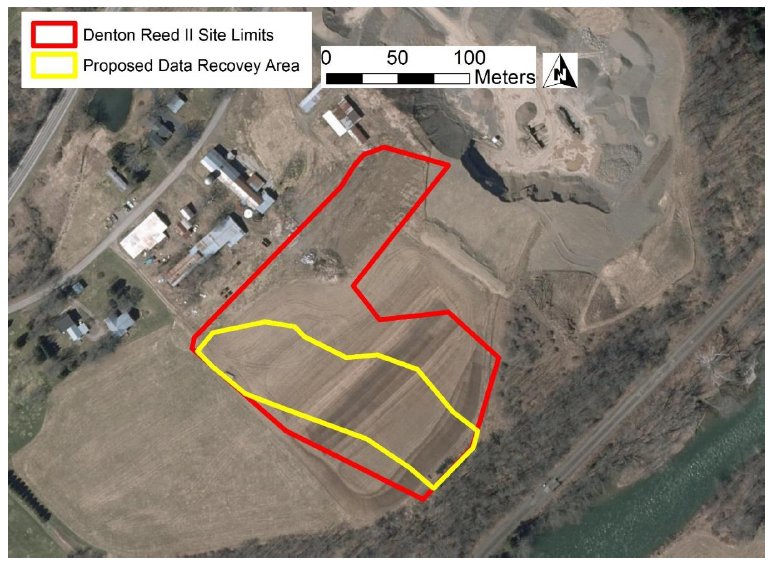